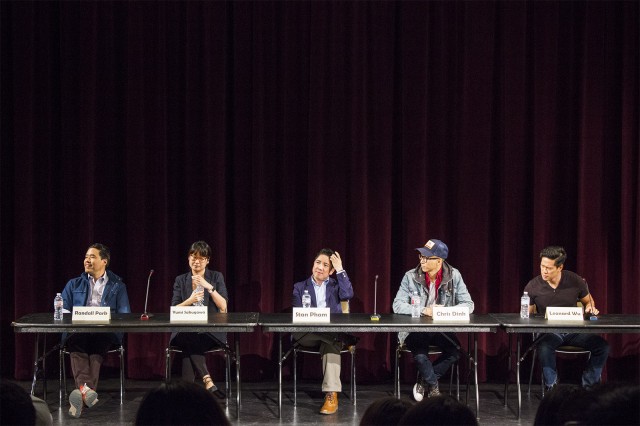 For the new year, Daily Bruin A&E writers share what made their reporting experiences in 2016 so memorable.

I arrived to cover the “Asian-Americans in Hollywood & Entertainment” panel, hosted by Lapu, the Coyote that Cares Theatre Company. The organizers immediately sent me backstage to wait for the panelists to arrive.

It was my third story for the Daily Bruin. My first two articles had been about UCLA students and faculty, approachable people who I could theoretically run into on campus. For this article, I was going to be interviewing a series of successful alumni in the entertainment industry, including an actor from the Netflix series “Marco Polo” whose latest project was written and produced by James Cameron. I was terrified.

I interviewed some of the panelists – actor Leonard Wu, ABC Programming Manager Stan Pham and YouTuber Chris Dinh – and when they arrived, I began to relax. Each panelist was kind and approachable with their own insights about issues such as stereotypical characters and the importance of diversity on the creative level.

The standout moment of the night for me came when Dinh told me about how much he looked up to the character Short Round from “Indiana Jones and the Temple of Doom” and how it helped him realize the importance of representation in film. The story resonated with me and I knew immediately that I wanted to use it in the article.

After the article was published, I sent the panelists the link, thanking them for their time and for speaking on such an important issue as diversity in Hollywood. Some offered to chat with me further if I had any more questions or considered pursuing a career in the entertainment industry in the future. I was taken aback and humbled by the incredible generosity and support of the Asian-American entertainment community. It was inspiring to talk with people who are at the forefront of such an important issue.

I’ve been a Green Day fan since fourth grade, so when I got the chance to cover one of their concerts, some part of me died of happiness.

The original plan was to send a photographer and me to review the concert; however the Bruin was only granted one press pass so I would be on double duty that night. I got to the concert and waited around to find out where the reporters were supposed to meet. One of the concession stand workers spilled a beer on me but she gave me my Powerade for free to make up for it.

Eventually I followed the other photojournalists to the photo pit. Since I’m not normally a photographer, I don’t own a fancy camera and was going to have to make do with my phone along with a few other reporters. A few of the professionals in our group noticed that some of us were using our phones and growled at the social media reporters to “stay out of his way.”

When Green Day had finished “Bang Bang,” I got excited and threw my hand up and cheered, but the same photographer swatted my hand down and yelled, saying, “Don’t you ever do that again.” The ironic bit is that as we were being ushered out of the photo pit, he was jumping up and screaming “I love you Billie!” as he tried to push past the security guards. I guess no one told him to stay out of their way because they kicked him out of the photo pit without a problem.

Being in the photo pit was really exciting for the three songs I was allowed in for. It was a lot of scrambling and running back and forth to get the best angles.

For a while I was the closest person to Billie Joe Armstrong, which surpassed my childhood dream to see them in concert.

I never thought I would see “Top Gun” in theaters – after all, it premiered 10 years before I was born.

But there I was on a spring night in the Billy Wilder Theater as the opening credits rolled onto the screen. It’s a rare occasion when someone in the credits is also in the theater, but there was producer Jerry Bruckheimer.

It wasn’t until the lights finally came back up and Peter Blart from Deadline welcomed Bruckheimer onto the stage that I remembered what I came for. I began to take notes on what seemed to be a conspicuously staged Q&A between the two film industry veterans.

And I wasn’t the only one recording the conversation. A front row lined with aspiring actors hung onto the producer’s every word.

I found it difficult to play the part of reporter in the lavish theater. Actors, film industry professionals, press, students – for the duration of the event, we were all just kids at the movies.

I heard over and over how the first few months of college can lead to interesting situations, but I had no clue that sitting across edible insect farmers in a West Hollywood boutique wine bar would be one of those experiences.

I was writing my first article, fresh out of intern training. The story covered an edible insect and wine pairing event, so a photographer and I Ubered to the wine bar.

I had interviewed the hosts beforehand so I knew the premise of the event, but seeing the wine and the edible bugs next to each other in real life was a shock.

My favorite moment was interviewing one of the edible insect farmers. I had never interviewed on the spot before, so asking serious questions while silver platters of grasshoppers and delicate glasses of pinot noir were resting on the table between us was unlike anything I had done.

I ate insects – and I’m not sure I would have done so in any other situation.