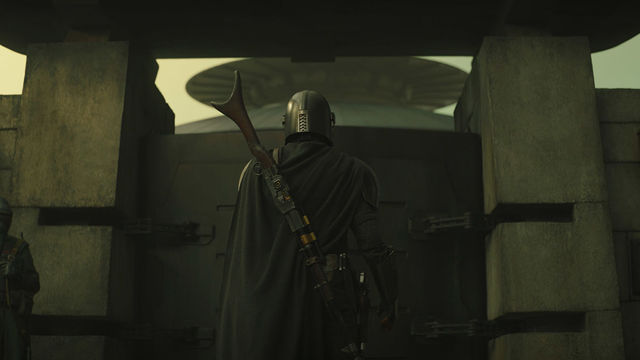 Correction: The original version of this headline incorrectly referred to episode 5 of "The Mandalorian" as "Chapter 13: Jedi." In fact, the episode was called "Chapter 13: The Jedi."

Ahsoka lives, The Child has a name and Thrawn is back in the series’ latest round of twists and turns.

After weeks of incremental story progression, the fifth episode of “The Mandalorian’s” second season plunges headfirst with perhaps the most significant reveals and character appearances thus far. “Chapter 13: The Jedi” rewards viewers with long-awaited pieces to the show’s puzzle, shedding light on characters both old and new in a visually masterful storyline.

The episode opens with the historic live-action debut of former Jedi Padawan Ahsoka Tano (Rosario Dawson), who is perhaps the most beloved character from the “Star Wars: The Clone Wars” animated television series. While fans have anxiously awaited Dawson’s interpretation of Ahsoka, the opening allays these concerns by nailing the visual essence of the character.

The show presents a more mature and world-weary Ahsoka, but Dawson’s uncanny resemblance, subtle smirks and vocal cadence help to evoke the familiar, kind-hearted spirit of the character. The episode’s writer-director and co-creator of Ahsoka, Dave Filoni, lovingly sprinkles other character-specific details like her musical motif and iconic battle pose, which further enhance the sense of continuity between the animated and live-action worlds.

On the barren forest planet of Corvus, Ahsoka prowls amid yellow fog, using both the Force and her signature dual white lightsabers to slash down guards of the city of Calodan. Thankfully, the Jedi’s cinematic presence doesn’t diminish the show’s hard-boiled edge, as Ahsoka is creatively portrayed like a horror movie monster from her adversaries’ perspective.

At the city gates, Ahsoka confronts Magistrate Morgan Elsbeth (Diana Lee Inosanto) who threatens to execute citizens if the Jedi does not surrender. Standing her ground, Ahsoka issues a one-day ultimatum for the whereabouts of the Magistrate’s unnamed master before retreating to the shadows.

Din Djarin (Pedro Pascal) searches for Ahsoka on Calodan, where he witnesses citizens being tortured within the confines of the overtly draconian society. The desolate streets sharply contrast against the Magistrate’s enclosed palace, which reveals a tranquil, Japanese-inspired courtyard. While the set design is perhaps a bit on-the-nose for a galaxy far far away, the deliberate aesthetic is later elevated by visual homages to the samurai films that influenced the original “Star Wars.”

The Magistrate provides Djarin with Ahsoka’s last-known coordinates and an offer to eliminate her in exchange for a priceless beskar spear. But after an unintended skirmish with Ahsoka in the woods, Djarin explains that Bo-Katan Kryze sent him for her potential insights on The Child.

Elegant camera blocking accompanies an ambient scene in which Ahsoka sits with The Child in meditative silence to decipher his past through the Force. Originally named Grogu, The Child was a Jedi Youngling trained in the Force for many years at the Jedi temple on the planet of Coruscant. However, he was hidden away by an unknown person during the rise of the Galactic Empire and has suppressed his powers for years to survive under their dominion.

Learning The Child was not only trained but also harbors emotional trauma hints at an intriguing sense of self-awareness beneath his wide-eyed exterior, deepening his character without unveiling his entire backstory for the time being.

Ahsoka attempts to train Grogu, but The Child only uses his powers once Djarin paternally encourages him. Upon seeing Grogu’s attachment to Djarin, Ahsoka refuses to train him further, claiming that such emotions can make even the best Jedi vulnerable to corruption – a weighty callback to her master Anakin Skywalker, who became Darth Vader.

However, Grogu’s character development is cut short as Ahsoka and Djarin join forces to take down the Magistrate and liberate Calodan. While the villain-of-the-week plotline is both predictable and formulaic, the artful mix of tableau shots – evoking classic samurai films like “Yojimbo” – elevate the action sequence with a sense of gravitas.

The highlight of the episode is Ahsoka’s duel with Elsbeth at the palace, which parallels Djarin’s concurrent face-off with the Magistrate’s lead enforcer Lang (Michael Biehn). The juxtaposition of a samurai-esque showdown against a Western standoff is a beautifully poetic distillation of the franchise’s cross-cultural influences. Embracing silence over musical flair, the scene is also genuinely intense as the visceral sounds of beskar against lightsaber realistically reverberate throughout the city.

After defeating Elsbeth, Ahsoka forces her to reveal the location of her master, Grand Admiral Thrawn. Despite the exciting name-drop, the reintroduction of a pre-existing antagonist feels premature given the minimal screentime of the series’ original villain, Moff Gideon, but it also suggests a backdoor pilot concealed beneath the episode’s side quest.

Ahsoka later gifts Djarin the magistrate’s beskar spear – a veritable Chekhov’s gun that will definitely see some action. Before Djarin departs, she advises him to visit an ancient Jedi temple on the planet of Tython, where Grogu may choose to call out for other Jedi through the Force. The story direction feels like a mild repeat of this episode’s premise, but The Child’s increasingly complex psychology raises the stakes.

Despite the episode’s predictable structure, “Chapter 13: The Jedi” rises above the formula as a visually sophisticated ode to the “Star Wars” mythos that heightens the storyline and instigates many a fan theory. Faithfully bringing Ahsoka to live action is a monumental achievement that makes the episode all the more emotionally gripping. And with virtually all trailer footage exhausted, the anticipation grows for what secrets lie ahead in the scaffolding of season two.

The Child is more fascinating than ever before – though pop culture will likely never shed Grogu of his Baby Yoda sobriquet.