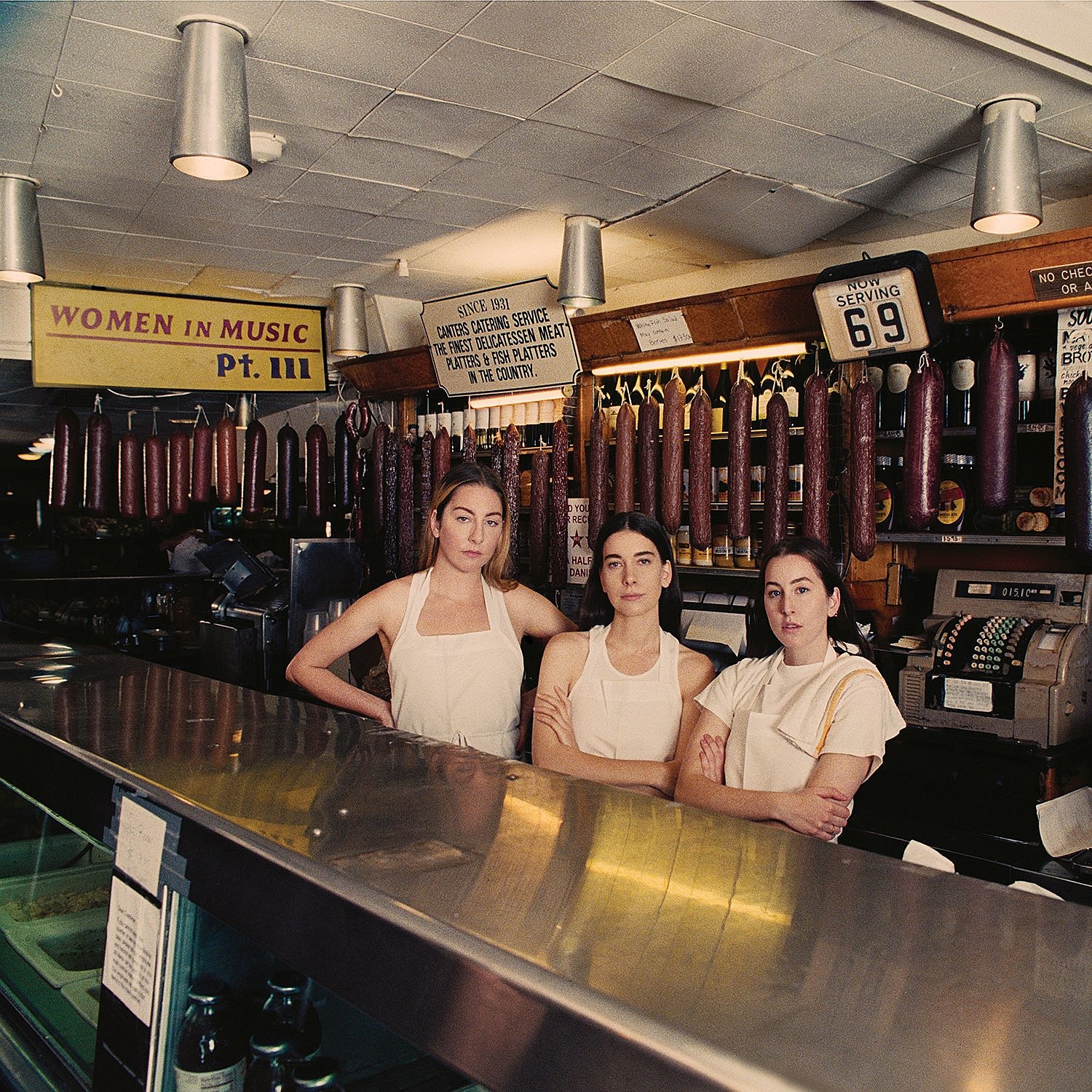 The Haim sisters are no strangers to bearing their deepest feelings to the backdrop of lush guitars, throbbing bass and rumbling drums.

But the evident maturation of their nostalgic ’70s pop-rock sound – along with some simply incredible vocal moments and reflective lyrics throughout – makes “Women in Music Pt. III” the band’s most confident and exciting effort yet. It’s the perfect soundtrack to uplift listeners from a potentially socially isolated summer.

The album cover, an image of the three sisters dressed in employee outfits in a deli surrounded by a hanging line of sausages, signals a satirical jab at how women in the entertainment industry have long been portrayed – a metaphor for their own experiences. But with its pointed lyrics, this record proves that the Haim sisters have progressed far beyond those oppressive, antiquated constraints.

A quick saxophone intro in the breezy “Los Angeles” opens the album as a sort of love letter to the sisters’ hometown, and the tone of its airy guitars matches the carefree vibe of a perfect sunny day in LA. Danielle, the band’s lead singer and guitarist, sings “New York is cold/ I tried the winter there once … nope!” reflecting her struggle to find a sense of home outside of her hometown.

An auditory deviation marks the third track, “I Know Alone,” as it explores a techno and synth-laden sound not typically found in past HAIM works. But the track’s brooding aesthetic paired with gloomy lyrics about the way one’s depression can amplify feelings of loneliness reveals a deeper sense of introspection from the sisters.

Moreover, the slow rock feeling of “Gasoline” serves as a fitting backdrop to lyrics about an increasingly toxic relationship and all of the peaks and valleys that come with it. High notes punctuate Danielle’s verses, while sisters Alana and Este harmonize with her on an infectiously calming and sweeping chorus. The metaphor of gasoline comes to symbolize a relationship that could go up in flames at any moment, since both parties are at such an impasse. The execution of concept along with tight lyrics and sonic cohesion make this track a standout in a record full of well-executed tracks.

Yet no other song touches more directly on the album’s theme of blatant sexism in the industry than “Man from the Magazine.” A stripped-back, “MTV Unplugged”-style recording of aggressive, grungy acoustic guitars and minimal bass notes accompanies Danielle’s snarky vocals about being sexualized and reduced by men, journalists and music store employees alike. It’s clear the sisters are tired of the age-old narrative that boys will be boys, and this track embodies the plight many female artists in the industry face to regain control of their voices.

The album’s final track, “FUBT” – a heavy reverb guitar ballad – pieces together a sense of nostalgia for ’90s slow grunge rock, echoing songs like Live’s “Lightning Crashes.” Danielle sings “Either way I’m gonna lose/ So I’m just gon’ keep on loving you,” touching upon the idea that perhaps the most difficult part of a toxic relationship is navigating the gray, in-between area where there’s an unsettling but defeatist sense of animosity for the partner. The track’s somber tone evokes a last-song-of-the-night-at-a-concert sensation that closes out an album of highs on a more reflective note.

Holistically, the Haim sisters have long been musicians that love to wear their influences on their sleeves, but never at the detriment of their harmonious talent. They’ve always been able to conjure up refreshing takes on sounds such as “Rumours”-era Fleetwood Mac or the Dixie Chicks and the Shania Twains of the late ’90s – all which ultimately become singularly HAIM.

And whether it’s the vocal inflections in the verses of “I’ve Been Down” calling back to “Jagged Little Pill”-era Alanis Morissette or the plucky acoustic guitar on “Leaning On You” that is evocative of the Fleetwood Mac classic “Never Going Back Again,” the record has its fair share of influences that pay homage while concurrently pushing the band’s own sound forward.

But the record ultimately traverses vastly new ground for the Haim sisters in pursuit of a diverse, flavorful musical aesthetic. At the same time, their evolution maintains a familiar sense of nostalgia for the retro pop-rock sound they’ve been so deeply attached to. Lyrics of intense loneliness, relationship impasses and sexism in the industry round out some the band’s best songwriting yet.

A collaborative, familial effort from start to finish, “Women in Music Pt. III” proves that the Haim sisters have taken the next steps in their careers – and that sheer talent should be all you need to get by in the entertainment industry.