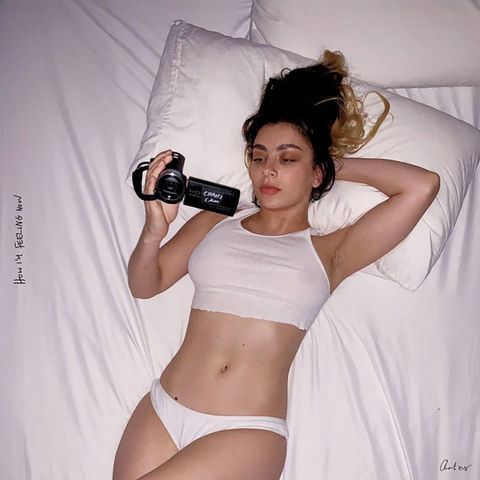 The Charli XCX brand promises rave music molded into studio pop, and her latest record’s lyrical study of raw emotion lives up to such lofty expectations.

The sharp, short and lyrically stark album, “how i’m feeling now,” was produced as an affecting response to COVID-19 and the subsequent quarantine period. Charli took to Twitter in early April, asking fans to participate in the creative decision-making process – track names, cover art and running time – behind her next album, which the singer started and finished while much of the world was ordered to stay at home.

“how i’m feeling now” presents a poignant, electronic portrait of a star stuck in her own head and attempting to relate to an inaccessible outside world. The LP is loaded with sparkling sound but never useless noise, making it the quintessential quarantine creation – a structurally solid and thematically thorough album grasping at connection while in isolation.

The listening experience begins with a bang. The shocking sonic language of “pink diamond” brilliantly fades from aggressive bass drum grinds and strobing synths into blown-out backup vocals. As she sings “I just wanna go real hard,” and “I got a big heart/ On the video chat,” the singer tactfully introduces her intent for the rest of the album: lyrical intensity mixed with sonic lightness as a way to connect with listeners during uncertain times.

The fourth track “7 Years” solidifies the singer’s contrast of bright sound and complex emotional investigation. Rhythmic crashing drums crowd a soundscape already full of bubbly synths while Charli sings “So hard, things that we’ve been through, yeah/ Could’ve fallen, but we only grew.” While it’s unclear who she’s speaking to – an enigmatic love interest or the fans with whom she worked to create music – the ambiguity works in favor of the album attempting to cover a lot of emotional ground.

The introspective examination of wrought feelings continues as instrumentals fade into “detonate,” a clear sonic standout on the album with effervescent and dynamic percussion that masterfully constructs a story. Full of muffled, futuristic beeps and high-pitched staccato piano keys, the track tells a love story, which speeds up from a breathy and moody lyrical declaration of dominance into its final form as an concession of insecurity. Charli’s mid-point shift from impenetrable to vulnerable in the track makes it fit like the final piece of a puzzle into the record’s larger narrative of how the singer is feeling now – lovesick and confused.

Compared to the consistent novelty in the album’s opening, its second half drones slightly, coming close to simply repeating musical motifs – mechanical screeches, bubbly synths and descending crashes – rather than reprising them. In particular, “enemy,” “i finally understand” and “c2.0” meld together in the album’s center, ultimately feeling like the same 30-second riff stuck on loop. Where all the previous tracks hold tight to the notion that synthetic roars and shrieks are an appropriate response to the current events, the repeated sonic overload in the second half of the album sets the theme adrift.

As quickly as it’s lost, the final three songs of the album find again the emotional intent of connection while separated, finishing off in an ode to early 2000s nostalgia with notes of her trademark dance-pop music.

“party 4 u,” another standout among the songs, is the single that is the most lyrically heavy and sonically pared-back Charli has been in recent years. Her undeniably strong grasp of millennial melancholy shines with lyrics like “Called your digits, but the phone kept ringin'” that aptly recognize the distress of finding love in a technologically advanced world. A shift from the clean, single-track vocals to a layered chorus also brings listeners on a five-minute journey through the stir-crazy mind of a lovelorn and daydreaming pop star.

As if to bookend an abrupt listening experience, “how i’m feeling now” screeches to a stop after a short 37 minutes. Despite some momentary sonic confusion with repetition of musical tropes and sensory overload, the album is an overall successful attempt to create an escape from current events, while simultaneously diving headfirst into them.

With what is both an interstellar odyssey and a vulnerable love letter, Charli has returned to her rave roots while remaining topical with the mechanical but bright journey of “how im feeling now.”