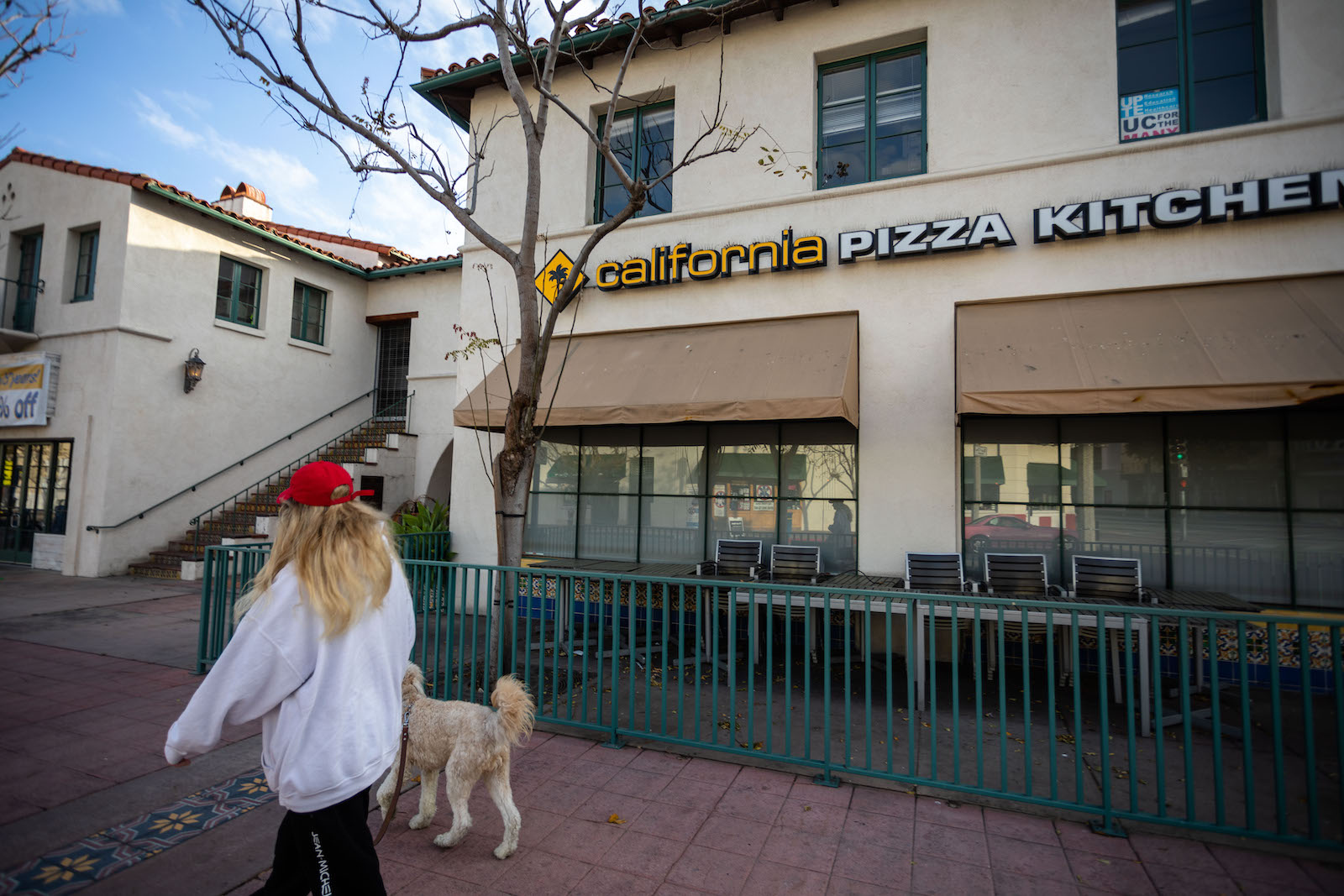 Sequential government orders have limited restaurants and bars in Westwood Village to takeout and delivery options. The economic toll of the limits and the coronavirus pandemic has even forced some to close and has left others on the edge. (Jintak Han/Daily Bruin senior staff)

John Sungkamee’s Westwood restaurant Emporium Thai was on the cusp of its 20-year anniversary when Los Angeles restaurants were ordered to switch to delivery and takeout only.

“We were supposed to be celebrating but we had to close on that very same day that I opened 20 years ago,” Sungkamee said. “It was like 50% of my revenue was gone. Now, even though we are doing well with the delivery and takeout, it’s just enough to get by.”

Small businesses throughout Westwood and the rest of Los Angeles are struggling because of reduced patronage during the coronavirus pandemic.

Los Angeles Mayor Eric Garcetti initially ordered the closure of bars, dine-in restaurants and nightclubs across the city March 15. California Gov. Gavin Newsom issued a safer-at-home order statewide shortly after, on March 19, in an effort to slow the spread of the novel coronavirus. On April 10, these orders were extended until May 15 in Los Angeles County.

Since the start of the safer-at-home orders, businesses have either closed their doors or adapted to takeout, delivery, and curbside pickup.

Rocco’s Tavern and Barney’s Beanery in Westwood Village have temporarily closed until the order is lifted. Some businesses, such as Sur La Table, have not only shut down but have boarded up their storefronts.

With the recent closure of Stan’s Donuts, which has been a staple in Westwood for 55 years, concern for small businesses is especially high.

Watching the news, Sungkamee saw that COVID-19 was not only affecting his business but the entire community.

“I really feel inspired that the COVID-19 first responders are working so hard,” Sungkamee said. “They work double shifts, most of them work more than 60 or 70 hours a week. These people are my customers.”

In response, Sungkamee created the program Feed the Heroes where people can donate meals to UCLA hospital workers to be personally delivered by him. The program has already donated more than 400 meals since its launch earlier this month and garnered support from celebrities like Jennifer Love Hewitt.

“The responses that I get from the nurses and the doctors is wonderful. This is the thing that gives them strength,” Sungkamee said. “It’s a small thing, but it’s making an impact. Not only do we give back to the community but I also feel like my business is staying afloat. I want to fight this with them.”

Freddy Papen, a third-generation co-owner of his family’s ice cream business, Saffron & Rose, said his business is also struggling during the pandemic. During these uncertain times, he is trying to do his best for both his employees and his business, he added.

Rather than fire his workers, Papen said he spoke to them individually and allowed them to opt out of work for their safety.

“Everyone was given the opportunity to stay at home, not come to work, but have the job security to know that when they come back, that their position with our company is still safe,” Papen said, “But that’s difficult – to try to run a business when half of your staff has basically disappeared.”

Papen said his business was somewhat prepared for difficult situations but never expected a problem as bad as this.

Although Saffron & Rose has been cautiously saving for the unexpected, the business is still only scraping by during the pandemic.

“Right now we’re making just enough to pay our bills, pay our rent, pay our employees and get through,” Papen said. “The company itself isn’t making any money, but we are able to pay our overhead to make sure the doors stay open.”

Despite the challenges, Papen is still hopeful Saffron & Rose will survive.

“Business is very unexpected. Everything can change from one day to the next, but as long as we’re staying true to what we do and keeping our product good we’ll be OK,” he said.

Headlines, a diner and grill that relocated within the Village in July, has also remained open for takeout and delivery amid widespread business closures.

Erick Mendez, a Headlines co-owner, has worked at his diner for more than 10 years. He said he is worried for the diner and other local businesses.

“Those things (COVID-19), they just kill the business,” Mendez said. “We are just trying to do our best to pay the rent and we have not even made that.”

Though the situation is tenuous, Mendez said he still felt supported by his community and the people still coming into the diner.

“We get people from the hospital or people working around the Wilshire area,” Mendez said. “Some customers will just come to support us and buy something from the restaurant.”

The move to online classes at UCLA prompted many students to leave the Village. Some of those who have remained are witnessing the toll the stay-at-home order is having on small businesses and choose to support them by occasionally ordering takeout.

Jemma Tan, a fourth-year English and political science student, chose to reside in her Westwood apartment. The current situation isn’t the first time small businesses have seemed to struggle, she said.

“In Westwood the rental cost is so high already that even without all of this, it’s hard for small businesses to sustain themselves,” Tan said. “We have had so many little pop-ups come and go.”

Small businesses such as Sepi’s, which closed down in 2019, struggled to remain in the Village long before COVID-19 limited their business amid all the coronavirus-related closures.

Isabella Bustanoby, a second-year fine arts and physics student, also chose to remain in her university apartment. She added that she has been ordering more takeout in the past few weeks than she normally would.

“It is important to support the businesses in your local area, especially for student stores and nonchain operations because they are the most at risk for losing a lot of business,” Bustanoby said.

Growing up in Los Angeles, Bustanoby has seen many of her favorite businesses struggle to get by. She said she laments the ripple effects the current economic conditions will have on the community.

For Mendez, the reduced amount of business has not been enough to support the restaurant.

“If this thing continues, maybe business will go out, and I have no idea what I would do,” Mendez said. “It’s not only me that would lose my job. I’ve never seen anything like what’s happening right now.”