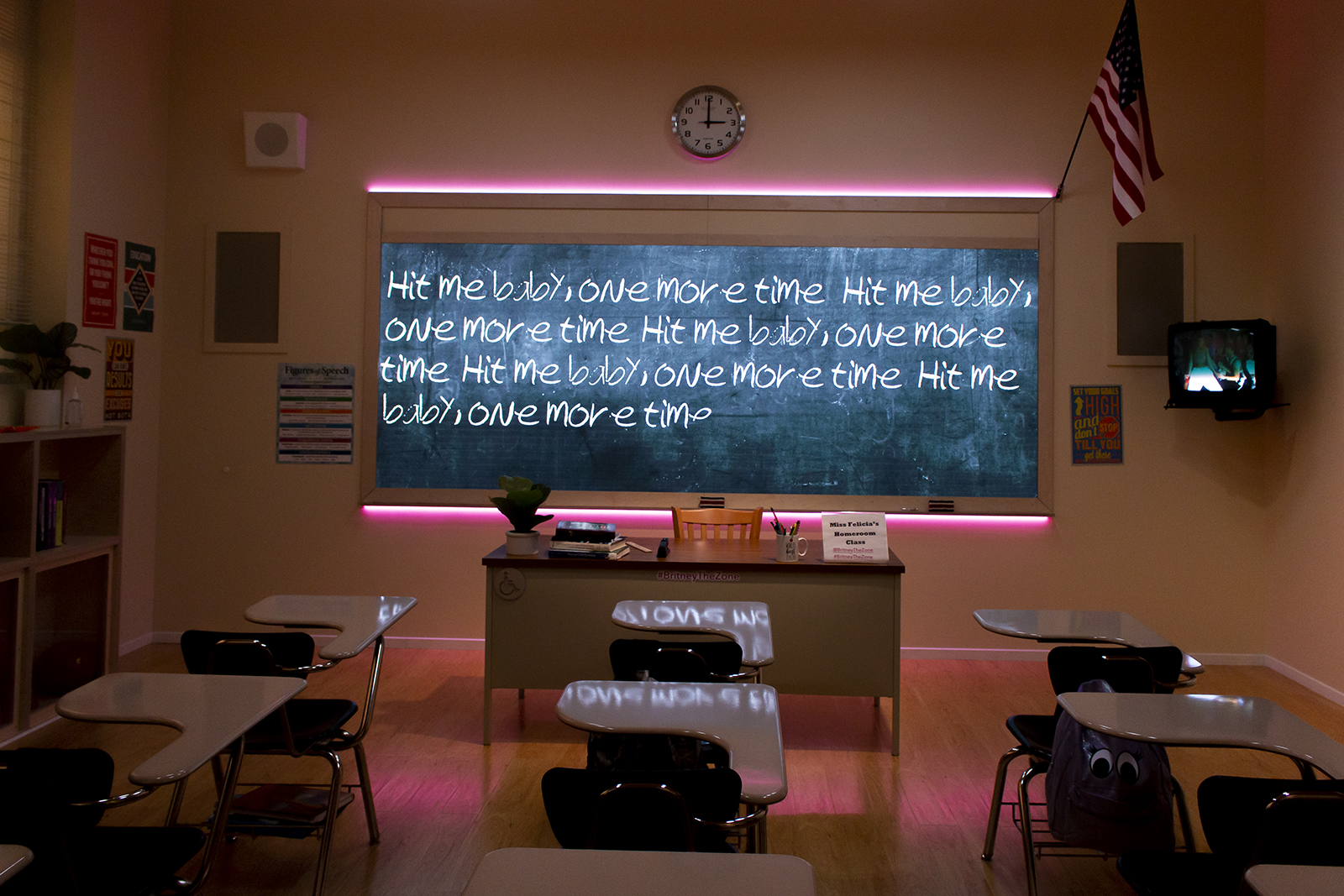 The Britney Spears-inspired pop-up The Zone leads visitors through a tour of the pop singer’s most iconic moments, such as her “…Baby One More Time” music video. (Christine Kao/Daily Bruin)

Opening its doors across the street from The Grove through April 26, The Zone invites customers to step into a tour of rooms inspired by the singer’s most legendary music videos and performances. The fan-created experience received Spears’ blessing and a handful of her costumes, but not her guidance – and it shows.

As an Instagram trap for those who want to snap photos in Britney-esque sets, The Zone gets the job done and then some. The experience begins before visitors even set foot through the door, as the building’s hot pink, mural-covered exterior signals the entrance to a separate, elusive realm. Once inside, a starkly white, gleaming lobby is decorated with Spears’ donated costumes – like her memorable “Toxic” stewardess dress – interspersed between merchandise kiosks.

This holy grail of exclusive, expectedly overpriced Spears paraphernalia is captivating enough to be distracting while employees set up each customer’s The Zone account. The tour includes predesignated photo and boomerang moments, which are conveniently uploaded and organized to The Zone app.

The Zone’s tour travels through nine rooms, six curated Instagram moments and a sassy telephone that softly moans “It’s Britney, B****” when answered. The journey begins in a classroom decorated with inspirational posters and baby pink lighting based on Spears’ first music video, “…Baby One More Time.” Following a mock-informational video in which the teacher from the original music video shares The Zone’s rules and expectations, a bell signifies the end of class.

This strut through school continues into a hallway lined with interactive lockers, leading to a gym where fans can write letters to Spears – some of which have been featured on her Instagram. The creators’ deep level of planning is evident through championship banners representing Spears’ career achievements. A scoreboard displaying 38-2 – as a nod to the singer’s age and kids – seamlessly transports visitors into a world dominated by Spears Easter eggs and aesthetics.

The high level of production and attention to detail is present in most of the rooms. Unforgettable Spears moments, including the “Circus” and “Toxic” music videos and her always relevant MTV Video Music Awards “I’m A Slave 4 U” performance, rightfully garner the most lavish sets of the pop-up. The iconic mile-high club depicted in “Toxic” is reimagined as a neon pink airplane interior, embellished with “Toxic” barf bags, safety sheets starring Spears and blue stewardess hats.

Spears brought jungle vibes to her 2001 “I’m A Slave 4 U” performance, and the same atmosphere is mirrored in The Zone. An omnipresent snake weaves through the thickets of greenery, while ominous lighting and waterfalls thicken the mood. The ultimate cherry on top is a boomerang moment in which caged visitors drape a stuffed snake over themselves.

However, The Zone creators certainly did not save the best for last, as the room based on “Circus” was a middle stop on the tour. As the largest room of all, it features an oversized ball pit perfect for playful TikToks. Its red interior and fair attractions, including ring toss, provide the feel of a big tent carnival. Its immense size and whimsical ornamentation envelop the senses in flirtatious and Spears-filled fun.

The sparks felt in the “Circus” room, unfortunately, did not make it to the rooms for Spears’ song “Stronger” and her “Blackout” album, as the minimalist production value left much to be desired. Instead of recreating the futuristic party scene from “Stronger,” creators pursued the other half of the music video in which Spears dances with a chair in a black room. While it is sexy when Spears does it, this simple concept does not offer much interaction or feasting for the eyes like other rooms.

The “Blackout” room represents Spears’ fifth studio album and conveys the cult following of this record through a sanctuary setup. The handful of cheeky details, including a confessional that lights up as you kneel and LED candles that extinguish when blown, fail to make up for the formulaic design. Rooms based on “Me Against The Music” and “Oops!…I Did it Again” have noteworthy Instagram moments, but their moderate execution is nothing to write home about.

[Related: Pop-up review: WonderWorld’s display of whimsy lives up to world down the rabbit hole]

Instagram and Twitter feeds are sure to gush at the curated content moments, but that’s where The Zone’s innovation stops. Most pop-ups, like the Museum of Ice Cream, center around a concept that does not easily provoke contemplation. But Britney Spears’ career and personal life offer endless opportunities that The Zone shies away from. A room dedicated to Spears’ relationship with Justin Timberlake or a photo gallery of articles detailing her 2007 meltdown would have evoked the drama missing from the tour.

The addition of rooms investigating Spears’ biggest headlines through her personal commentary or interviews could offer a deeper look into Spears as a person, not as a pop star. The Zone misses out on providing an uncommon experience in which guests leave with a new perspective on the subject alongside cute content for their social feed.