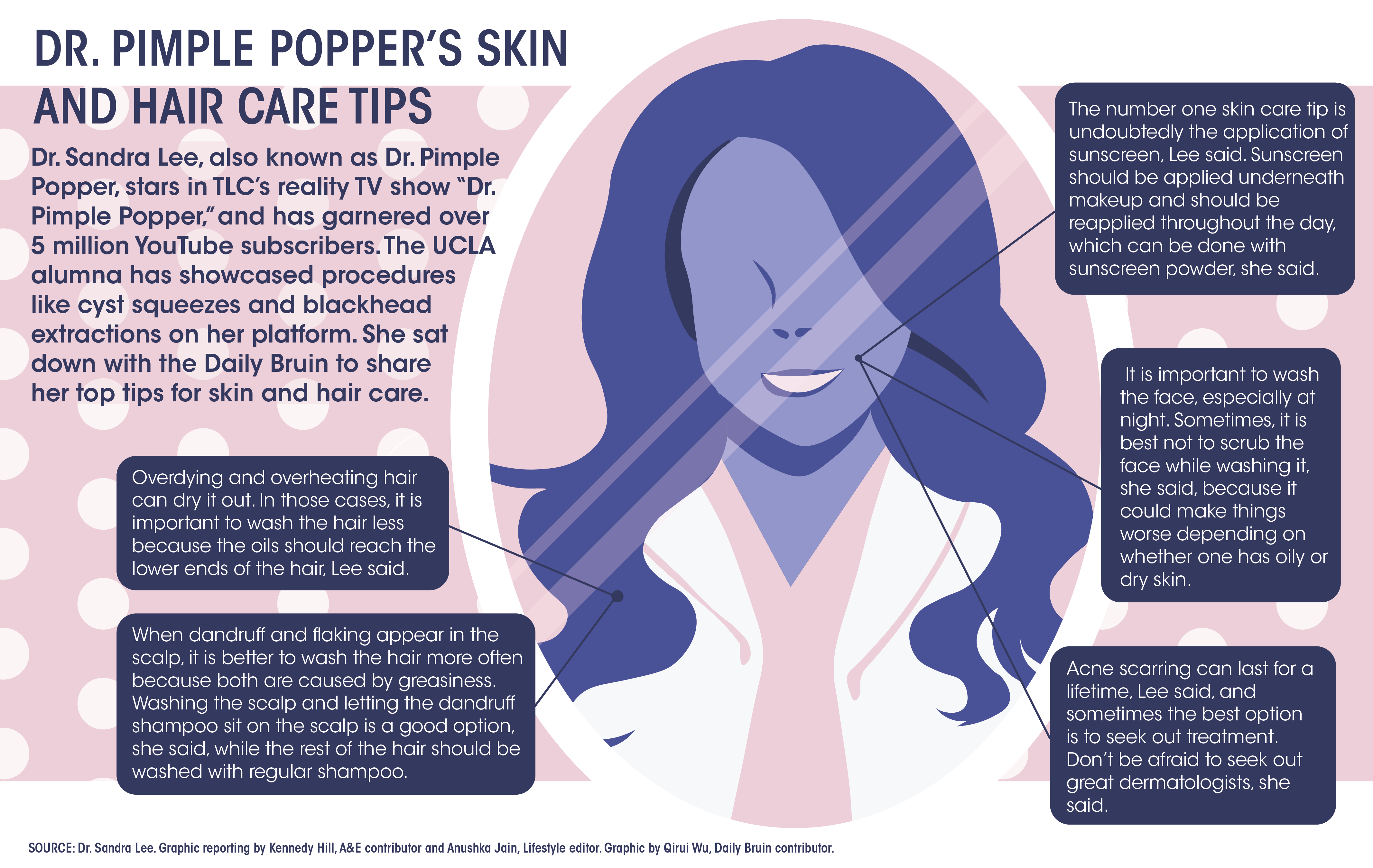 Pimples and blackheads and cysts hard as seeds – these are a few of a popaholic’s favorite things.

“Popaholic” is the term ascribed to the fans of Dr. Sandra Lee, a UCLA alumna who has garnered over 10 million followers across her social media platforms by posting videos of her minor dermatologic operations. Although Lee has been a dermatologist for 15 years, she did not begin posting videos of her procedures on Instagram until 2015. Four years later, Lee – more popularly known as Dr. Pimple Popper – now has a skin care line, a skin care book and a TLC reality TV show.

“For some reason, when I posted a blackhead extraction early on, it got a noticeable increase in attention,” Lee said. “I quickly realized that there was this subculture, (or) population of people on the internet that shared popping videos with each other.”

Since Lee had always considered dermatology to be a visually interesting field, she said she imagined her posts being shared with makeup and travel videos. Now that her clips reach millions of viewers, Lee said her unexpected exposure has heavily impacted her lifestyle. Dermatology is a profession that is highly sought after by prospective physicians because it is less stressful and demanding than most other specializations, she said. But now that she has become a YouTuber and TV personality alongside her career as a full-time physician, Lee said she is sometimes easily overwhelmed while juggling her jobs.

Lee’s place in the medical community has also changed alongside her image in the public eye. While she initially feared other dermatologists would view her cheeky screen name and videos as an exploitation of their profession, Lee said many have come to respect her work and are impressed by the attention she has brought to the field. Although Lee is not at the forefront of her specialty, she said her popularity has inadvertently turned her into a representative for the field.

“I feel a lot of pressure … because I know I’m not the front of dermatologists. I’m not the most talented,” Lee said. “But I feel like I represent them, and I definitely don’t want to make anyone think negatively upon dermatology because it is a great specialty.”

Catering to over 5 million subscribers, Lee’s YouTube channel features lipoma and blackhead extractions, as well as other minor operations. Lee is most known for her blackhead removals in which she uses a comedone extractor to push up and scrape out sebum – an oily substance naturally secreted from the skin – from clogged pores. In her lipoma extractions, Lee pops out benign, fatty growths that sometimes grow to be larger than grapefruits.

Sonja Kobayashi, a second-year psychobiology student, said Lee inspired her to pursue a career in dermatology. As the daughter of a surgeon, Kobayashi said she was used to the unpleasant side of medicine and soon became drawn to pimple-popping videos. As opposed to using dermatology as a means for publicity, Kobayashi said she believes Lee makes videos to spread awareness and knowledge concerning skin health.

“People do get weirded out by anything like pimples or anything dermatological,” Kobayashi said. “But (Lee) makes it normal, and she’s kind of the first one to break into this field of not publicizing medicine, but making it more accessible for everyone else to see.”

While the clients featured on Lee’s YouTube channel remain anonymous, her show manages to include the patients’ perspectives, she said. Each episode of her TV show includes three or more procedures, adding backstory for each patient to show how their skin has affected their lives. A season one episode of “Dr. Pimple Popper” featured the treatment of a 63-year-old woman suffering from neurofibromatosis – a genetic condition in which tumors develop around nerve cells and form bumps on the skin. The patient said her appearance greatly diminished her confidence and garnered stares from others when she was outside her home. After undergoing treatment to help smooth the skin on her face, the patient said Lee had restored the self-esteem she had lost.

Dermatology is about more than pimple popping, Lee said, and her show demonstrates how her minor procedures can be impactful.

“It’s a reality show, but it’s not a show about throwing tables or fighting,” Lee said. “It’s actually about changing people’s lives in a better way, so I feel really proud to be a part of something like that.”