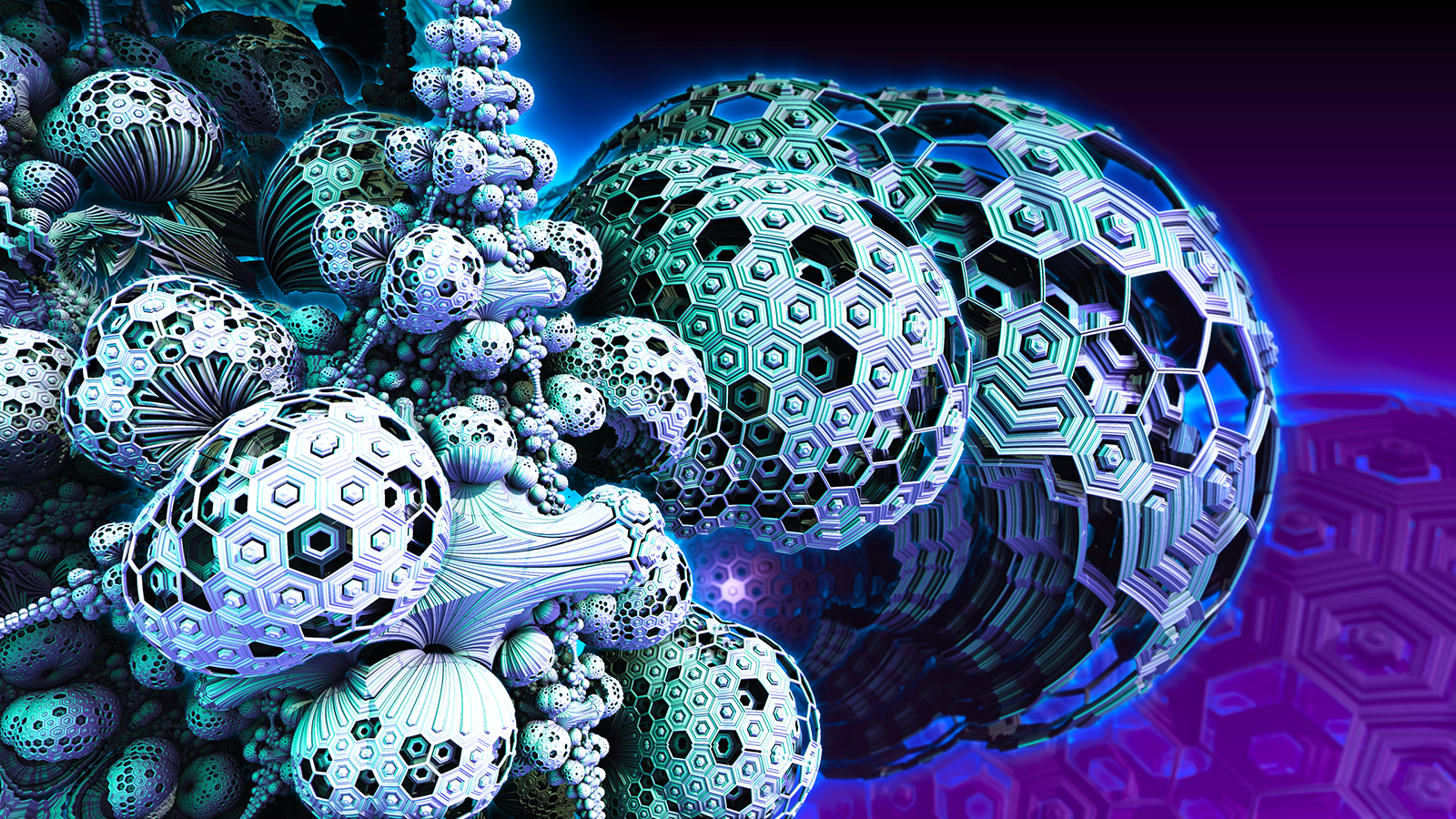 This true 3D fractal was created with Mandelbulb 3D software. Fractals – figures in which smaller parts exist at various scales within a larger piece – are closely related to geometric artworks that show self-similarity, like mandalas. (Courtesy of Keith Anderson/Fractaled Visions)

Believe it or not, Disney’s animated characters live in a world that is fairly consistent with our own.

Animation’s splendid adherence to reality is only one result of the prolific creative fusion of math and art. And yet, the disciplines are often thought to achieve strictly separate ends. Math is considered to logically and rationally deal with reality; meanwhile art veers towards the imaginary and irrational realms. But when the disciplines merge, they create unmatched mental and optical effects cherished within contemporary culture. My discussions with graduate students and a researcher in UCLA’s mathematics department further revealed ways the union of math and art can yield visually pleasing constructions.

Movie magic is often made possible by the collaboration of mathematicians and artists. Stephanie Wang, a graduate student of mathematics, applied her skills to animation during her summer internship at The Walt Disney Company. A specialist in computer graphics, Wang worked on tasks involving aspects of simulation. To conduct accurate simulations, mathematicians solve equations and collect data about physical phenomena – water, fire, smoke, snow – to map out realistic interactions between a character and, say, an avalanche.

Picture the scene from “The Little Mermaid” during which Ariel sings “Part of Your World.” As she sits atop the rock, a massive spray of ocean water crashes against it for extra drama. Besides being cinematically intriguing, Wang said extensive physical animation underlies this visual. Mathematicians would have solved an equation to pinpoint each liquid particle’s realistic position in space as it interacted with the rock. Simulation forms the foundation for creating convincing scenes or enhancing whimsical ones, she said. At Disney, Wang collaborated closely with visual effects artists to achieve a scene’s desired vision or mood.

“I would talk to some of the visual effects artists and listen to their feedback to see if the technology I developed will be of good use when they are trying to create the artsy scene they want in the movie,” Wang said.

While the disciplines come together for filmmaking, they can produce equally intriguing visuals for still-image artworks. Optical illusions owe their very existence to the artistic illustration of mathematical concepts. Mathematics graduate student Riley Thornton recently delivered a talk entitled “Applications of Geometry to Art Criticism,” in which he focused primarily on the “impossible constructions” of a 20th-century Dutch graphic artist M.C. Escher. Through geometric artworks and illusions, Escher toyed with reflection and perspective.

One such artwork from 1960, “Ascending and Descending,” depicts a hollow square tower roofed by a staircase that both rises and drops at the same time depending on where the eye shifts. According to Thornton, Escher’s work invokes the mathematical concept of cohomology, which is used to patch local data into a global picture. While local portions of the image, like any single corner of the staircase, make sense on their own, all comprehension crumbles after stepping back to take in the whole image.

“If you focus on any single corner of the staircase, you can picture that corner in three-dimensional space, but you can’t do that to the whole picture because the staircase weirdly meets up and wraps around on itself,” Thornton said.

For the artist to achieve his visual effects, Thornton said Escher must not only have possessed a remarkable visual intuition, but corresponded frequently with mathematicians of his time. Escher sent drawings and wrote letters to the likes of Roger Penrose and Harold Coxeter, seeking feedback about how to better generalize the concepts he was illustrating, or render them more easily.

But Escher’s math-informed compositions did not receive a warm welcome from the artists of his time. Critiques commonly held that his rule-governed art lacked soul. While Escher wrote letters to mathematicians, his contemporaries explored pop art and abstract expressionism – movements concerned with the symbolism of forms. Nowadays, the general public tends to praise Escher’s artwork for its ability to render rigorous abstract concepts in a neat, visual format.

Apart from direct interaction between artists and mathematicians, the fields can also play with similar concepts, such as fractal geometry and repeating patterns. Annina Iseli, a postdoctoral researcher, said she noticed that fractals – figures in which smaller parts exist at various scales within a larger piece – are closely related to geometric artworks that show self-similarity. Mandalas, which are geometric Hindu and Buddhist spiritual charts representing cosmic structure, are a form of art that exhibits similar self-repeating patterns.

“In some sense, a lot of art is fractal because it’s playing with the idea of (showing) the same picture repeatedly on small and big scales,” Iseli said. “This idea of seeing the same picture on different scales is the foundation for fractal geometry.”

Contemporary artist Robert Silvers also activates the fractal principle in his photomontage technique. To make an image of the “Mona Lisa,” for instance, Silvers pieces together thousands of miniature pixels of other historic paintings of women to make up the whole.

Whether it be fractal or animated, by Disney or Escher, collaboration between math and art is equally capable of mimicking nature as it is of defying it. Thanks to the junction of the visual with the conceptual, creations like optical illusions, animations and self-repeating patterns never fail to pique curiosity and stimulate the senses.