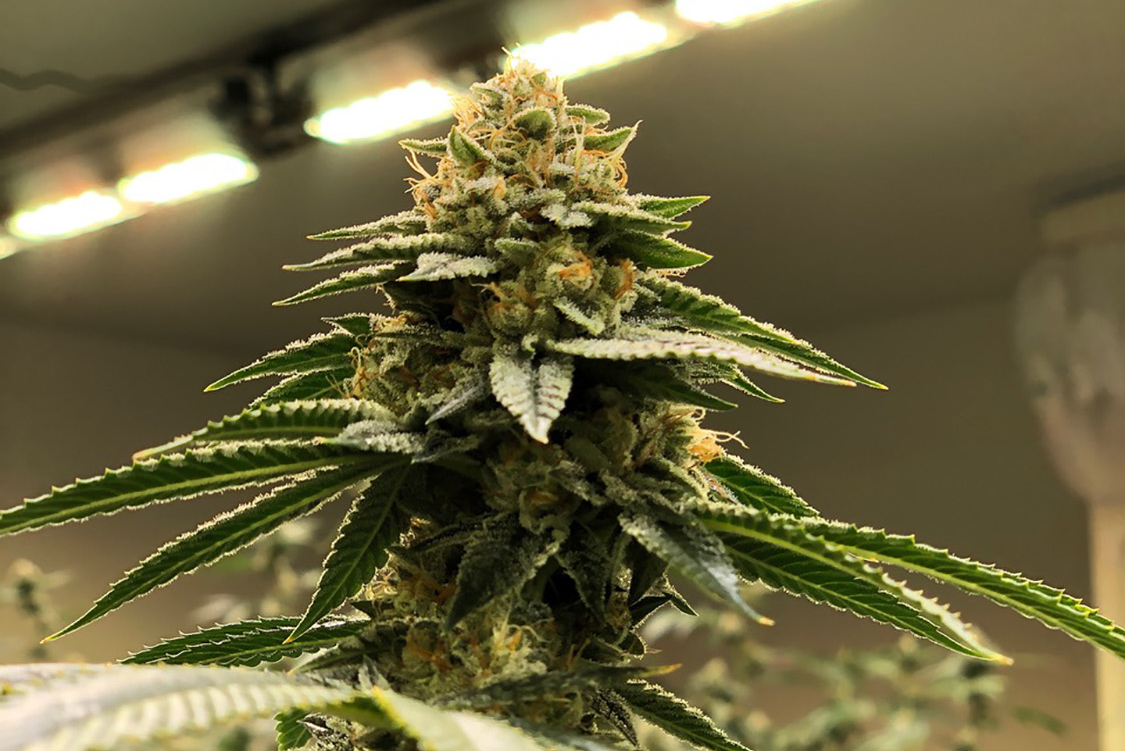 Agnetix is a company that engineers indoor, water-cooled LED lights utilized in indoor growing operations and presented at cannabis networking events. Strong lighting is one of the essential aspects in creating quality cannabis plants, as well as ideal ratios of water and nutrients. (Courtesy of Cristina Rodrigues)

Most people who visited my room wouldn’t have noticed the small cardboard box in the corner. I had just moved away to college and decided to grow pot in my shared room – don’t worry, it was legal and not prohibited by the cooperative dorm I live in off-campus.

My roommates didn’t mind this project, but would likely have been more enthusiastic if it produced a quality smoke. Instead, my first plant, sustained by a small fluorescent lightbulb, looked lanky, smelled like grass and tasted like chemicals.

There is a key difference between my poor attempt at cultivation and a plant that produces top-shelf cannabis buds: technology. The most advanced cultivation operations today use plant strains bred to perfection, provide an ideal ratio of water, lights and nutrients, and are often housed indoors in a climate-controlled environment.

This week I spoke with Agnetix, a company that engineers water-cooled LED lights utilized at indoor grows such as The Cure Company’s growing facility, and was featured at a cannabis networking event I attended recently. Strong lighting is one of many essential aspects in cultivating quality marijuana, and in a market as competitive as California’s, growers must provide the most meticulously grown products to succeed.

In any indoor agriculture operation, growers use water and electricity to produce quality cannabis. The sheer amount of resources needed to grow cannabis became clear to me when I visited The Cure Company’s 30,000-square-foot growing facility. I observed innumerable barrels of nutrients, pipes, hoses and wires.

Aside from lights, indoor cultivation businesses can use automatic watering and fertilization systems, dehumidifiers, fans and other hardware to physically house the plants. The Cure Company housed the highest level of technology – no pun intended. A few of the other cannabis businesses I have visited also mentioned that outfitting their factory with the necessary power supply has been one of the most costly and essential aspects of their growth.

Lighting contributes to cultivation costs in a few ways, said Troy Robson, the business development manager at Agnetix. Lights need electricity to operate and create heat, which in turn creates the need for an air conditioning system to keep the environment from overheating. Robson said an ideal light should shine as bright as possible while using minimal electricity and wasting the least amount of heat energy.

Robson said LEDs make up only about 20 percent of indoor agriculture light arrays and claims that in the next five years, as LED technology improves and closes the gap with traditional lighting, Agnetix is positioned to become a hundred-million-dollar company.

When I saw a demonstration of their A3 light in December at the Southern California Cannabis Business Investment Group meetup, a cannabis networking night, Agnetix had attendees touch the blinding surface of the light array and see that it wasn’t warm. Every time the light switched, my reaction was a combination of interest in the technology and annoyance that the incredibly strong LEDs were flooding my face with light.

After seeing grow lights up close and at a cultivation facility, Agnetix was interesting to learn about for one main reason – it is just one of the massive group of businesses involved in cannabis that aren’t directly involved in the seed-to-sale supply chain. When you hear people speculating about the massive future of cannabis, they aren’t only talking about the transactions that happen at a dispensary – they are talking about the industry beyond the plant itself.

When I asked Robson if Agnetix’s technology is available for home growers, he said no. Until then, or until I learn a little more about botany, I’ll stick to buying weed.