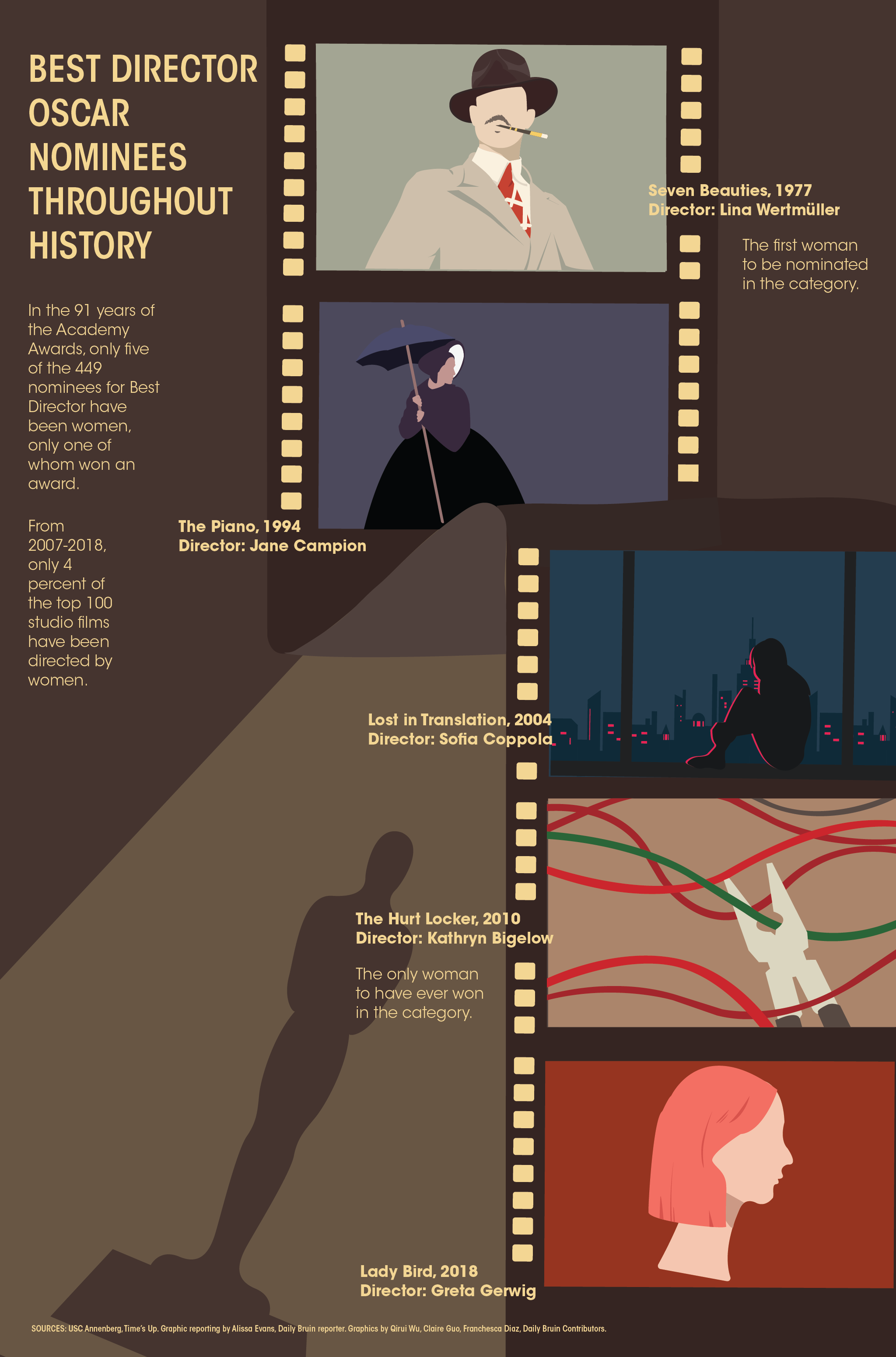 The number of female best director nominees throughout the 90-year history of the Oscars can be counted on one hand.

Since the first Oscars ceremony in 1929, the Academy has nominated 449 filmmakers in the best director category, only five of whom have been women. But despite their lack of representation at the Oscars, female directors continue to demonstrate their ability to produce high-quality films year after year. Lynne Ramsay, who helmed one of 2018’s best films “You Were Never Really Here,” not only deserved a best director nomination, she deserved a win. Marielle Heller’s “Can You Ever Forgive Me?” and Debra Granik’s “Leave No Trace” also displayed a mastery of directing equal to that of any of this year’s nominees.

In the past few years, social movements have challenged the industry’s male dominance. After a recent statistical report underscored the deficit of female-directed films, Time’s Up announced the 4% Challenge, which presses people to work with at least one female director in the next 18 months. Nithya Raman, the executive director of Time’s Up, said the challenge encourages people to work with seemingly nontraditional directors while providing a platform to highlight their efforts.

“The fact that only 4 percent of 1,200 studio films over the last decade were directed by women … tells a very clear story of bias, discrimination and oppression,” Raman said. “Both (safety and equity) are functions of the incredible power imbalances that exist in this industry and a movement has to address both of those in order for things to really change going forward.”

The countless women who have shared their stories of abuse perpetrated by male coworkers and bosses are also catalyzing a power shift in Hollywood. Movements like Time’s Up are finally laying the foundation for equality, but workplace abuse has often prevented women from climbing the corporate ladder.

This misogyny is perpetuated by the fact that men are the principal gatekeepers in Hollywood, which makes it easier for them to establish themselves in the industry. Nancy Richardson, a professional film editor and professor in the School of Theater, Film and Television, said it is commonplace for a cheap, mediocre film to launch a white male’s career. Based on her observations in the industry, Richardson said men are continually offered large films to direct, while women work tirelessly to prove themselves capable of directing a single studio film.

“There’s more mistrust with women,” Richardson said. “We just have not had enough female role models to know what ‘the woman in charge’ is supposed to look like or sound like or act like.”

Richardson also explained that the Academy as a microcosm of the film industry lacks diversity. Consequently, women are underrepresented in the best director category – as of 2018, the Academy was 87 percent white and 72 percent male.

Becky Smith, a professional director and professor in the School of Theater, Film and Television, said inducting more women and minorities into the Academy would help eliminate the self-selective bias which prevents inclusivity across categories. Diversity in the Academy is a necessity, but the fact that a film was directed by a woman would not likely deter men in the Academy from voting for it. Rather, the issue primarily stems from the sheer lack of working female directors in Hollywood, and the disproportionate number of male-centric films that get made each year.

“What women write, what women experience and what women are interested in … I just don’t think it’s respected as much. It’s just not as valid,” Smith said. “The only woman to finally win in directing had to be for a man’s war film because that was palatable.”

That woman was Kathryn Bigelow, who won for “The Hurt Locker” in 2010. And while many cite the victory as a turning point for women in film, Smith said her win reflected the Academy’s bias toward masculinity in films; “The Hurt Locker” is a typical “man’s movie” – an Iraqi war film complete with a myriad of bomb detonations and a nearly all-male cast, led by Jeremy Renner. In order for a woman to receive Oscar recognition, she must produce the kind of film that men enjoy.

The truth is that the female perspective is not considered as valuable as the male perspective. While women account for 50 percent of moviegoers, only 28 percent of films from 2007 to 2018 were led or co-led by female protagonists. The Academy has recognized female-centered, female-directed films like “Lady Bird” in the past, but the instances are few and far between. Women can write and direct war movies, dramas, comedies and the most sentimental “chick flicks” imaginable – all of which have the potential to be of Oscar caliber.

But for now, the five men who represent the best of 2019 denote the long road to equity ahead. Hopefully, the Hollywood elite will soon realize women can do more than stand on stage in their glistening gowns and present award after award to the omnipotent Man.