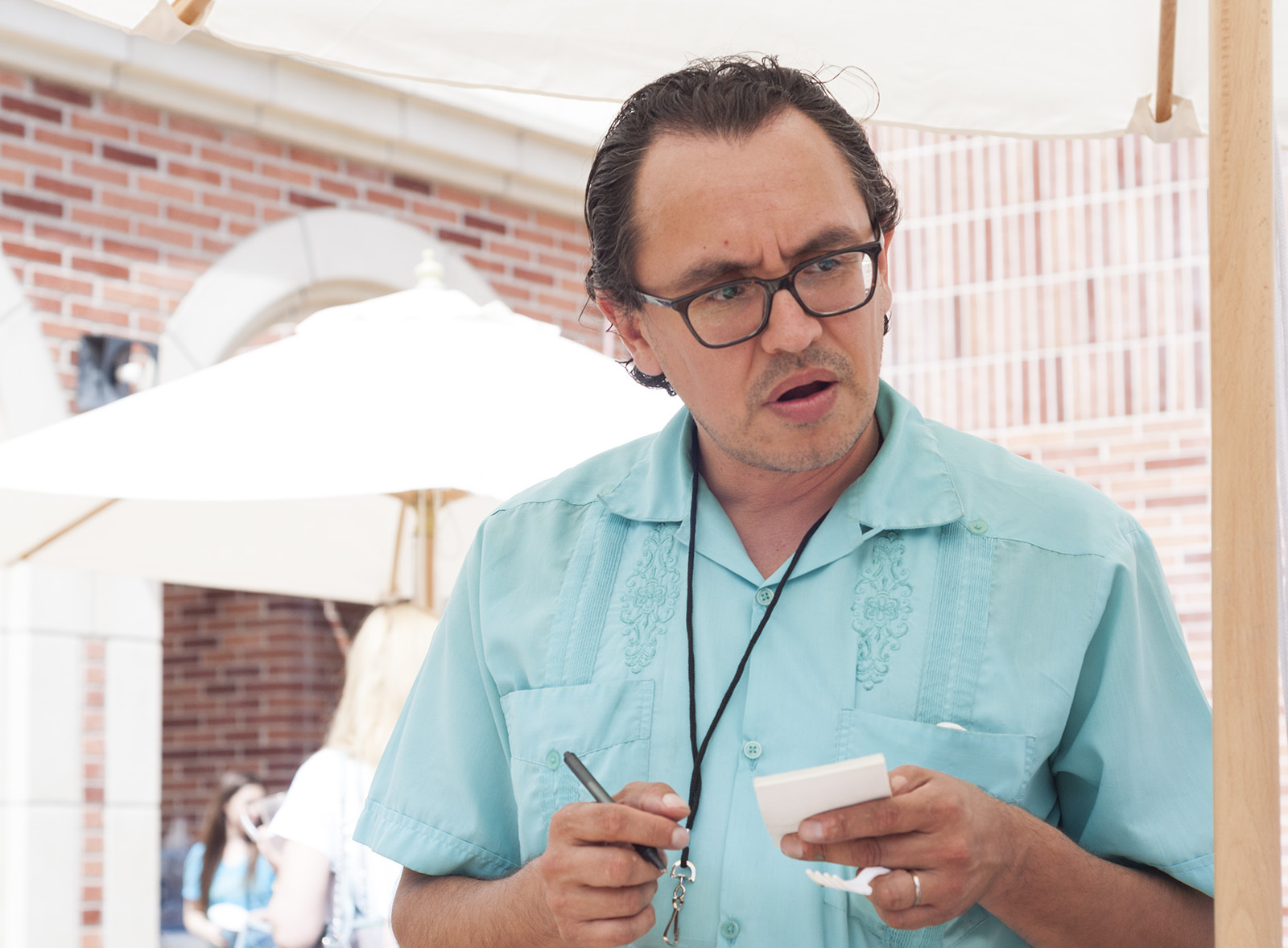 Gustavo Arellano knew exactly what he wanted to talk about on the stage of the Ace Hotel’s theater: a belt.

For Arellano, a Latin American studies alumnus, the belt holds personal and political significance for his family and society during the Trump administration.

Arellano shared the stage and told his story alongside other media creators Saturday night as part of Pop-Up Magazine’s spring tour. Pop-Up Magazine is a live-performance act that started in 2009 and centers on immersive storytelling to create an emotionally engaging night for both contributors and audience members through narration, visual aspects and a live band.

The Los Angeles performance featured stories from filmmakers, writers and photographers. The combination of storytelling mediums, such as journalism and theater, creates an unconventional space that Arellano said helps to share meaningful stories while leaving an impact on audience members.

“Humans have been hearing – hearing, not reading – stories since the beginning of our existence,” Arellano said. “We love to hear a great tale, and that’s what Pop-Up Magazine offers.”

Arellano, who currently is a columnist for the Los Angeles Times’ Opinion section, joined the Pop-Up Magazine team after pitching an idea to the team. Once involved, Arellano honed in on his personal story: a tale about a belt, the “cinto piteado” – a special handmade belt from Arellano’s part of Mexico, Zacatecas. Arellano said the belt was a source of pride for his father. Though Arellano hasn’t worn the item as much as his father, the recent election of Trump motivated Arellano to express his Mexican heritage proudly and casually.

His performance at Saturday’s show included Arellano’s own narration combined with visual elements and colorful graphics projected on a screen, overlaid with pictures of the belt and Arellano and his father. The effect was meant to emphasize Arellano’s personal story and visually express the importance of the cinto piteado.

“I want them to learn about this particular belt. Sometimes, what you wear is more than just clothes,” Arellano said. “Sometimes what you wear is a representation of how people feel or react to certain instances.”

Arellano talked with Tina Antolini, a senior story producer at Pop-Up Magazine, throughout his piece. Antolini developed pitches for the show before coordinating with art directors and sound technicians before and during the performance itself. Antolini said the stories told onstage offer a new viewpoint of the world and garner emotions that audience members might not have heard of yet.

“We’re always looking for some sense of surprise or revelation, a story that gives us information for a new way of looking at the world, or stories that are really funny or emotional or moving in some way,” Antolini said. “Pop-Up Magazine … (hybridizes) what is often a static experience.”

Combining the live performance aspect of theater and the long narrative nature of journalism created the challenge of presenting a complex issue in an approachable format for audience members. Antolini’s radio producer background gave her insight into how to create conciseness in her stories.

For Arellano, the performance aspect of Pop-Up Magazine presented a new challenge: preparing from an essay while speaking naturally before a crowd. Arellano is no stranger to speaking in front of crowds because of his current experience as a journalism teacher at Orange Coast College, he said. But reading set material and presenting it in a more natural way was a new experience for him. He explored this new experience Saturday as he stood in front of a podium to the side of the stage while the projected graphic images and the Magik*Magik Orchestra’s music brought life to his story.

Embracing the combinatorial approach to storytelling in Pop-Up Magazine was also on the mind of Bess Kalb, a writer for Jimmy Kimmel Live and a contributor for Saturday’s show, she said. Pop-Up Magazine was a new experience for Kalb as well; she currently writes comedy for other people to perform, but has not done her own stand-up comedy for an audience as large as Saturday’s, she said.

Her set revolved around her cousin’s 9-year-old daughter, whose captions for New Yorker comics are beyond her years, such as a rat trying to fly off a building and a pigeon saying, “You okay there, buddy?!” Kalb’s narration was layered with images of her captions and included an interview between Kalb and the girl, which was presented through a voiceover of the young girl that matched up with her handwriting projected on the stage.

As for Arellano, the audience is both important and irrelevant to the story itself. Unfazed by those who do glance over his stories, Arellano said he pursues tales that can create informational and emotional impact in the audience through immersive methods – such as through his cinto piteado story at the Pop-Up Magazine show.

“I imagine that the audience for Pop-Up Magazine are people who like stories, that’s why it’s an honor (to participate),” Arellano said.