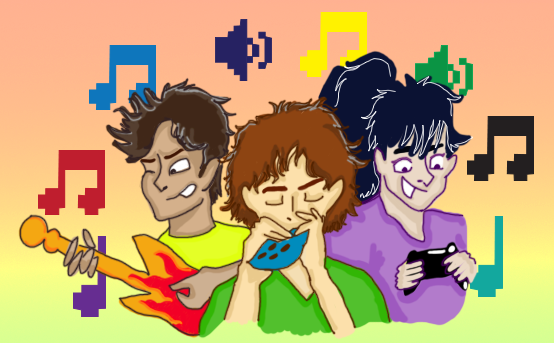 Tune in and take note: Music can be the baseline of a well-composed game.

The soundtrack can provide a catchy background ambiance for video games, but it can also contribute more significance to the gameplay experience. Sometimes music drives gameplay and other times it’s a possible booster of cognitive function.

The most obvious example of the utilization of music in video games comes in the form of rhythm games. Popularized by “Dance Dance Revolution” and later again by “Guitar Hero,” the rhythm genre forces players to focus on the music in order to actually play the game. Players have to dance or press buttons – often on musical instrument-shaped game controllers – in time with the beat or melodies, often with increased difficulty the faster or more rhythmically complex the songs. Messing up the rhythm can cause the player to lose points or even be eliminated.

While mainstream rhythm games such as “Just Dance” continue to sell, some developers have introduced variations on the rhythm gaming genre. For instance, in Disco Pixel’s 2014 PlayStation Vita game “Jungle Rumble: Freedom, Happiness and Bananas,” the player commands a squad of monkeys by tapping the screen in time with the bongo-heavy music.

The game integrates the soundtrack into real-time strategy in a way players don’t often see. A monkey perched on one platform of leaves can move to a second, adjacent platform if the player taps the first and second platforms twice alternatively. Likewise, a monkey can throw a coconut to attack primates nearby by tapping their own platform three times and the enemy platform once. But if the player taps out of time with the music, their action is cancelled and they must wait for the next four-beat measure to try again.

In games where the soundtrack doesn’t play a direct role in the main objective, the changes in the music can notify the player of specific information. In many action-adventure games, such as the “Witcher” series, the regular soundtrack transitions into a more menacing tune when an enemy approaches. Players learn to recognize the change in music – it’s like a sixth sense alerting them to danger even if the enemy isn’t yet in their direct line of sight.

The same sixth sense can be used to notify players of just about anything. In the “Mario Kart” series, the soundtrack speeds up to remind players they’re on their last lap, while “Splatoon” warns its players that time is running out by playing a distinct 60-second music clip when rounds only have a minute left.

In tower defense game “Plants Vs. Zombies 2,” the ’80s-themed world, Neon Mixtape Tour, forces the player to change strategy with the shifting soundtrack. The music may change abruptly during battle, causing all zombies to match their walking speed to the new tempo and certain classes of zombie to gain or lose abilities.

For example, Glitter Zombies skate over plants and emit a glowing rainbow aura that protects zombies behind them while the pop soundtrack plays, but Punk Zombies dance quickly forward and kick plants onto different tiles when the soundtrack switches to more chaotic, energized music. When their specific song isn’t playing, however, the specialized zombies behave like their generic brethren.

The music affects more than just the zombies. While playing the ’80s levels, the bopping music pumped me up to punch some dancing zombies in their undead faces. In my experience, video game music tends to influence mood or motivation.

Some argue the music can help players concentrate and achieve the game goals, while other writers have linked video game music to increased work productivity in everyday life. The arguments suggest background noise, without the distraction of human speech, may help people concentrate, so the generally upbeat but repetitive tunes in video games should keep people engaged without distracting them.

Video game music can be so engaging, in fact, that it’s hard to forget the songs. An especially dynamic use of music can be seen in the “Legend of Zelda” series, where players use musical instruments to solve puzzles by playing a host of magical songs. In “The Legend of Zelda: Ocarina of Time,” catchy tunes on the soundtrack become songs the player can perform on their ocarina to generate various effects. For example, playing “Epona’s Song,” the background theme from the in-game horse ranch, can summon your steed to your side.

It’s been several years since I played “The Legend of Zelda: Ocarina of Time,” but I can still remember the button sequence to play the “Song of Time” and the “Song of Storms.” I thought they were so catchy that I would play them on the ocarina for fun. Rather than force players to memorize generic button combos to use each newly acquired ability in-game, these developers managed to tie most of the abilities to songs that would make them easier to remember.

The iconic music of games like Zelda makes them both timeless, and music continues to draw people to video games. But music has much more to offer than just ambiance. Across video game genres, soundtracks continue to evolve as integral components to game design and the gaming experience as a whole.