Movie review: ‘The Shape of Water’ 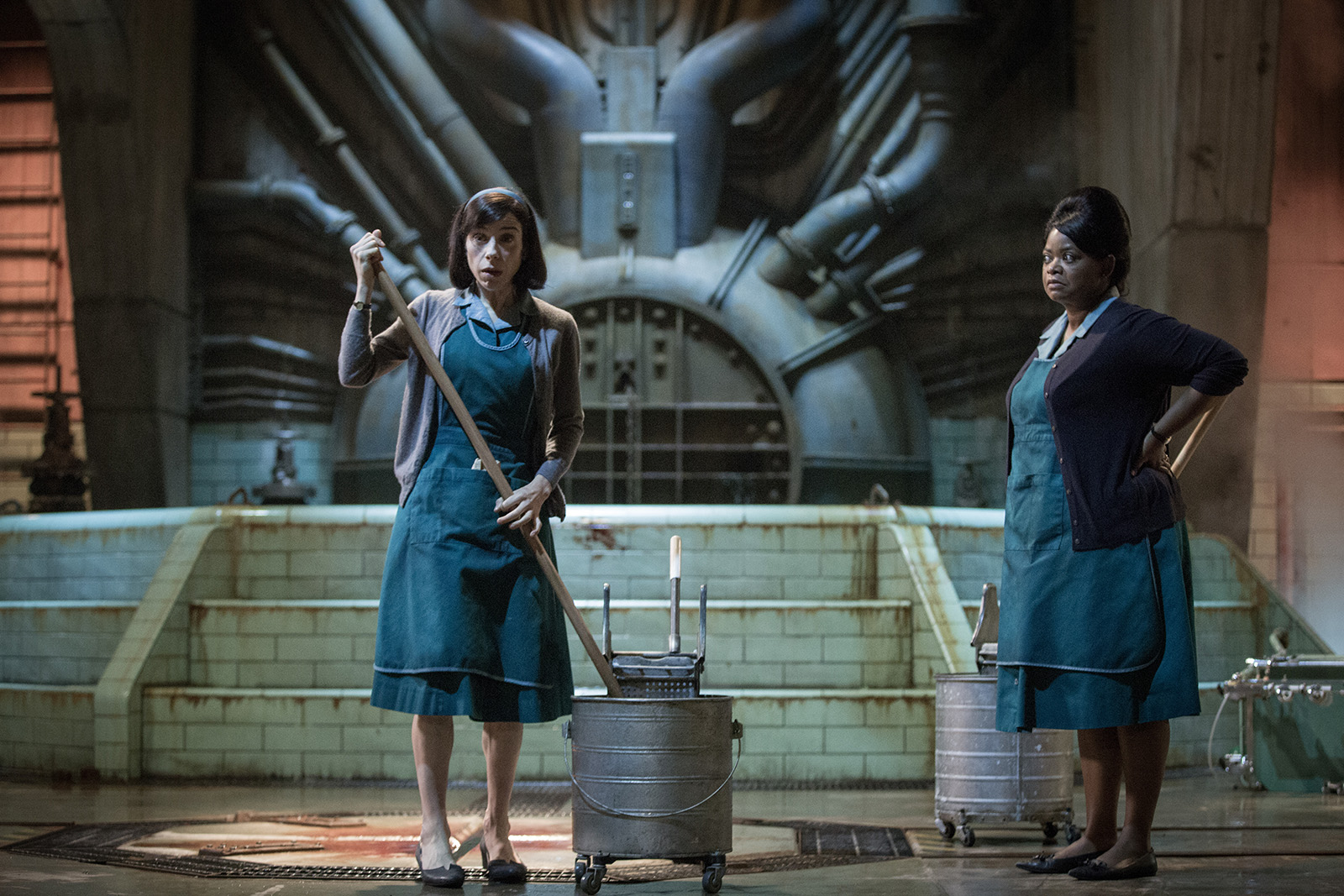 “The Shape of Water” makes audiences fall in love with a relationship between a mythical amphibian creature and a mute janitor.

The plot of Guillermo del Toro’s latest film sounds a bit like an LSD-induced daydream: A mute janitor named Elisa (Sally Hawkins) falls in love with an amphibious creature (Doug Jones) that the U.S. military is holding in a government research facility during the Cold War era. The chemistry between the sexually deprived Elisa and the poorly treated amphibian highlights a theme common to many del Toro movies – the similarity between broken humans and misunderstood monsters. Del Toro fills the bizarre yet charming story with charismatic, relatable characters and tension-building plot points with satisfying conclusions.

The movie itself is a collision of gothic horror, romance drama and espionage thriller. It takes inspiration from each, creating a colorfully explosive yet thoroughly cohesive project with the suspenseful story progression of a thriller and the dialogue-driven characterization typical of a romantic comedy.

In the process of establishing the romance between Elisa and the Amphibian Man, the film treats itself lightheartedly without overly concerning itself with the ridiculous nature of their relationship. Instead of attempting to romanticize the interspecies relationship, del Toro uses the premise of the movie to highlight a more humanlike love story between Elisa and the Amphibian Man.

One of the key strengths of the film is its actors’ high-caliber performances, making the surreal storyline engaging for its audience. Hawkins successfully portrays her character as both broken by her social isolation and hopeful in her pure optimism for a better life. From the subtle shifts in facial muscles to the deft movements of her body used to carry out sign language dialogues, Hawkins’ performance breathes life into the chaotic decisions Elisa makes in the film, such as breaking out of government labs and engaging in a relationship with a creature from Amazon folktales.

Jones, who has previously played nonhuman characters such as Fauno from “Pan’s Labyrinth” and Abe Sapien from “Hellboy,” once again enhances his makeup and prosthetics with an effective portrayal of the Amphibian Man’s complex emotions. While playing the Amphibian Man, Jones only communicates through basic sign language, yet he still succeeds in humanizing the strange character.

In addition to a compelling bond between the central couple, the film also presents an exemplary antagonist. Michael Shannon delivers tension and paranoia as Richard Strickland, the ex-soldier who is in charge of the Amphibian Man and who aims to impress General Hoyt (Nick Searcy). Strickland exudes authority and menace through his posture, dialogue and facial expressions while simultaneously justifying the motives behind his cruelty in front of the audience. The movie makes him a relatable character by presenting him as not only a villain, but also as a human being who cares about his family.

The film’s other cinematic elements also help support its character development and plot devices. Alexandre Desplat’s jazzy score exhibits a classiness reminiscent of the 1960s, during which the movie takes place. The music is soothing during romantic scenes and suspenseful during the action sequences, creating a diverse range of tones for the movie. The film’s cinematography is also both colorful and dreamy, fully realizing the world in which the movie takes place through its inclusion of small details such as neon lights on the streets or the complex scientific equipment inside the lab.

After filming giant robots battling amongst cities and a red demon fighting mythical monsters, del Toro has to work hard to shock and satisfy his fans. However, the charmingly written and well-shot “The Shape of Water” does just that with a riveting romance between a water creature and a lonely woman.