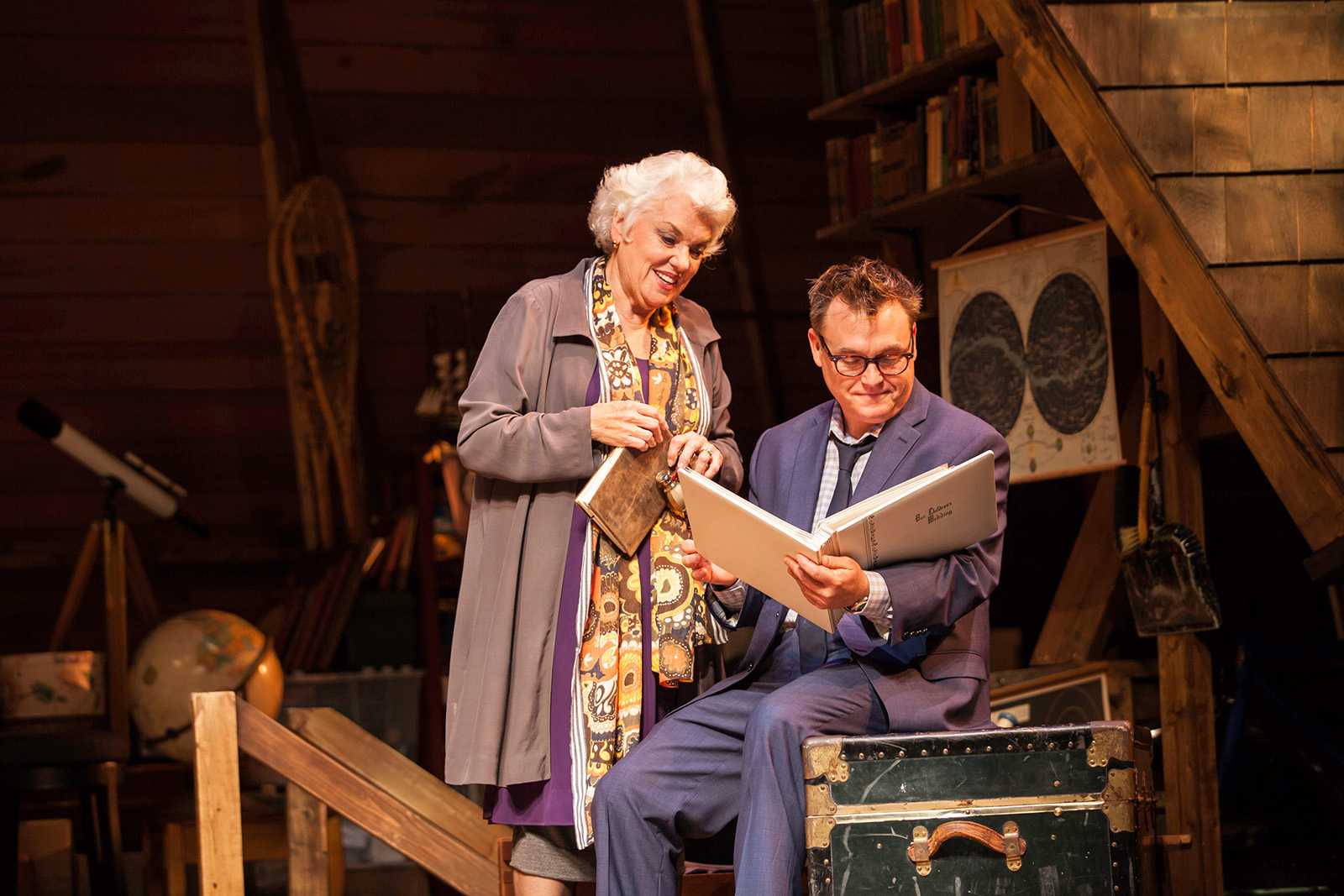 The beginning dialogues in “Chasing Mem’ries” feel a bit stale, much like the stuffy attic the play is set in.

Directed by Josh Ravetch, “Chasing Mem’ries: A Different Kind of Musical” runs from Nov. 7 to Dec. 17 at the Geffen Playhouse. The play portrays the newly widowed Victoria (Tyne Daly) as she mourns the death of her late husband, Franklin (Robert Forster), while pacing around her attic during his memorial service. Although some of the dialogue between the characters seemed trite and forced, the authenticity of the actors’ performances, particularly Daly’s portrayal of Victoria, shine through the script’s long diatribes. Daly seamlessly gives life to a character who stubbornly avoids closure regarding her husband’s death while ironically seeming to grasp for it during the entire 90-minute runtime of the production.

The play opens with Victoria’s son, Mason (Scott Kradolfer), ambling down the theater aisle and calling out to the audience members by fictional names as if they were family members. The scene then shifts to an attic on stage where Victoria sequesters herself, refusing to socialize with the guests and choosing instead to recollect the memories of her husband inside the house. She dusts off their old photo album and reminisces to the classical music that resonates from a turntable in the corner of the attic – played by the instrumental ensemble composing piano, cello and flute players below the stage.

Each aspect of the set is meticulously designed, down to the relics from Victoria’s past, including an old telescope and planetary mobile that clearly belonged to her son, now a professor in astronomy. In the corner, an old trunk houses Franklin’s old suit, which Victoria cradles in her arms and presses deeply to her face, unable to fully let him go. Her husband’s death is the driving force behind Victoria’s struggle – she’s stuck in between the past and the present.

However, the inner conflict gradually broiling within Victoria is gripping, but takes too long to arrive. The initial lighthearted rapport between Mason and Victoria drags on, as does a heated conversation about Mason’s fiancee. Although Mason’s unconventional relationship serves as a foil to Victoria’s once–stable one, the plot point seems convoluted and doesn’t add much to the narrative of the play.

The banter between the two characters on stage also does little to further the development of the characters. Extended banter pokes fun at Victoria for misunderstanding millennial jargon such as “polyamorous” and her attachment to the way things used to be – she repeatedly brings up her consternation over libraries no longer carrying books but high-speed computers. The jokes lack a topical punch, and the trope of making fun of older generations for not keeping up with current trends is rather banal.

However, as the play continues, Victoria’s endearing interactions with a hallucinated version of Franklin reveal heartfelt anecdotes that explain why she holds so tightly to the past. The pair look back on how they met by chance in a broken elevator, making Franklin’s untimely death more somber and showing that a life can end as quickly as it started. Their touching moment unearths feelings of hollow nostalgia filled with genuine content, an emotion hard to come by in the play.

The most poignant moment of the show occurs during the couple’s dance to one of their favorite songs as it reverberates throughout the small room. The pair stands close to each other but do not touch, as Victoria’s hands hover ever so slightly above Franklin’s. Remembering that Victoria’s incarnation of Franklin is merely a figment of her imagination tinges the sanguine moment with genuine sadness. Victoria is once again stuck between two worlds. Whether she can reconcile them remains an unanswered question, even after the stage lights dim on her final sung soliloquy, in which she ponders what to do going forward.

“Chasing Mem’ries” treads the line between loneliness and peace, and in the scenes when Victoria speaks with her dead husband, blurs the boundary between delusion and remembrance. Daly’s radiant portrayal of Victoria doesn’t offer much closure on the subjects, but instead proves that a life can be remembered in more ways than one.