Concert review: Portugal. The Man at the Hollywood Palladium 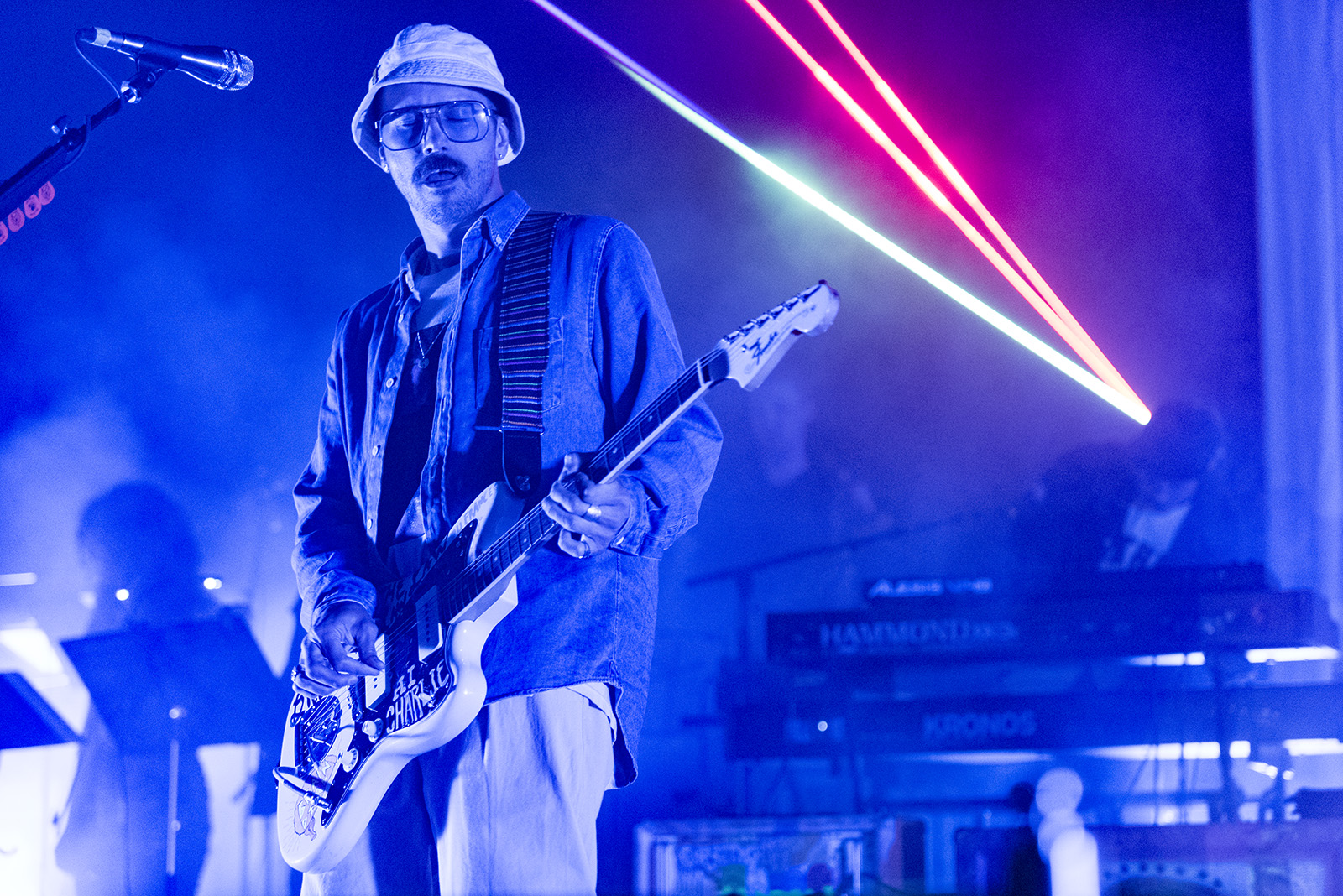 Portugal. The Man performed popular hits such as “Purple Yellow Red and Blue” and “Modern Jesus” amid flashing strobe lights and an energized crowd at the Hollywood Palladium. (Michael Zshornack/Photo editor)

Lead singer of Portugal. The Man John Gourley waded through a technicolor jungle of blue and green flashing lights decked out in a pair of sunglasses and khaki pants.

The Alaskan band’s smooth sound filled the Hollywood Palladium on Sunday night. From a nostalgic prelude to a set list filled with songs from earlier albums, the evening was dedicated to repurposing old classics into an electrifying spectacle.

As a clever foreword, a line of writing appeared on the screen behind them, explaining that there would be no fruitless small talk during the concert.

“We are not very good at stage banter” appeared in white, capital letters on a stark black background, a promise the band kept until the end of its set.

The band immediately launched into a rendition of Metallica’s “For Whom the Bell Tolls,” with the same gritty guitar riffs but with the addition of a rollicking drum beat. Without pause, it moved into a Pink Floyd cover that made the crowd excited, before seamlessly transitioning into one of Portugal. The Man’s biggest hits, “Purple Yellow Red and Blue.”

The syncopated guitar notes encouraged audience members to break out into a giddy dance as they reached out with their fingertips for the strobe lights overhead. The silhouette of a band member brandishing a star-shaped tambourine flitted across the brightly lit screen among motifs of goats and pyramids.

During “Feel It Still,” the most popular single from the new album, two dancers came on stage, their shapes projected onto the screen while they matched their movements to the jerky rhythm. The crowd sang along, accompanying Gourley’s gurgling croons as they evaporated into the smoky air.

His crisp staccato melted into cloying vocals in “Head Is A Flame (Cool With It)” as he cried, “We all get a little bit older in this day and age, but we deal with it,” dripping over a robust guitar sound that vibrated throughout the floor. The band continued to slow things down with “So Young,” which felt like a sleepy ballad rising and falling with brass fanfare.

Finally, after the more leisurely set of songs, the familiar beeping intro to “Modern Jesus” stirred the crowd into an excited frenzy. They proceeded to yell the words to the chorus in an anthemic declaration, bouncing up and down on the sticky wooden floor.

While the band has been criticized on its latest album for its party-tune sound, during its performance it demonstrated an exceptional musical ability. Despite the heavy instrumentation, Gourley’s lofty vocals soared above even the thunderous singing of the crowd.

As the concert was reaching its end, the white lettering reappeared on the screen, this time spelling out brief messages such as “Let’s Get Weird,” and “Thank You [city name],” staying consistent with the irreverent theme of the night.

After a reprise of “Feel It Still,” the band ended its set with a cover of “Don’t Look Back In Anger” by Oasis. Gourley’s nasally voice was a fitting tribute to the original, finishing the evening with a charming throwback to ’90s reverie.

Although the energy throughout the set was intoxicating, it could’ve benefitted from a few pared down songs such as a stripped rendition of “Feel It Still” the second time it was played, to display the group’s technical and emotional range.

As the band exited the stage, a short note reading “Please Stand By” popped up behind them, and sure enough, the band members returned for an encore. As Gourley rode out the last lines of “Atomic Man” in a voice barely above a whisper, he clasped his hands in front of his guitar and delivered a drawn out diminuendo into the dimming lights.