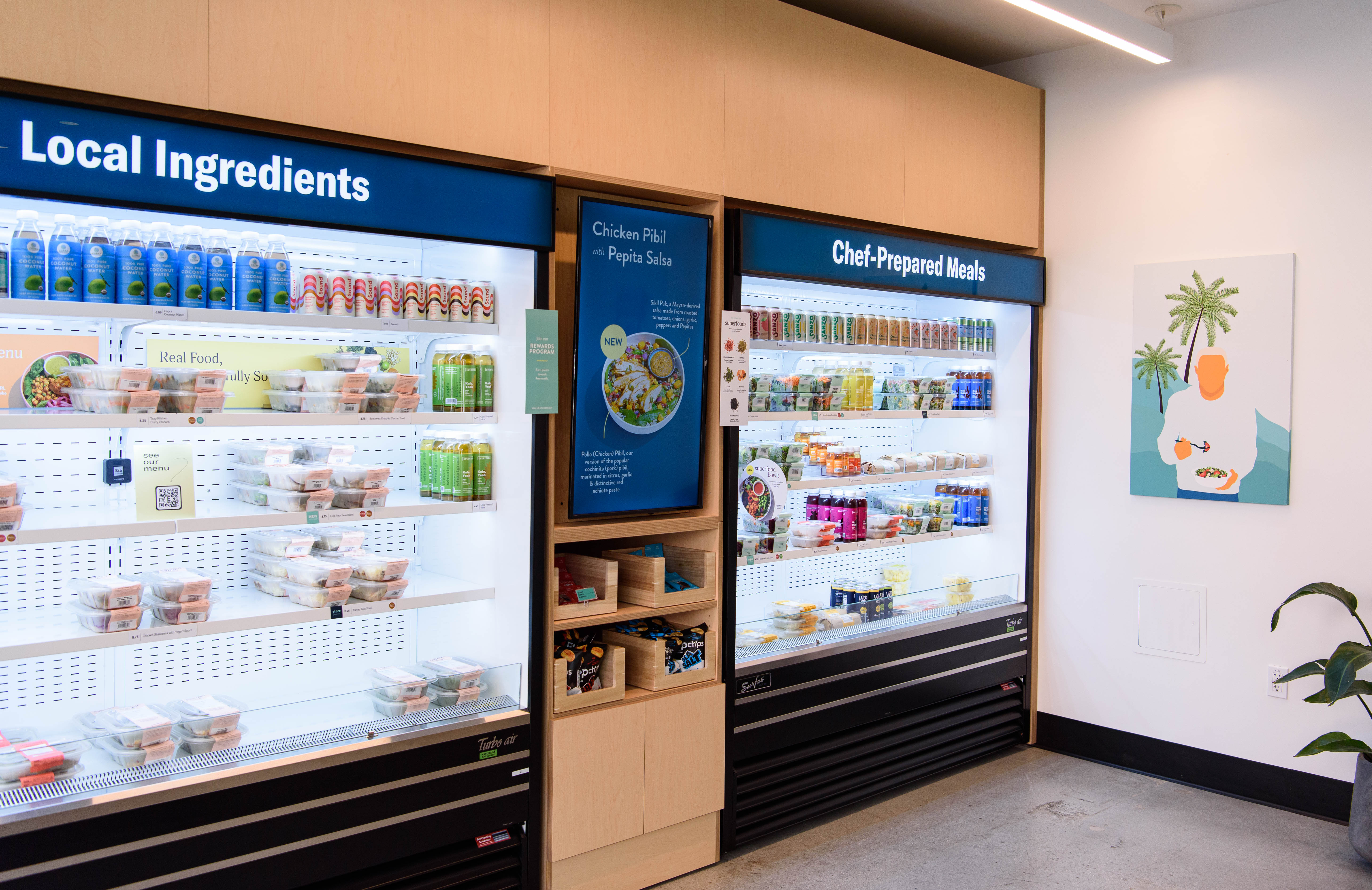 Located on Lindbrook Avenue, Everytable adds a bright pop of grab-and-go cuisine to Westwood’s culinary scene. But the experience does not live up to the vivid pop, writes Ionescu. (Amelie Ionescu/Daily Bruin senior staff)

Even though Everytable might be good for every day, it’ll be hard to justify eating there all the time.

Advertised as serving clean, affordable food, Everytable held its grand opening in Westwood on Jan. 18. Boasting prices ranging from $4.95 to $9.95, the rapidly expanding chain of grab-and-go healthy food – from salads to hot meals – has 39 locations in Los Angeles alone, alongside locations in other Southern California cities and New York City. While the food proved better than expected for grab-and-go, the nature of the chain makes it difficult to truly enjoy the dishes.

Almost 30 minutes from the Hill, Everytable’s location leaves much to be desired. Located on Lindbrook Avenue, the shop’s bright blue interior and people painted on the walls make it look enticing and new. The greenery and paintings alongside the clean, minimalistic interior make everything appear open and inviting, but the lack of indoor seating – two tables and six chairs total – puts the nail in the coffin that a customer shouldn’t stick around.

The location lives up to its “real food, real easy” claim, as three open refrigerators lie stocked with drinks and food, all bright and welcoming. Appetizing displays and little tokens next to the names denote important facets of the food, which is a useful detail to help quench people’s questions about what to grab. Grab-and-go chips and desserts placed next to the cashier stand entice the casual observer into picking one up. Everything is easy, simple and clean.

Nevertheless, the pristine walls and shiny refrigerators feel contradictory to the main selling point of the restaurant. The fact that the “fresh, chef-cooked meals” were tossed into a microwave and heated while the chicken wrap was served cold after the worker had to read the packaging left much of the freshness questionable. Quality and taste of food aside, the sterile and modern atmosphere and the lack of a “home-cooked” feel are confusing when attempting to determine the real message of the location. A focus on the idea of the food being healthy and locally sourced would fit the clean, bright atmosphere better.

Despite this, all of the food looked colorful and appealing upon first glance. Cutting open the buffalo chicken wrap let a display of oranges, greens, pinks and other bright colors stand vibrant against the white of the chicken and wheat wrap. The first bite was light and flavorful, with carrots and cucumbers adding necessary crunch to the tender onions and chicken. Although the food was tasty, nothing stuck out. The wrap tasted like it had been bought out of a grab-and-go refrigerator – just over a step better than the average pre-made meal.

The Nashville hot chicken pasta was an impeccable mixture of flavor and texture, with the Alfredo sauce, the spices, the chicken and the spinach all combining to create a well-balanced meal. The pasta again felt a step above your average quick takeout, living up to Everytable’s meal prep origins. The colors of the food were pleasantly enticing, as the spinach and spices made everything look more appealing. Both dishes provided an incredibly filling portion size, making the price and the experience more than worth it.

The drinks served up a different story. Unlike the light and airy flavors of the food, the rose berry smoothie’s flavor hit uncomfortably hard. For fans of rose, the drink gives exactly what it says it will, but the smoothie is overwhelming for anyone who wants a lighter flavor. Furthermore, Everytable offers drinks outside its own brand such as the lychee sparkling water – which was useful to display, but not incredibly unique.

Despite the food tasting and looking a notch above what can be expected from grab-and-go service, no amount of spices and pretty wall decorations can mask the feeling of eating a reheated “hot meal” that claims to be “freshly prepared.” While the affordable prices and satiating capabilities of the food make it a good place for busy students to stop by if they are out of food or cooking is too difficult at the moment, it’s certainly not a place where people would go because they crave the dishes or the atmosphere.

Maybe Everytable is just not for everyone. 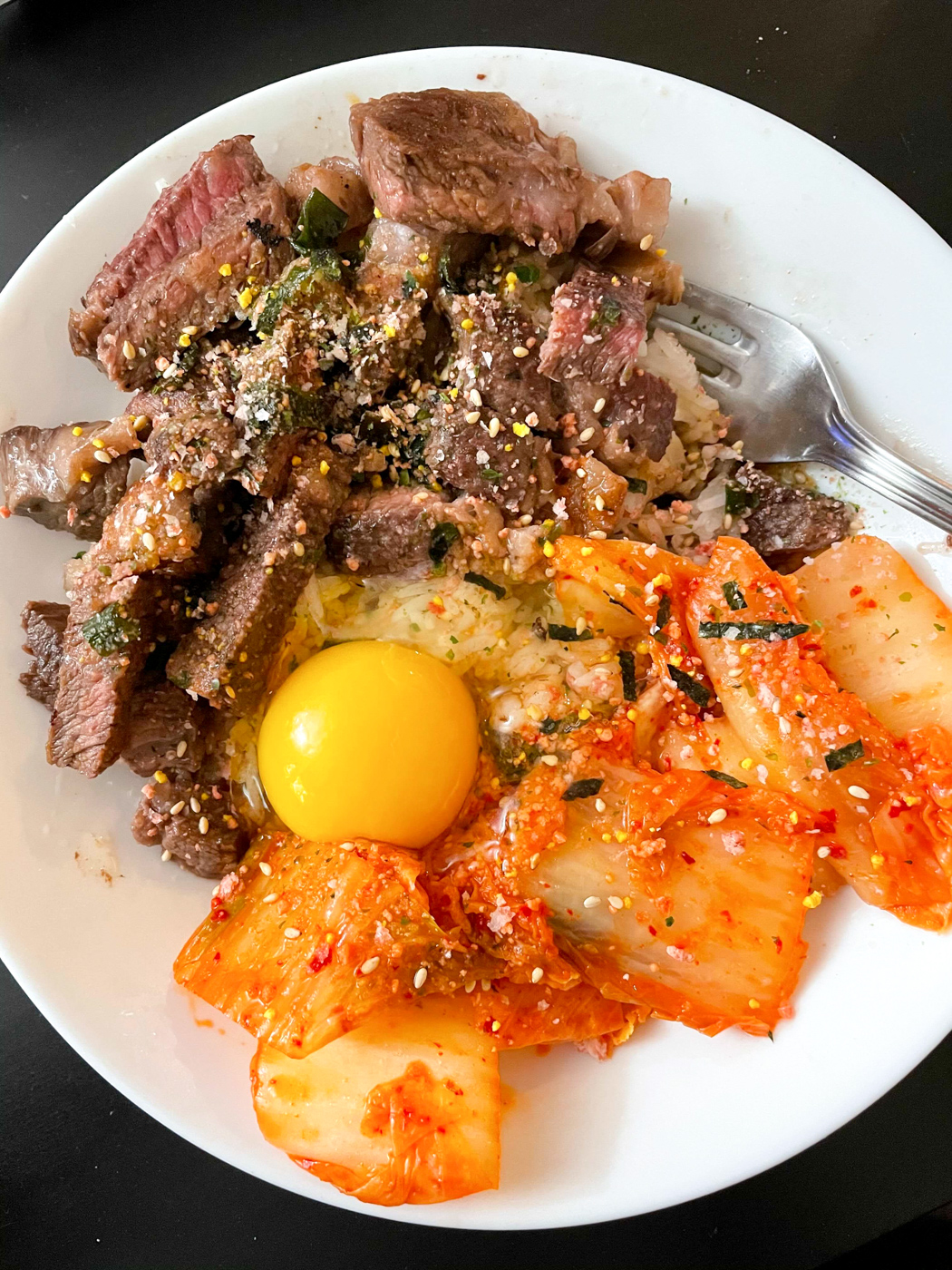 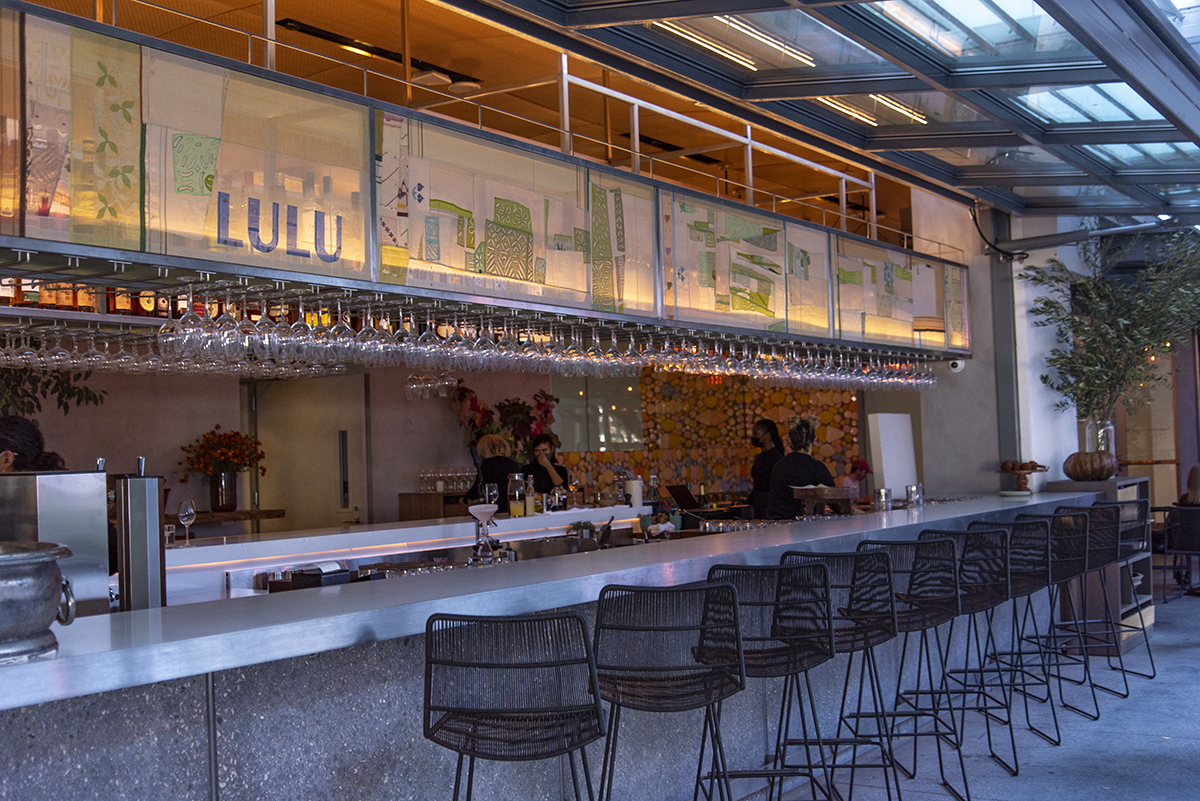 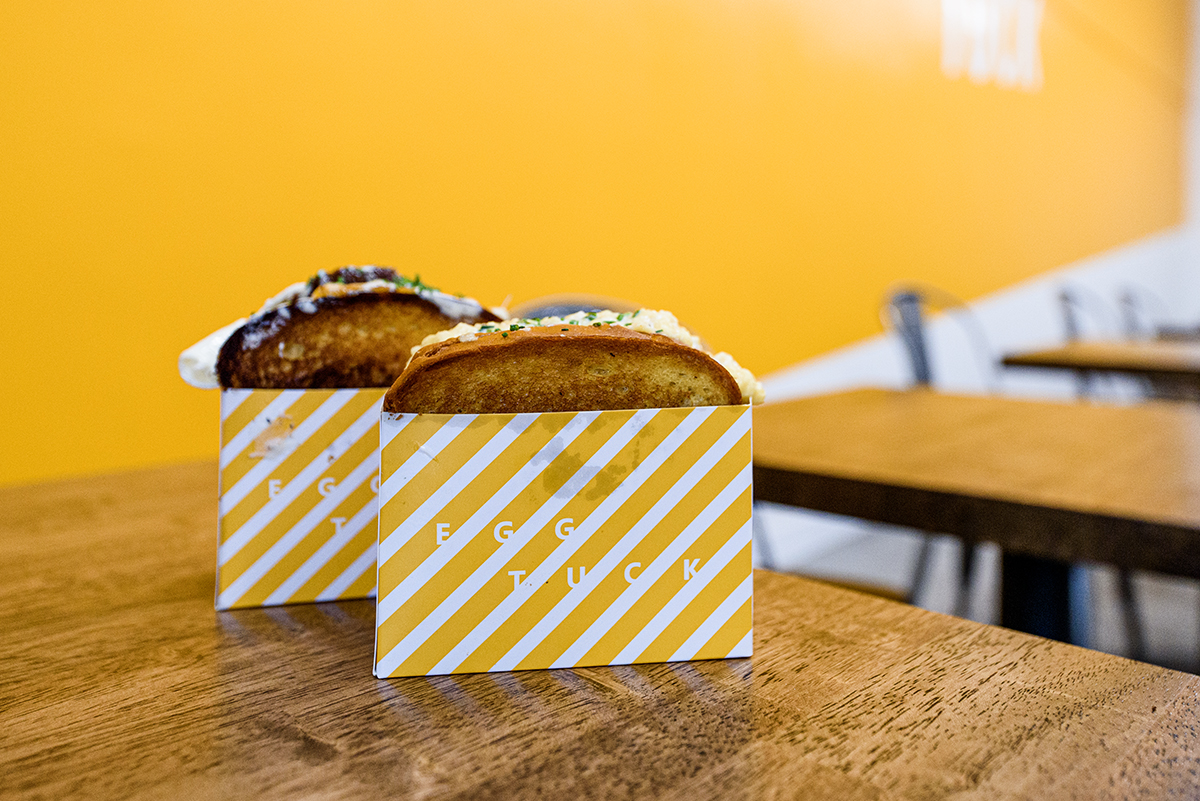 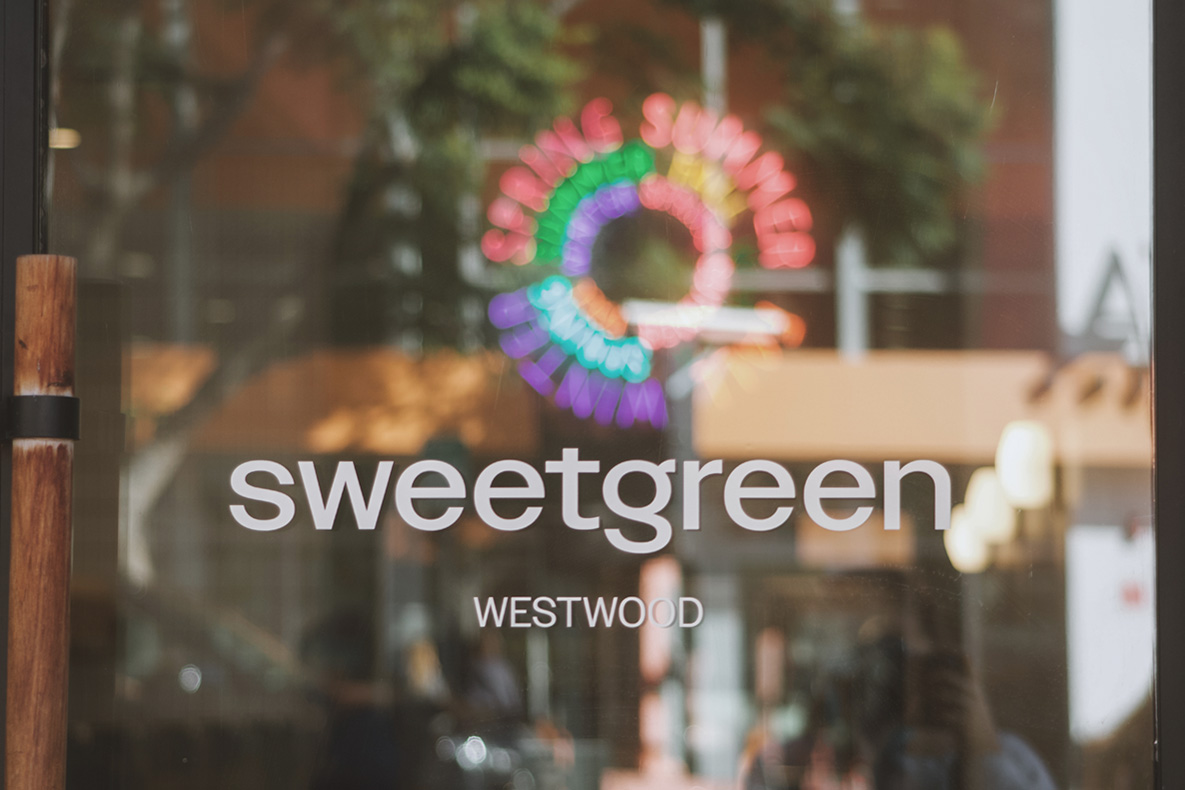