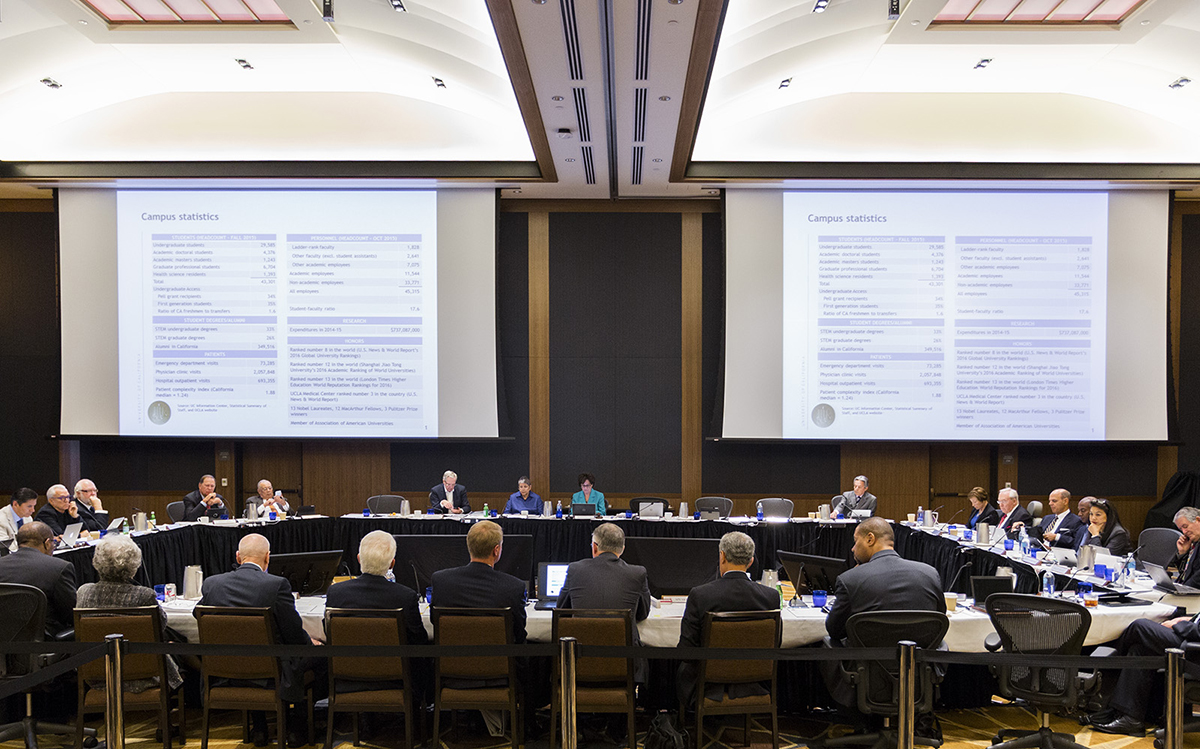 The University of California Board of Regents sits for a meeting. The Board met in November at UC San Francisco to discuss topics such as the midterm elections and effects of the COVID-19 pandemic. (Daily Bruin file photo)

The Board of Regents, the governing body of the University of California, gathered Nov. 16 and 17 for its bimonthly meeting in person and via teleconference at UC San Francisco. They discussed the UC community’s civic and community engagement during the 2022 midterm elections, hiring opportunities for students without legal status and UCLA’s move to the Big Ten athletic conference.

Meetings began Wednesday with an opportunity for public comment. UC community members and stakeholders addressed concerns with the fetal organ harvesting practices at UCSF, requested pay increases for UC staff not represented by a union and asked the University for an official meeting to discuss hiring opportunities for students without legal permanent resident status.

Multiple public comments also referenced the United Auto Workers unions’ strike, which began Nov. 14 across the UC, and called on the regents to address unfair UC labor practices and improve the treatment of academic workers.

[Related: UC academic workers walk out in largest US strike since 2019]

Following the comments, Regents Chair Richard Leib said individuals of any background are welcome at the University, especially as high school students prepare to submit their UC applications. He discussed the importance of inclusivity in light of recent instances of racism at higher education institutions across the country.

“Our commitment to those students filling out their applications right now is that you don’t have to be worried or sick or tired,” Leib said. “We, as a Board and in conjunction with University leadership, will continue to make sure you are not only welcomed in the UC community but that our different viewpoints are respectfully expressed.”

Both Leib and UC President Michael Drake also thanked Provost and Executive Vice President for Academic Affairs Michael Brown for his work, as he is retiring.

Drake also addressed UC’s commitment to reaching an agreement with UAW, as they have previously bargained successfully with four other unions representing other workers employed by the University. Finally, he expressed gratitude toward University members who participated in the Nov. 8 midterm elections.

“Voting is a cornerstone of a healthy democracy, an expression of our values and our hopes for the future and a right we must never take for granted,” he said. “I couldn’t be more proud to be part of a community that is engaged on the most urgent and consequential issues of our time.”

During the public engagement and development committee meeting, University professors and researchers discussed the midterm elections. Dan Schnur, a political science lecturer at UC Berkeley, said these elections were the fourth in the last 100 years in which the president’s party did not lose many seats in Congress. He attributed this success to the overturning of Roe v. Wade by the Supreme Court in June, the presence of former president Donald Trump on the campaign trail and the substantial turnout of swing voters.

Since control of Congress is now divided between two parties, Schnur said the most impactful legislative actions will happen at judicial, executive or state levels.

He also emphasized the importance of students without permanent resident status and their contributions to the University, as well as how the UC should take the opportunity to increase hiring for this community. A recent UCLA campaign called Opportunity for All has asked the University to begin hiring students without legal status based on recent research that suggests state institutions are legally able to.

Next, Richard Hasen, the director of UCLA School of Law’s Safeguarding Democracy Project, addressed the need for free and fair elections and described the work his project does, such as policy and law recommendations and running events about conducting democratic elections.

Finally, executive communications specialist for the UC Office of the President Stephanie Beechem discussed University civic engagement, which saw Get Out the Vote efforts systemwide, with every campus hosting a vote center, polling location or ballot drop-offs.

The academic and student affairs committee also looked at the results of a faculty and instructor survey on experiences with the COVID-19 pandemic during the 2021-2022 academic year. The surveys found that faculty reported increased disconnect from their students and lingering issues with completing faculty responsibilities such as research.

They also discussed the annual accountability sub-report on diversity, in which the 2022 report looked into how the UC is working to diversify every aspect of the community from undergraduate populations to faculty hiring.

In the governance committee, the regents approved an amendment revising the chancellor hiring process to allow the UC president to propose a candidate to the committee before the rest of the regents.

On Thursday, during a board meeting, Drake announced that the regents will make a final decision on UCLA’s move to the Big Ten athletic conference on Dec. 14. He added that both UCLA and UC Berkeley will increase their efforts to provide holistic resources to their student-athletes, including expansion of mental health and nutrition services.

“Together we undertook a closer analysis of the fast-moving landscape for collegiate athletics which brought new ways to support our student-athletes,” Drake said. “I’m grateful that at every step Gov. Newsom and the regents kept the focus on the potential impact of these changes on our students and how we can work together to support the student-athlete experience.”

Additionally, a UCLA student-athlete survey was introduced, wherein 35% of participants said they believed the move to the Big Ten was a good idea 7% said it was not. The biggest student concerns for the move were increased travel time and class absences, and the biggest perceived benefits were increased national exposure and resources.

The regents also discussed progress in campus safety and the efforts to increase community and service-driven safety options and transparency with students and staff.

The next full Board of Regents meetings will be held from Jan. 17 to 19 at UCLA. 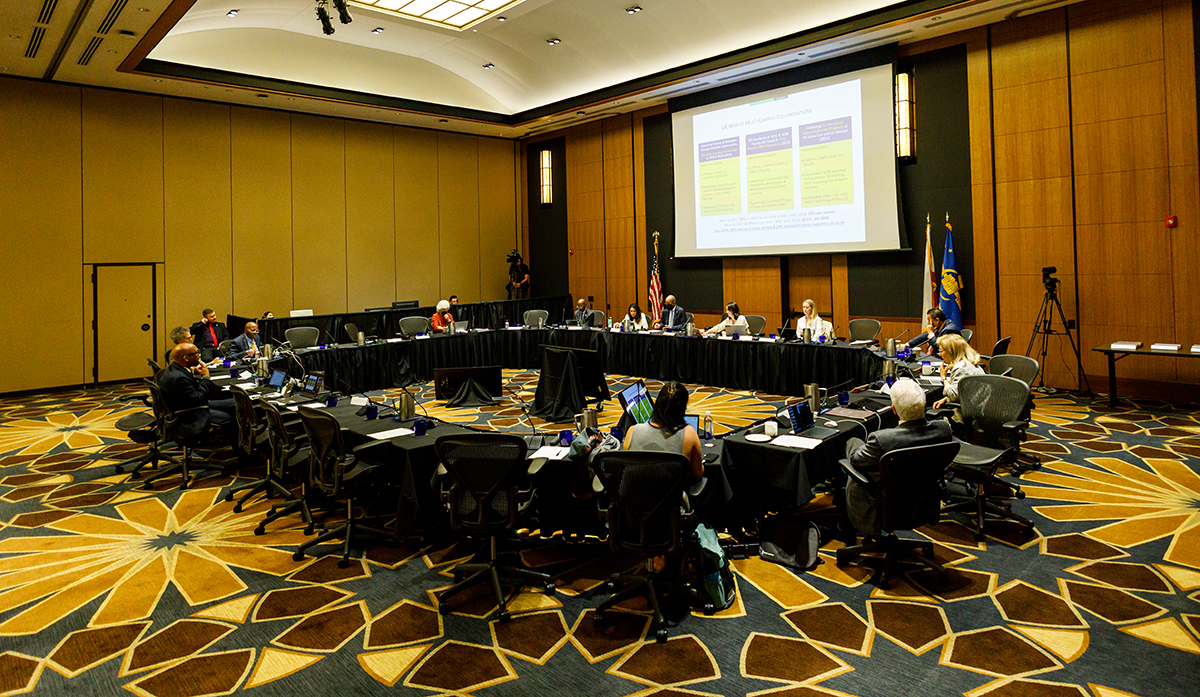 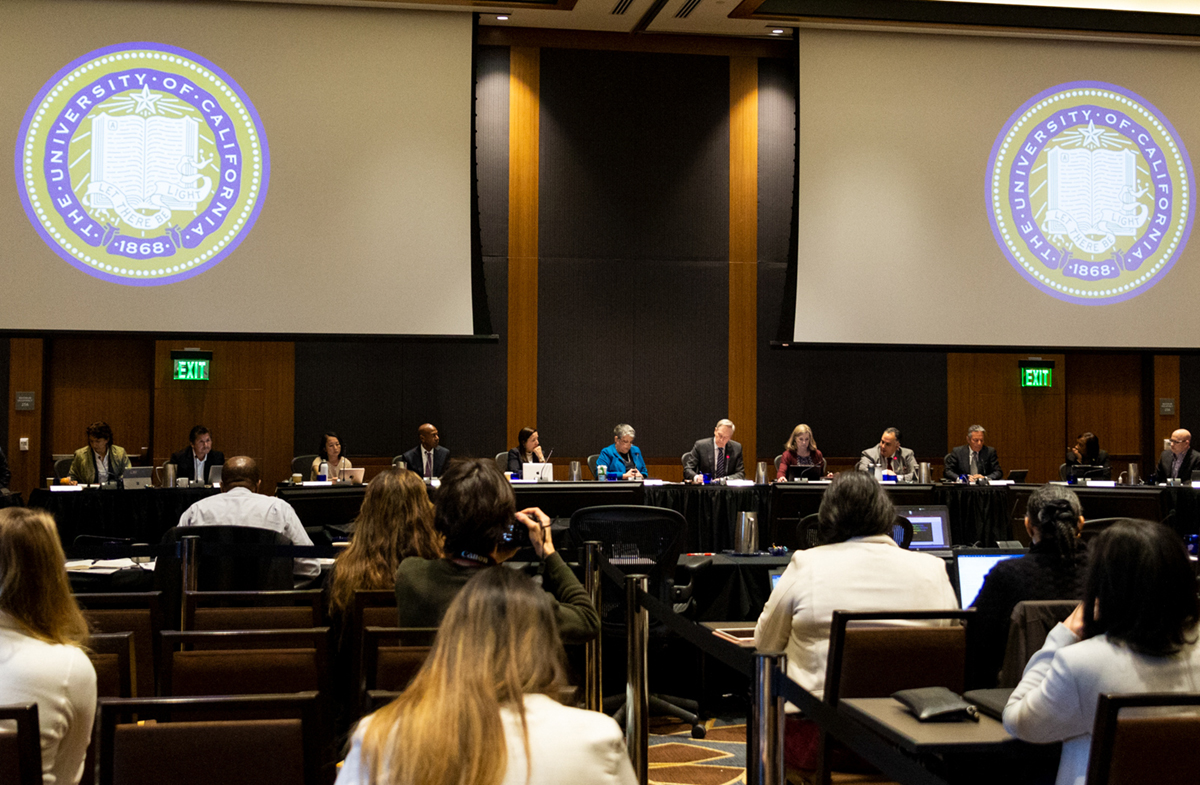 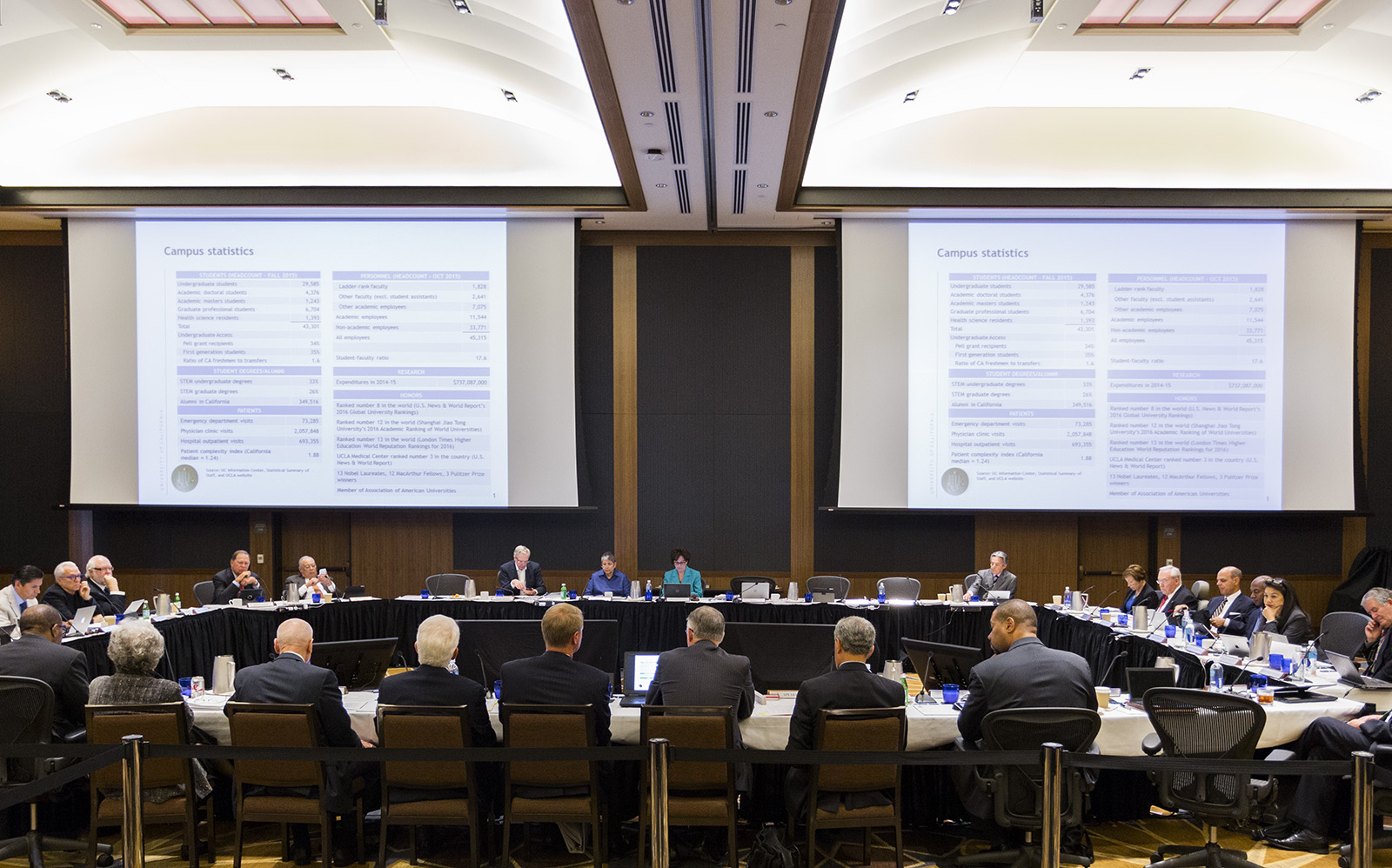