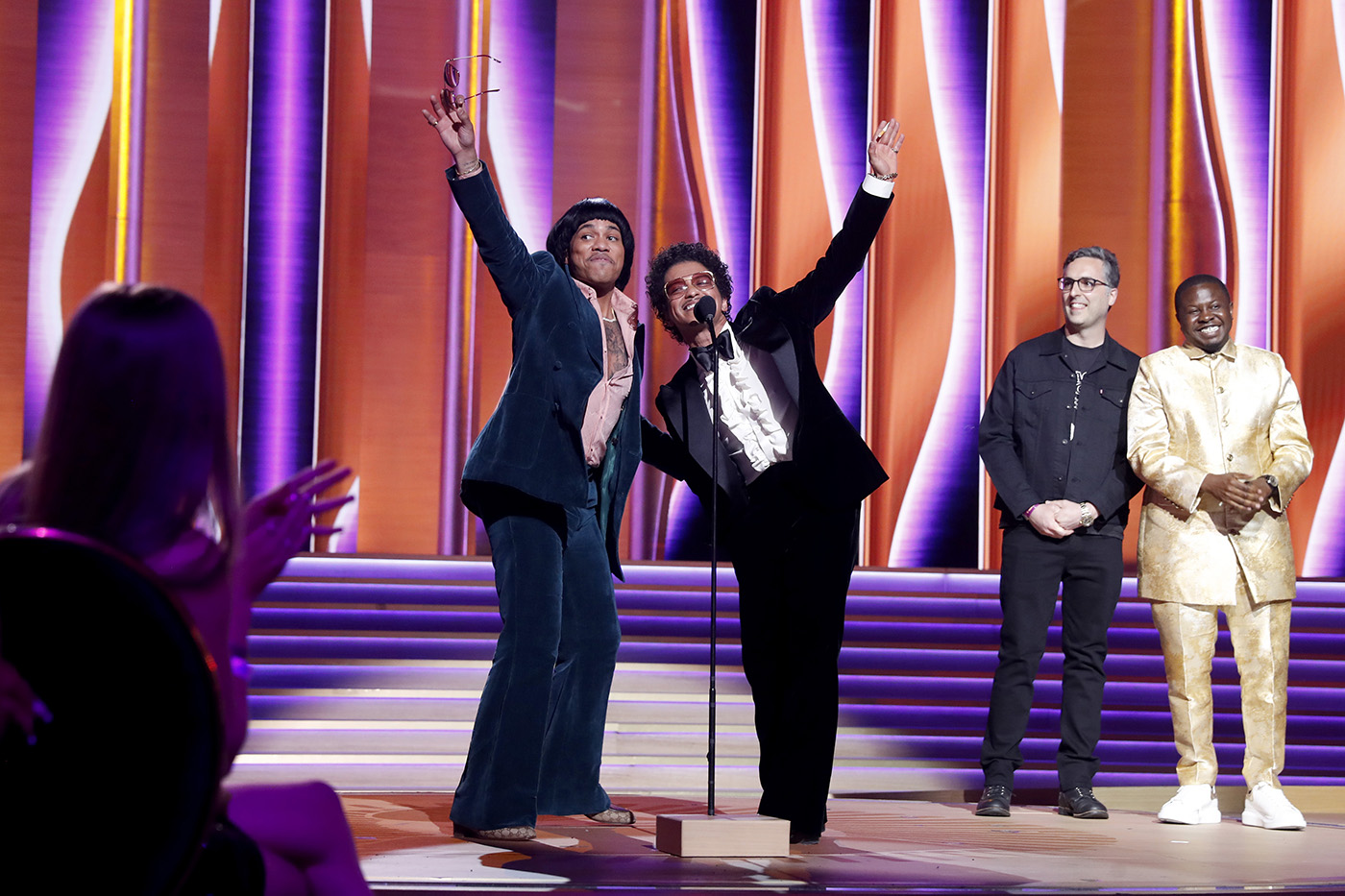 R&B duo Silk Sonic, formed by artists Anderson .Paak (left) and Bruno Mars (right), stand on the MGM Grand Garden Arena stage. Silk Sonic received awards in each category it was nominated in, including record of the year, song of the year, best R&B song and best R&B performance, all for the track “Leave The Door Open.” (Courtesy of Getty Images for The Recording Academy)

The Grammys are embracing all its glitz and glamor, Vegas-style.

After a two-month postponement and relocation, the 64th annual Grammy Awards occurred at the MGM Grand Garden Arena on Sunday. The ceremony welcomed back comedian and host Trevor Noah for a second year, who navigated the event away from potential scandal following last week’s Academy Awards.

“Please remember, guys, tonight is not just about winning. You’re nominated. You might not win, but remember, you have something that not everybody has: money,” Noah said. “I know you want the trophy, but the trophy won’t help you pay for your house. Money, people. Don’t forget what counts in life.”

Olivia Rodrigo was one of the performers who helped kick off the event, tenderly singing “drivers license” on a stage transformed into suburbia, where the young pop artist matched her white Mercedes-Benz with a white ruffled dress while butterflies delicately flitted in the background. Taking the stage next was J Balvin and Argentine singer Maria Becerra, whose joint performance smoothly shifted the tone with “Qué Más Pues?” Emotions and energy were lifted as the duo danced in front of a beaming blue and red screen, with Balvin scaling illuminated stairs while flanked by dancers’ tattooed sleeves.

The first presenter to take the Las Vegas stage was recent Oscar winner and earlier recipient of the best music film Grammy Questlove, who introduced the first of four general field awards: song of the year. Silk Sonic, composed of Bruno Mars and Anderson .Paak, beat out the competition to earn the golden gramophone for its track “Leave The Door Open.” The win followed Silk Sonic’s ceremony-opening performance of “777” in matching white bedazzled outfits with playing card suits trailing down the sleeves, a nod to the signature Las Vegas lifestyle.

Moving away from music creatives, Ukrainian president Volodymyr Zelenskyy made a prerecorded appearance urging the audience and creators to not be quiet, contrasting the silence created by the Russian bombings of Ukrainian cities and the reach musicians can have with their songs. Following the speech, John Legend emerged onstage with “Free,” singing alongside three Ukrainian artists, bandura player Siuzanna Iglidan, singer Mika Newton and poet Lyuba Yakimchuk.

After the political appearances, Lady Gaga performed two songs – “Love For Sale” and “Do I Love You” – without companion singer Tony Bennett, who instead introduced her via video. Following her homage to entertainment’s golden era, alumnus Billy Porter livened the crowd up again with characteristic flair as the presenter for best R&B album, which musician Jazmine Sullivan won for her “Heaux Tales.”

“I wrote this project to deal with my own shame and unforgiveness around some of the decisions that I made in my 20s that weren’t favorable,” Sullivan said. “But what it ended up being was a safe space for Black women to tell their stories – for us to learn from each other, to laugh with each other and not be exploited at the same time.”

In a shift of tone, a spoken and video tribute to drummer Taylor Hawkins of the Foo Fighters, who died on March 25, began a slideshow of those in the music industry who died in the last year. The accompanying music was supplied by Ben Platt, Leslie Odom, Jr., Rachel Zegler and Cynthia Erivo, who performed a medley of some of Stephen Sondheim’s most notable hits, including “Somewhere” from “West Side Story,” honoring the musical theater giant who was among those the industry lost.

Jon Batiste followed up the tribute, traversing a set transformed with minimalist geometric shapes. With Batiste’s pizazz and vibrant costume design, the performance pulled from both the music video for “FREEDOM” and “The Late Show with Stephen Colbert,” where the artist is the bandleader. Retro and space elements combined to create a larger-than-life show for the Grammys’ biggest contender of the night, who landed 11 nominations.

And after an electric guitar-filled performance from H.E.R., Lenny Kravitz and Travis Barker, Keith Urban presented record of the year, which included artists from a variety of genres, such as Brandi Carlile, Billie Eilish and ABBA. Ultimately, it was artist pairing Mars and .Paak who took home the Grammy for “Leave The Door Open,” donning complementary velvet suits and keeping their second acceptance speech short for another general field win of the night.

To close out the ceremony, Kravitz returned, elevating his heeled booties from silver to cheetah print, to present the final award: album of the year. Amid a pool of nine other contenders – the largest in Grammy history – Batiste received his fifth win of the day for “WE ARE,” following earlier nabs that were not televised during the main ceremony. In his acceptance speech, the jazz musician reminded audiences about the core of making music by stating no musician or project can truly be the best but that music instead should be valued for its subjectivity.

“I believe this to my core. There is no best musician, best artist, best dancer, best actor,” Batiste said. “It’s like a song or an album is made and it almost has a radar to find the person when they need it the most.” 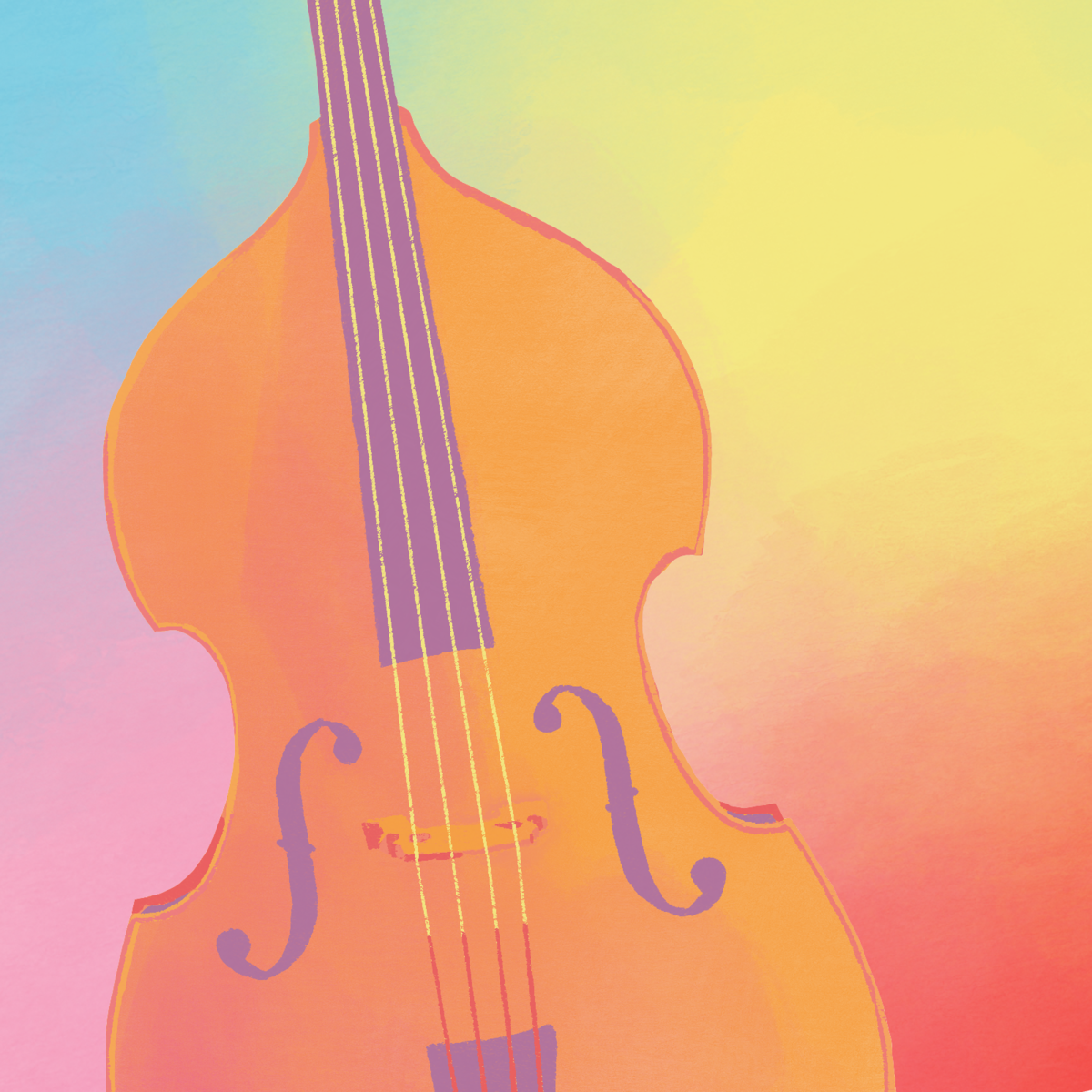 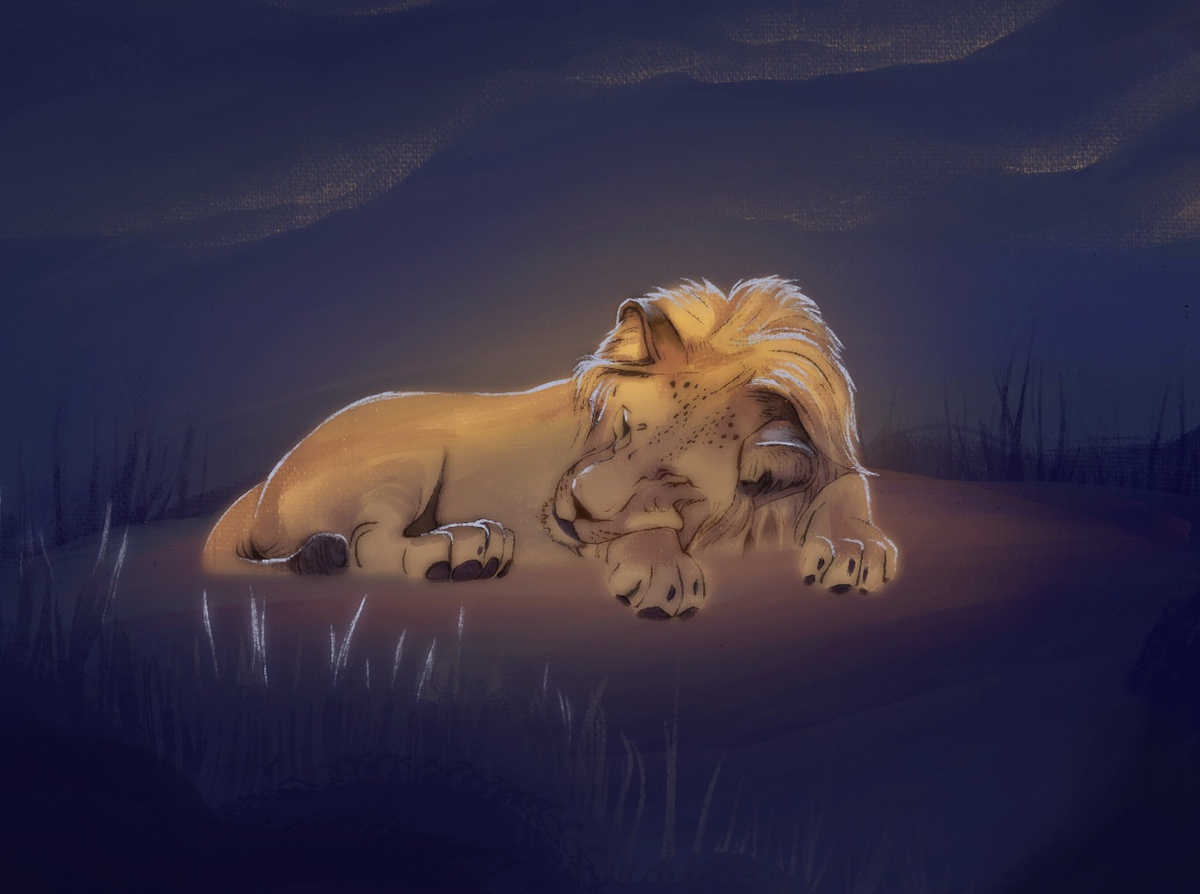 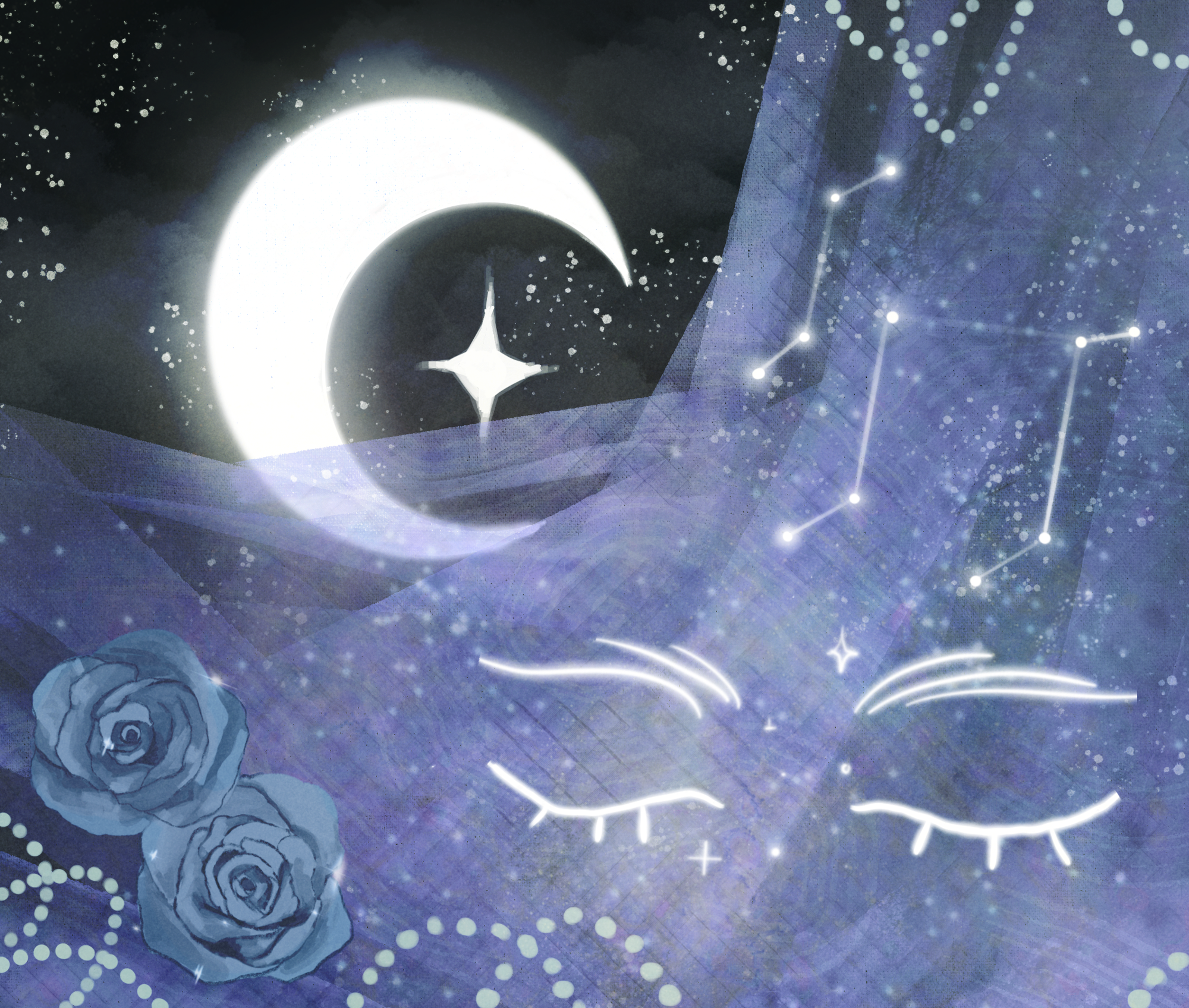 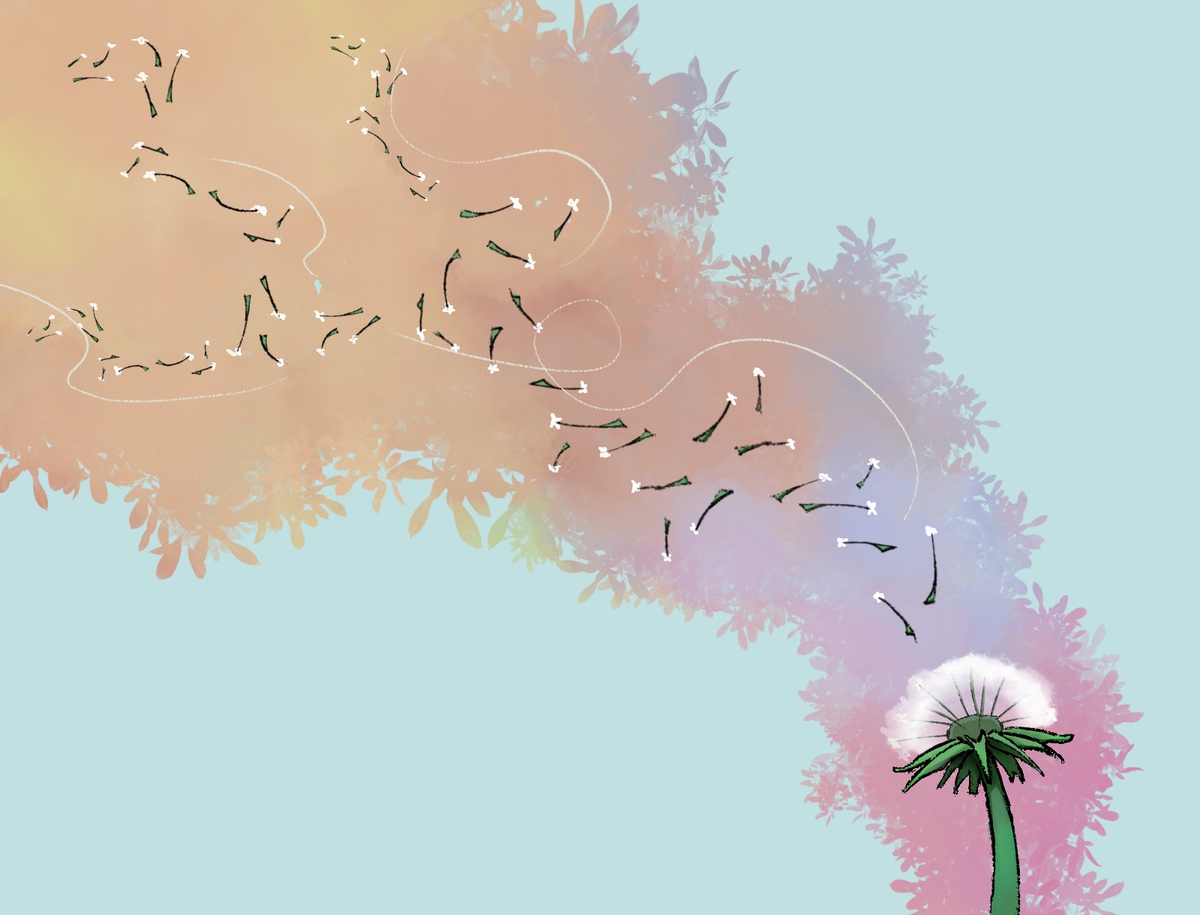