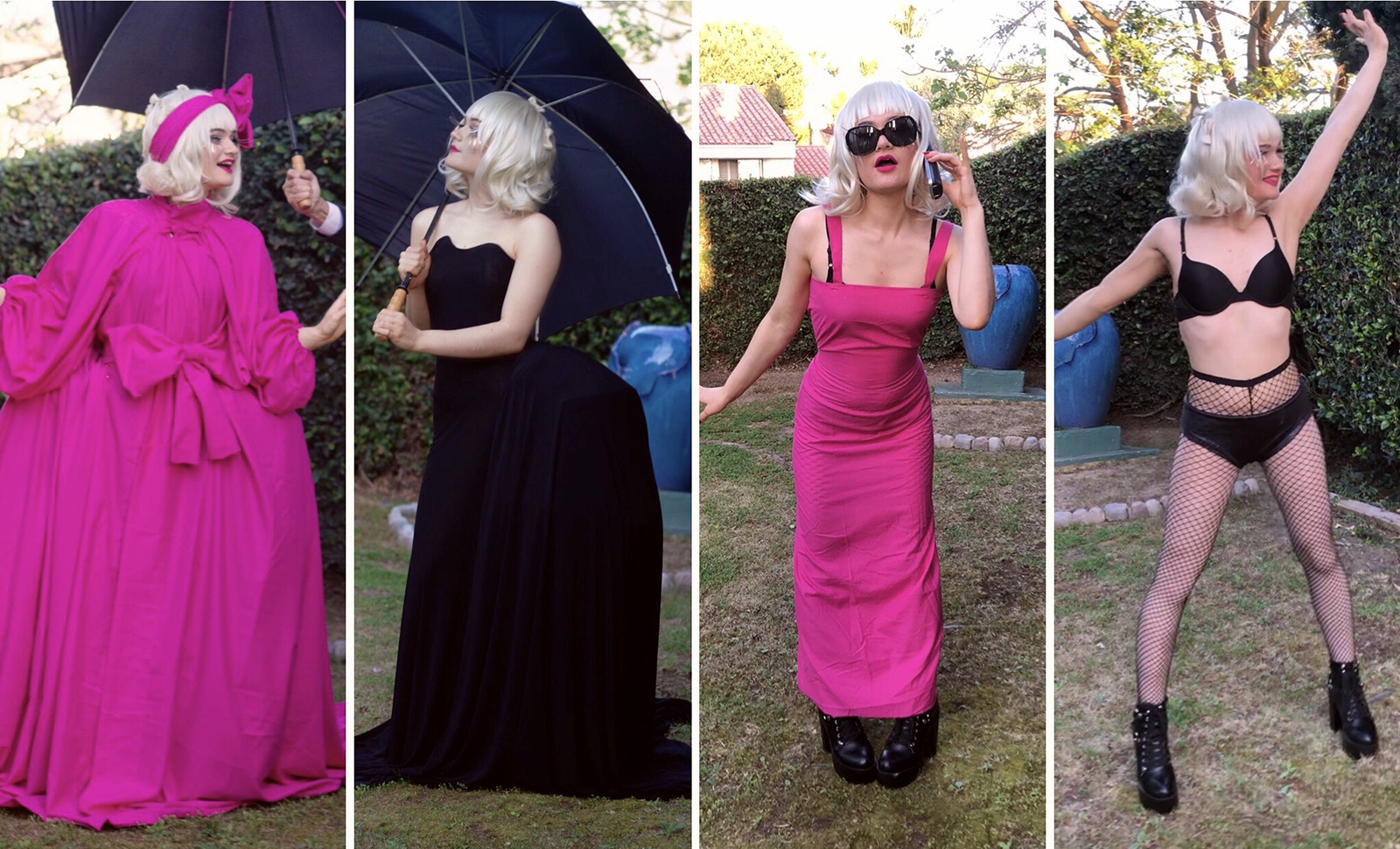 Third-year communication student and cosplayer Shay Rose took part in the #MetGalaChallenge to recreate all four of Lady Gaga’s 2019 Met Gala looks. In one week, Rose constructed a voluminous pink dress, a black dress with a bustle, a pink fitted dress and black lingerie. (Courtesy of Shay Rose)

Using materials found around the house, cosplayer and third-year communication student Shay Rose reconstructed Lady Gaga’s four-layered outfit from the 2019 Met Gala for the digital #MetGalaChallenge on Instagram. The garments not only mimicked the look of the outfit, but also included quick-change features that allowed Rose to replicate Gaga’s rapid red carpet transformation. The extravagant look was just the latest project for Rose, who has continued to design and create costumes at home despite the challenges of balancing school work and material constraints.

“It was totally up my alley,” Rose said. “(Lady Gaga’s look) is the (most fun). It’s not just one look, it’s four of them, and they’re all so unique and fun in their own way.”

The #MetGalaChallenge was created by Vogue and Billy Porter once it was clear that the 2020 Met Gala was canceled as a result of COVID-19, said Maria Kozanecka, production coordinator at the Metropolitan Museum of Art. The hashtag offered online creators the chance to showcase their re-creations of looks from past galas. Kozanecka said the challenge was a fitting complement to the planned 2020 theme “About Time: Fashion and Duration” because it allows participants to look back at past outfits that stood the test of time.

[Related: 2019 Met Gala: Styles that embodied camp, ones that failed to meet the mark]

Rose said she heard about the challenge from a friend who participated and chose Lady Gaga’s look from last year’s camp-themed gala, a theme rooted in LGBTQ+ culture and characterized by aesthetic spectacle and exaggeration. Gaga stepped onto the red carpet wearing a voluminous pink dress but removed clothes as she walked up the carpet, creating three more distinct looks in the span of about 15 minutes – a black dress with a bustle, a pink fitted dress and black lingerie. Rose said Gaga’s transformative appearance was the most feasible to make with supplies from around her house, given that she typically shops in small businesses in the Fashion District that have temporarily closed.

lady gaga at the met gala: at home edition ✨ feat my dad as the umbrella helper in a suit and my mom as the camera person :D (they are the real mvps here 😤💕) . . but this is my official entry for @voguemagazine ‘s #metgalachallenge! The goal was to recreate iconic met gala looks at home, and this is my take on @brandonmaxwell ‘s design for @ladygaga – feat. pink bedsheets, laudrybaskets, my black photo backdrop, and other clothes i had around the house! . . (sorry there is no part 2 showing the making of the pink coat! Midterms are currently kicking my butt, so i had to rush this project a bit, and that meant no time to film and edit part 2 😅 but nevertheless, i really wanted to get it done, and I’m glad i was able to! its not exactly my best work, but it was a fun challenge! :) ✨ . . Materials for this look were: – and old laundry bin – Carboard – Fanny pack – Scrap black fabric & muslin – Zip ties – old photo backdrop – a lot of hot glue/thread/pins – Pink bedsheets – clothes/accessories from around the house – and my blonde lio (promare) wig haha . . I know this isn’t like my normal style of project, but thank you all so much for coming along for the ride! . . . . #metgala #diy #diyfashion #fashion #cosplay #cosplaywip #crescentshay #recycledfashion #redcarpet #fashiondress #ladygaga #ladygagacosplay #redcarpetdress #eveningdress #historicalcostuming

To start the project, Rose said she broke down each of the four costumes into the material components she would need and listed out all the steps to make each garment. Though Rose often thinks outside of the box in terms of fabrication, the challenge pushed her outside-the-box design process, said friend and fellow cosplayer Vanessa Fano.

“She really got good results with fabrics that she usually doesn’t ever use,” Fano said. “Because … she usually goes to the Fashion District, she usually has patterns already set out, but this was one of those where she kind of made her own thing entirely just with household supplies.”

After that, Rose started building the undergarments and understructures of the look, specifically focusing on the exaggerated hip pieces of the first dress. Rose then searched her house looking for materials with the right shape, eventually finding the laundry basket and cutting it in half to place on either side of her hips, she said.

The laundry basket wasn’t the only household item Rose transformed into high fashion. Originally, she had planned to make the second layer – a black ballgown – using trash bags but found the material difficult to work with and had to rethink her approach.

“There was a point where I was just stuck a little bit because I couldn’t find the right material,” Rose said. “Then I again wandered around my house, looking for whatever was black, and then I saw my old photo backdrop. … I eventually just sacrificed it for the cause.”

Timing also posed an obstacle for Rose – the challenge was announced April 22 and submissions were due by May 3, right in the middle of Rose’s midterm season. The time crunch meant Rose had to split her attention between studying and designing, eventually completing the full look in just a week.

To display the outfit, Rose planned a backyard photoshoot with creative substitutes for her paparazzi and entourage. While her mom filmed and photographed, her dad donned a suit and helped her with her costume changes, emulating Gaga’s umbrella-wielding crew that assisted her on the Met Gala red carpet.

After Rose posted the outfit online, it quickly caught the attention of both Vogue and The Metropolitan Museum of Art, which featured Rose’s work on their websites as one of their favorite looks from the challenge. Kozanecka, who curated The Met’s article, said she focused her attention on the process that creators put into their looks, as well as the level of detail, accuracy and ingenuity.

“(Creators) were getting hands-on and finding an expressiveness about the item of clothing and the person who was wearing it, really bringing it to life,” Kozanecka said. “What stood out (for Rose) was her sense of performance. She took it an extra level where it wasn’t about just recreating a performance, but recreating a mood.”

Rose said she was thrilled with the online reactions because she loves when people are as excited about her work as she is. Now that the Gaga look is complete, Rose is continuing to work on other costumes, including the aerial outfit worn by Zendaya’s character in “The Greatest Showman.” With each of her projects, Rose said she picks the costumes she recreates based on her personal reaction to the look, working to make it a reality.

“’The Greatest Showman’ one, actually that’s one of my favorite costumes because I do aerial silks,” Rose said. “So for that one, I’m probably going to plan a little aerial routine. It’s just whatever I want to make, I just make it.”