The Quad: For seniors, an online spring quarter means an incomplete college experience 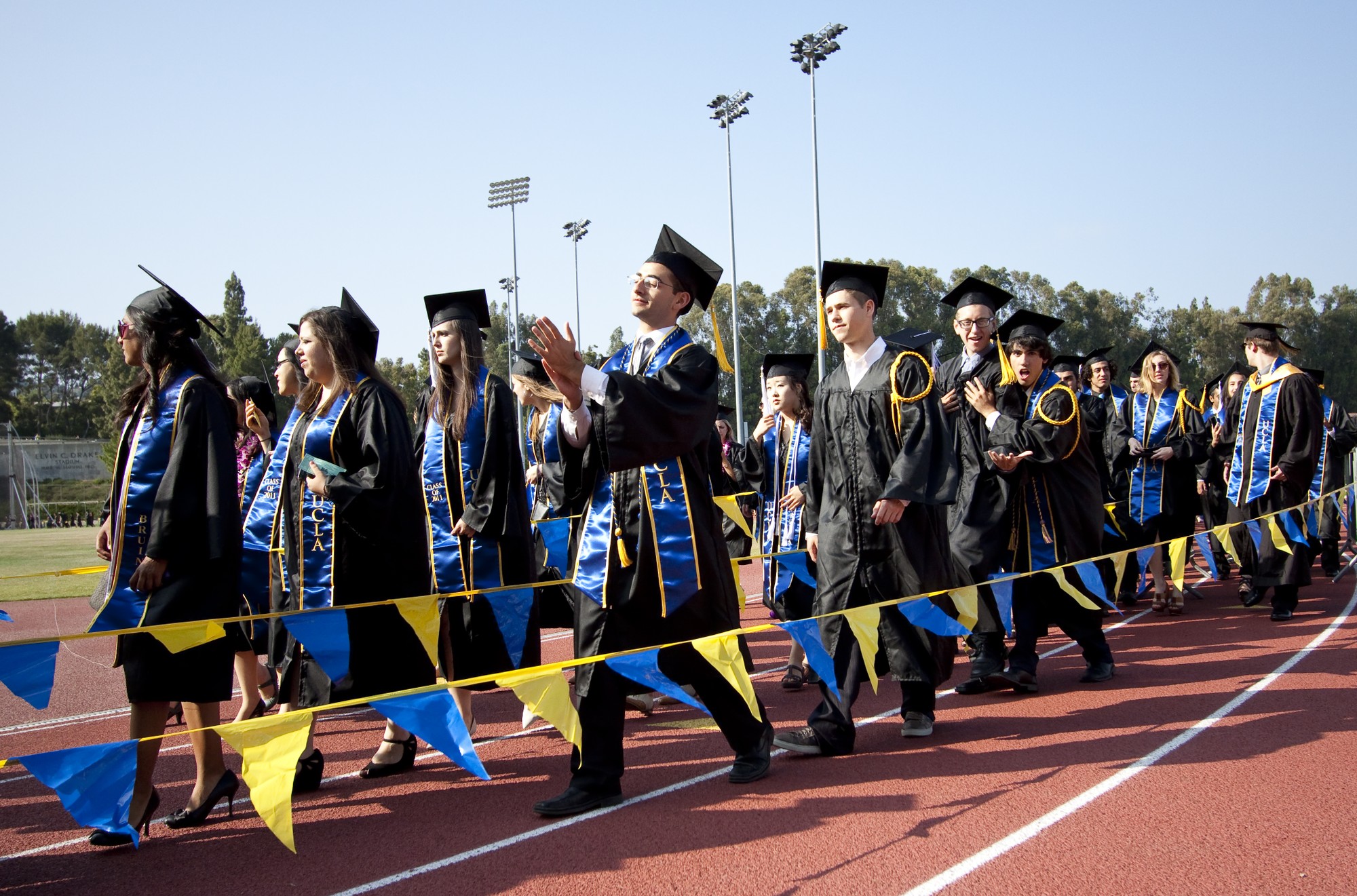 It really, really sucks. There isn’t any other way to put it.

UCLA officials announced Friday that spring quarter classes would be conducted entirely online in response to widespread cases of the novel coronavirus. Students were encouraged to return to their homes for the remainder of the academic year.

In a matter of hours, UCLA seniors bid farewell to their college careers three months too soon. Out went graduation photo shoots, Bella Pita and Fat Sal’s Deli runs, or any chance to bathe in the Inverted Fountain.

There is no one to blame, really, for the situation. California currently has 335 cases of the novel coronavirus. Testing kits are nowhere to be found and the pasta aisle in Trader Joe’s is remarkably empty.

The school’s actions in the middle of a pandemic are nothing short of necessary.

But that doesn’t mean it doesn’t hurt.

I raced out of Royce Hall on Monday evening, eager to sink into my living room couch. I didn’t know that lecture would be the last in-person class I would attend at UCLA.

Maybe then, I would have taken note of the creaking fold-over desks in the lecture halls. Or the particular angle I’ve perfected over the past four years guaranteeing the most comfortable note-taking position. I probably would have stared at the historic brick buildings a little bit longer, maybe counted the steps down Bruin Walk.

The same path I’ve walked through hundreds of times – headphones in, eyes glazed – is perhaps out of reach. Who knows if this pandemic will get worse, and it could be months before I ever return to Westwood.

Some students have already packed their bags and left campus for good. When UCLA initially announced that the first two weeks of spring quarter would be held remotely, some students made travel arrangements instantly.

For fourth-year international development studies student Mina Naziri, these friends were gone for good once the remainder of spring quarter classes would also be taught online.

To make matters worse, goodbyes are easier when they’re tagged with “see you again.” In these unprecedented circumstances, however, no one really knows what will happen tomorrow. Or next week.

For me, at least, I simply don’t know when I’m coming back to Los Angeles after spring break. Without work or in-person classes, I have no concrete reason to be in Westwood. My only rationale for spending the quarter on these cracked, hilly streets would be because I missed my friends.

And then there’s the rent I still have to pay.

Adieu aside, the most tragic part about this situation is the robbed experiences. Danny Robertson, a fourth-year history and sociology student, said that his last quarter at UCLA just doesn’t exist without campus life itself.

“We’re not meeting professors, not interacting with students, not going to campus. I never even finished my last lecture – I fell asleep in it,” Robertson said.

The preformed memories I had spent daydreaming of for the past year vanished. Since I first stepped onto campus my freshman year, I dreamed of walking into commencement, drunk off the future’s adrenaline with my friends. I had always previewed different graduation cap decoration ideas in my head.

In the end I had decided on this: I would use a copy of the Daily Bruin as the cap’s base. Then, I’d write “Cảm ơn bố mẹ.”

It means “Thank you, Mom and Dad” in Vietnamese.

I’ve always had a photo of my dad at his college graduation on my bedroom wall. He said that he never saw my grandmother happier than on his graduation day.

I can only dream of how happy he would have been at mine.

I’m not sure whether UCLA will cancel graduation yet. UC Irvine already canceled commencement ceremonies, and we may very well be next. In the meantime, hope is a meager virtue propelling me through my day.

What’s happening is nerve-wracking, depressing and undeniably historic. But, this shared suffering serves as a reminder of our humanity. There’s some comfort in knowing that what I’m feeling reverberates among 7,000 other seniors as well.

“This isn’t the last time you’re seeing me, stupid!” See you on zoom. I love you all.

Luke Cooper, a fourth-year history student, said that, despite a difficult first quarter, he eventually found a home at UCLA.

“I made roots here. A part of me loves LA now, and UCLA and Westwood. I thought I had at least one more quarter to say goodbye. From one email, all that is done,” Cooper said.

I, too, made my roots in this town. I found lifelong friends, like the type that my kids would call “Aunt” and “Uncle.” I built my career. And most importantly, I learned to be me.

A part of me isn’t sure if I regret not staring at Royce long enough and appreciating its unparalleled grandeur. An hour before sunset, when Royce quad is brimming with students bustling in and out of Powell Library, and to and from class, it’s as if Royce is alive. And if you walk through its iconic archways, you’ll find the sun, beaming through the brick. It’s golden, it’s beautiful. And I’ve never failed to whisper to myself, “I’m so lucky to be here.”

Here’s to climbing on the Bruin Bear – which is way harder than it looks – in the middle of the night, laughing at the top of our lungs like we’re the only ones who could possibly be there. Here’s to marveling at the twinkling city lights that seemed as if they bid hello atop a Midvale apartment complex. Here’s to mediocre Rendezvous boba that costs a full swipe, and to the inexplicable, uplifting camaraderie circling these halls.

They said college would be the best four years of your life.

And they were right. Minus about half the year.