The Quad: Boiling down the bagel’s beginnings before it was a Bruin’s breakfast 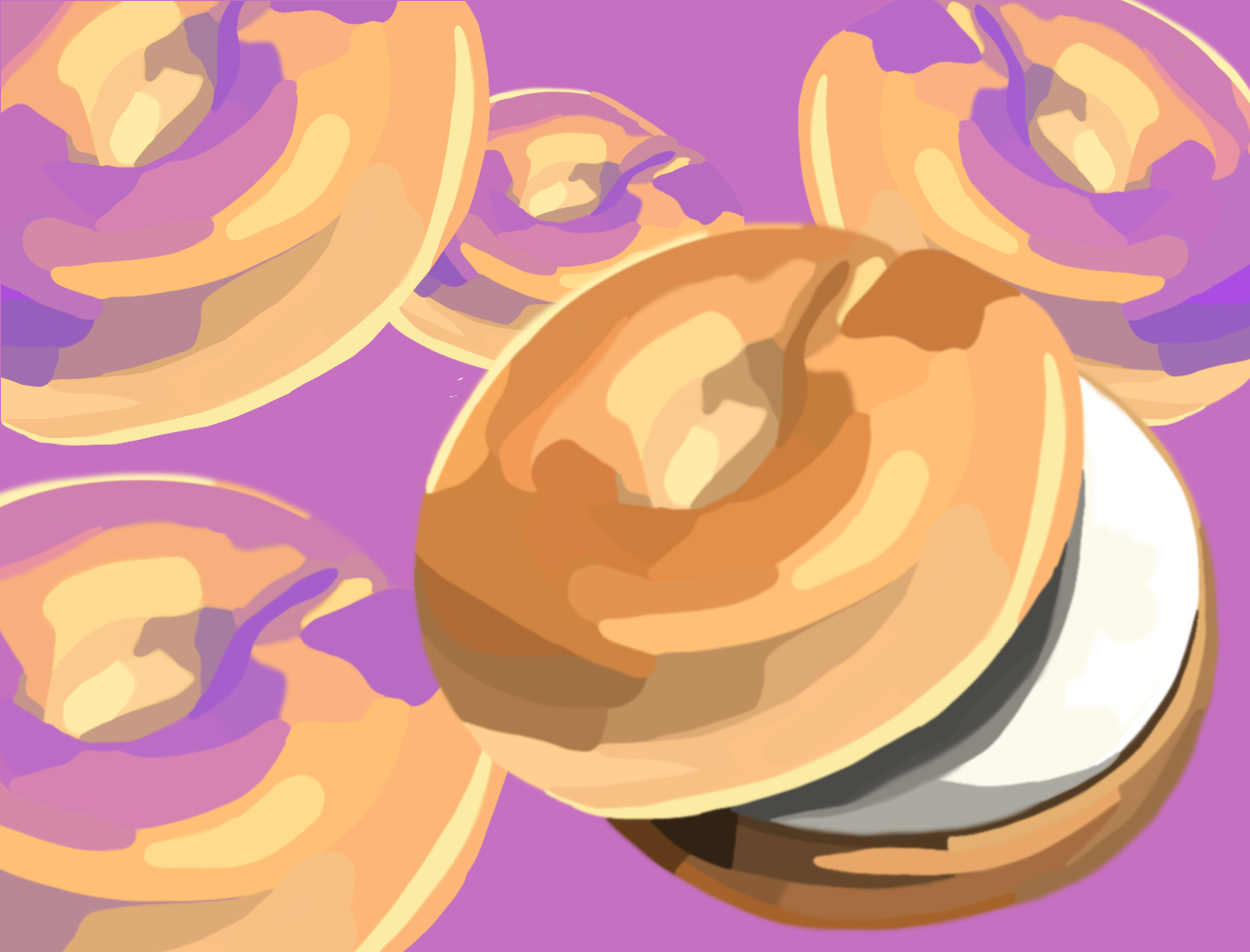 The original version of this post misspelled Maria Balinska's name.

From the shtetls of Eastern Europe to The Study at Hedrick, the bagel has come a long way over its centurieslong history – about 6,000 miles, actually.

Of course, it’s the quintessential breakfast item these days – customizable, build-your-own bagel sandwiches like the ones at The Study make for a quick and easy on-the-go morning meal for when you’re running late for the 9 a.m. discussion in Bunche Hall that you’ve been dreading all week.

But before the everything bagel, decked out with avocado cream cheese spread and Kalamata olives – so LA, by the way – was even on people’s minds, the bagel was a sort of everyman’s food, a staple of Polish-Jewish culture and cuisine.

A distant relative of the pretzel, bagels are bread with a particularly distinctive cooking process in which the dough is boiled prior to baking, giving the circular loop of dough a characteristically chewy interior. Here, The Quad explores the bagel’s rich history, giving context for how the bread product has transformed over the years and made its way into American cuisine as a staple breakfast food.

While we think of pretzels and bagels as inherently different food items these days – one a stiff and somewhat bland snack item coated in salt, the other a satisfying and chewy carb-based vessel for toppings like cream cheese or hummus – the two were actually not all that distinct from each other back during the Middle Ages in Europe.

Bagel historian and author Maria Balinska surmises a number of different bagel origin stories in her book “The Bagel: The Surprising History of a Modest Bread,” the most interesting of which being that they were first introduced to Poland during a period of increased German immigration to the region. Pretzels have an even longer history than bagels, having been produced in Catholic monasteries since the seventh century – the characteristic, twisted shape of the pretzel is actually meant to resemble a child with his arms crossed in prayer, but that’s a story for a different article.

When the pretzel made its way to Poland, Balinska argues that it quickly evolved into the round, donut-shaped roll that we know it as today – in Polish, this proto-bagel is known as “obwarzanek,” and can still be found on the streets of Polish cities today. At first glance, obwarzanek might be indistinguishable from the American bagel, but there are a couple of major differences.

Obwarzanek are larger and wider, with the hole in the center serving almost as a handle; additionally, you won’t find an everything obwarzanek or one with chocolate chips twisted into the dough – these pastries are typically topped off with a sprinkling of poppy seeds only. According to The Atlantic, written records of the obwarzanek go back all the way to the 14th century. It’s similar to other bagel cousins that developed in Eastern Europe, like the Russian and Ukrainian bublik, another hand-held, circular bread roll that’s boiled before baking.

The bagel, on the other hand, did not enter the written record until 1610, according to Balinska. The bagel appeared in a number of Jewish “sumptuary laws,” written by rabbis to mandate just what kinds of foods and other private expenditures could be enjoyed by specific households and individuals. In the case of the bagel, it was primarily meant as an indulgent treat to enjoy at the circumcision celebrations for a baby boy, according to Balinska; other scholars like Leo Rosten note that the sumptuary laws allow for bagels to serve as a gift for women in childbirth.

Among a number of other anti-Semitic restrictions that European Christians had put on European Jewish life in the Middle Ages, Jews in Poland were banned from baking bread. Balinska notes that laws enacted from 800 C.E. to 900 C.E. explicitly banned Jewish individuals from baking bread in an oven, while later mandates declared that only members of the Krakow bakers’ guild, who were typically gentile, could produce white bread.

In part, the bagel became largely associated with Jewish culture because boiling bread before toasting it served as a loophole to get around the laws that banned Jews in Poland from baking bread. The bagel was thus born out of necessity – it was Jewish cuisine’s take on the obwarzanek, but it was also one of the only ways Jewish people could legally produce their own breads.

The bagel remained a stronghold of Polish-Jewish cuisine throughout the following centuries. During the 19th century, Jewish immigration to the United States increased significantly as a result of political upheaval in Europe. A large number of these immigrants settled in New York City – perhaps the American city most closely associated with bagels – bringing their cuisine along with them.

Bagel production became such a major market among local Jewish communities that bagel bakers formed a union in New York City called the Bagel Bakers Local 338. However, bagel consumption was largely limited to Jewish communities until the 1970s, according to Smithsonian Magazine.

If you’ve ever eaten a store-bought bagel or warmed up a frozen one, chances are you might have eaten one from Lender’s Bagels. The Lender family began producing bagels in local markets during the 1920s, but with the advent of television advertising, their line of frozen bagels became a hit across the country in the ’70s, when they marketed them as the “Jewish English muffin.” It also probably helped that their commercials had an enticingly kitschy aesthetic, adopting the cheesy slogan “First You Crave… Then You Rave.”

The rest is history – as a result of Lender’s popularity, bagels entered the mainstream and never looked back. In Los Angeles, bagel shops can be found all across the city, from The Bagel Broker in the Fairfax District to Belle’s Bagels by Highland Park. Oh, and put The Study at Hedrick on that list.