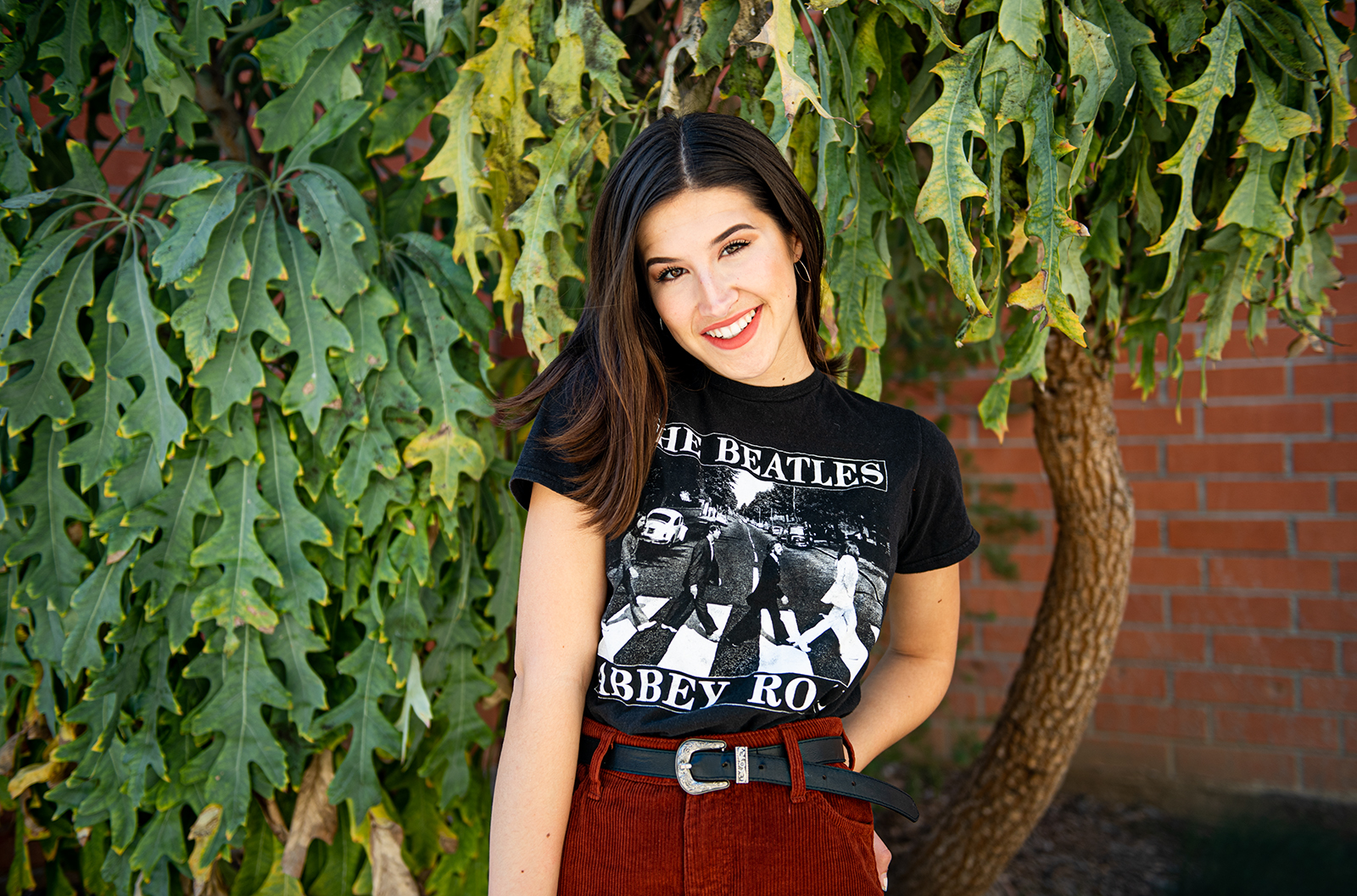 Second-year global jazz studies student Sophia Wackerman auditioned for “American Idol” after receiving a direct message from the show’s producer who had taken interest in the videos Wackerman had posted of herself singing. She said being surrounded by music at a young age, since her father is a drummer and her late mother was a singer, inspired her to pursue singing professionally. (Anika Chakrabarti/Daily Bruin)

A hopeful Bruin voice found herself auditioning for “American Idol” after posting her singing videos on social media.

Among the many contestants who auditioned for the latest season of the singing competition is second-year global jazz studies student Sophia Wackerman. Growing up, Wackerman said she was constantly surrounded by music. Her father is a drummer and her late mother was a singer, which she said sparked her joy for singing early on, and she joined orchestras and show choir throughout junior high and high school. Wackerman said she was invited to audition for “American Idol” after receiving a direct message from a producer of the show, who expressed interest in the videos she posted of herself singing. After she auditioned, she received a golden ticket from the judges, making it through to Hollywood week.

“It was crazy, like absolutely wild,” Wackerman said. “Getting to perform in front of Katy Perry, Lionel Richie and Luke Bryan just because they’re such giants in the music industry, and I’ve been such a fan of them for so long.”

Outside of the actual performance, Wackerman said the audition day involved interviews in which she was asked questions such as why she got involved in music and what she hoped to gain from competing. She said the interviews would become repetitive and confusing at times, which required her to quickly learn to be more coherent in her responses. Learning to word her responses well and overcoming nerves that jumbled her thoughts were important for her to tell her story as clearly and honestly as possible, Wackerman said.

The singer said throughout the audition process she was able to apply professionalism skills she has learned from her education. Especially during her interviews and while she interacted with the judges, Wackerman said she was able to contain her enthusiasm and present herself professionally because of how she has been trained to be when pursuing her career. On top of that, the emphasis on collaboration over competition in UCLA’s jazz program taught her to focus more on learning from, rather than competing with, others during her audition, Wackerman said.

“Going into the competition, I really had the mindset of knowing I’m only going to get better from being around these other talented musicians,” Wackerman said. “I just would kind of go with the flow and try to soak up all the knowledge that I could.”

Wackerman auditioned for the show alongside her roommate, third-year human biology and society student Sarah Isen. Isen said participating in the same competition didn’t feel blatantly competitive, but there was an air of healthy jealousy that is to be expected in a widely known show. However, the competition didn’t cause issues in their relationship, she said, but actually made the two stronger as friends.

“There are a lot of nuanced feelings that come with being a part of something like this,” Isen said. “So it’s just a matter of learning how to navigate those types of intricate feelings, but we’ve been successful at it so far. We’re still best friends.”

She also said there were many technical skills she learned from the audition. Isen said she was given more useful and applicable singing advice from the celebrity judges than she expected. She said about five to 10 minutes of each audition is cut out from the portion aired on TV, and in those cut sections there were many thought-out notes from the judges that audiences couldn’t see.

[Related: Headliners: Michael Palermo strums his way into the music industry with a ukulele]

Wackerman said the show could be a useful platform for up-and-coming singers to gain exposure and learn to grow in their craft. The competition gives artists high-caliber performance experience as well, especially for those who make it far enough to perform on giant stages with a full band, she said.

While she was able to use the skills she learned from her education on her audition day, Wackerman said she gained a new level of confidence from the audition as well. She said she struggled with believing in her own worth and capabilities as a musician, but she learned how important it is to believe in oneself when entering any kind of competition or show.

“There’s something really validating in just telling yourself you can do it, and you are worthy of being in the position that you are right now,” Wackerman said.

Wackerman said someone who has been a big inspiration in her musical career is her current vocal teacher, adjunct professor Michele Weir, who said competing in musical competitions or shows such as “American Idol” can help artists push themselves to be the best they can be. In turn, such shows can be extremely demanding for those who make it to the final rounds, as student competitors often face the challenge of balancing schoolwork with the show’s responsibilities, Weir said.

Auditioning for the show provided her a taste of what a high-intensity musical competition was like, Wackerman said. In her future career as a musician, she said her dream is to become a recording artist and tour the world with records she writes herself.

However, she recognizes how competitive the music industry is and holds a sense of realism over her future as well, Wackerman said.

“Just to do the whole artist thing would be the dream,” Wackerman said. “But I think as long as I’m doing music in some way, shape or form in the future, I’ll be happy.”