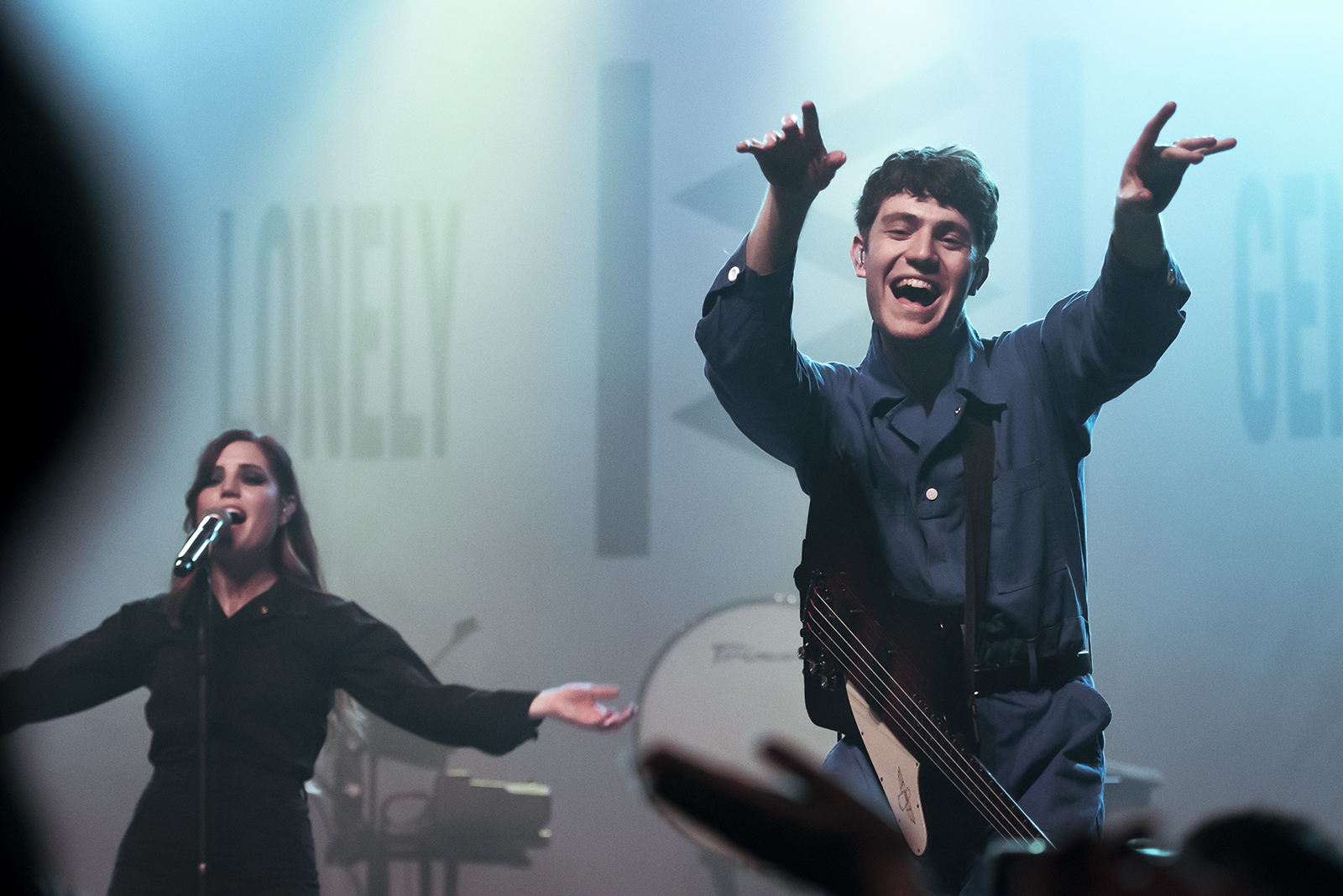 Siblings Sydney and Noah Sierota, better known as two-thirds of Echosmith, took to the stage of The Fonda Theatre on Thursday night. The performance was a mixture of upbeat excitement and tender familial moments which combined to show the band’s true strength – creating unity through its music, writes columnist Jessica Li. (Alex Driscoll/Daily Bruin)

If any artist can hit the audience in the feels then start a dance party in the span of about two seconds, it’s Echosmith.

After releasing its sophomore album earlier this year, the sibling-trio band finished “The Lonely Generation Tour” in its hometown of Los Angeles at The Fonda Theatre on Thursday night. The band filled the intimate venue with high energy and emotion as it weaved together songs new and old, acoustic and electropop, to engage the crowd.

The night opened with a slow start with first opener Jayden Bartels, who sang to ukulele acoustics backed by guitar in a relatively uneventful performance. Bartels’ set, however, was far from representative of the rest of the show. The audience’s liveliness increased dramatically once the second opener of the night, Weathers, took the stage. Not needing any introduction, the band immediately sent reverbing vibrations through the floor, effectively hyping up the crowd for Echosmith’s entrance.

The upbeat energy continued as the lights came back on and each member of Echosmith took the floor. Once bassist and vocalist Noah Sierota appeared to the tune of a guitar riff and lead singer Sydney Sierota strolled in, the band threw out clear balls of confetti to be tossed into the crowd. Sydney jumped immediately into “Love You Better” as she effortlessly popped the balls of confetti and streamers surrounded both her and the crowd.

The band banked on its opener’s high spirits for the first few songs, including “Lost Somebody” – another lively song featuring tambourines and clapping. Coming down from the song’s vivacity, Sydney took a break to greet the audience. Despite opening with Echosmith’s fast-paced songs, the beginning of the set conveyed an imperfect and incomplete snapshot of the best of the band’s talent. Although the stage was brimming with excitement and bright, changing lights, the set’s continuous booming background instrumentals drowned out many of Sydney and Noah’s vocals.

The loud backgrounds didn’t last long, however. It was a welcome and appropriate shift when the band decided to switch gears to play its acoustic-leaning songs. Sydney called for flashlights and lighters to illuminate the crowd alongside the lavender backdrop of the stage while she sang one of the band’s biggest hits, “Bright.” The track provided the perfect transition into the next set of songs, all expressing the band’s vulnerability to its fans.

Sydney prefaced the subsequent songs by mentioning the pressure of the music industry to constantly produce music, no matter its quality. For “Everyone Cries,” she and Noah conveyed the family’s strong emotional connection to the audience through the song in a duet backed by their dad on the piano.

Further establishing an attitude of openness with the audience, Sydney followed the familial moment with a mashup of similarly sentimental songs “Follow You” and “Tell Her You Love Her.” As she donned an acoustic guitar, blue lights appropriately refocused the spotlight on just her until the end of the song, when the band gradually reincorporated the drums, guitar and bass. It was perhaps the best part of Echosmith’s performance, and the band’s forte: stripping down its instrumentals to connect with fans on a deeper level through raw emotion.

Sydney then danced off, carrying a blue umbrella, to the fast drumbeat and guitar solos of “Talking Dreams” and used the built-up excitement to formally introduce each band member to the crowd. It was a period of pure joy expressed by the band as each member performed their respective introductory solos, with a highlight being Noah showcasing a dance move he used to frequently do in elementary school.

As Echosmith drifted into “Stuck,” each member took a corner of the stage to play their own drum sequence. Continuing its consistent drumming with an addition of moving background lights, Echosmith chose “Lonely Generation” as its second-to-last song of the night. The lyrics’ commentary on modern society stood out from previous ones focused more on personal topics, even though the song was similar in sound to others it performed earlier.

The show ended on a similar note, with the band’s most popular song “Cool Kids,” dedicated to all the outcasts. The confetti balls made an appearance once again as the opening acts returned to the stage, marking the end to the night and the tour overall.

After promising to perform more shows soon, Sydney hit fans with one final message: to know that they are loved. The message, emblematic of the overall show, captured the band’s ultimate intentions and hopes. Albeit not always perfectly executed, the show clearly reflected that what matters at the end of the day is unity through music.