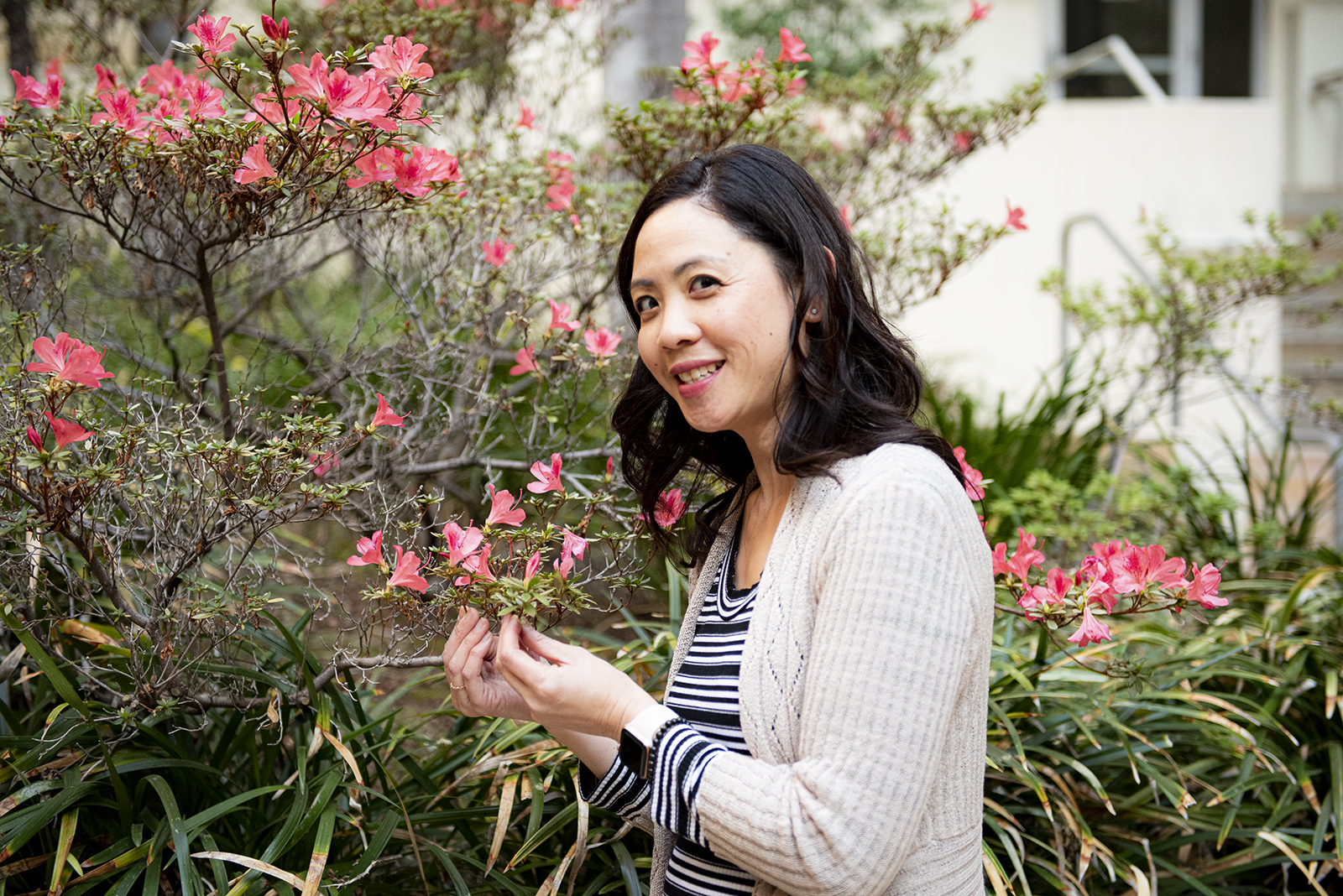 Laurie Leyden, the current student affairs officer in UCLA’s Statistics department, runs her personal blog “Life Lessons with Laurie” on the side. She said she was inspired to do so after two years counseling students and wanting to find something more meaningful to pursue outside of UCLA. (Sophie Marencik/Daily Bruin)

Laurie Leyden is an academic counselor by day, but runs a blog for personalized life advice by night.

As the student affairs officer of UCLA’s statistics department, Leyden assists both undergraduate and graduate students pursuing careers within statistics, advising on majors and helping students enroll in classes. However, the counselor found herself looking for something more meaningful after her first two years of working at UCLA. In November, Leyden started a blog called “Life Lessons with Laurie” after encountering students who came into her office hours to speak to her on a more personal level.

The first student Leyden helped in her capacity as a statistics counselor came into her office crying about a death in her family.

“I had referred her to Counseling and Psychological Services, but she came back the following day saying that she’d rather talk to me,” Leyden said. “I can’t speak for how she was treated, but the only feedback she gave me was that when she went to CAPS, she felt that it was rushed.”

Because the statistics department has grown so much within the past few years, she felt that there was a growing need to help students regarding issues that weren’t purely academic, Leyden said. After the first two years of serving as an academic advisor, Leyden said she finally started her own blog.

“Even though it’s only a handful who are troubled and want to talk, it was enough for me to finally ask, ‘What can I do?’” Leyden said. “I saw that Blogspot was free, and it was more for me to do something when I had time.”

For instance, in Leyden’s blog post titled “Relationships,” she was asked, “Do I have a right to be upset at someone who led me on?” She asks the readers questions such as, “Have you had honest conversations about this definition and your expectations about the relationship?”

All throughout her life, Leyden said she has always been the go-to friend for advice. She has learned through experience that it is more helpful to steer away from telling people exactly what to do. Instead, she said she tries to encourage people to consider why they are struggling with a specific situation in order to tackle the problem at its root.

Working on a college campus, Leyden said she regularly encounters students who are stressed about their grades and how their GPA could affect their future career goals. However, when she meets with students who are comfortable speaking to her about personal issues, she references her blog, Leyden said.

“Although I’m not sure who actually reads, I see enough activity on my blog to know there are readers, along with people who thank me through email,” Leyden said. “There were at least four or five positive feedback I received in November, and, to me, that was enough for me to keep going.”

Leyden’s reason for creating “Life Lessons with Laurie” also includes her own passions to help loved ones and friends. She said she would love to show the blog posts to her children, nieces or nephews who would be able to see how people dealt with issues in the current generation.

One of the students Leyden advised, UCLA alumnus Brian Hsu, was introduced to Leyden during his time as an undergraduate statistics student. Hsu said he had spoken with other academic counselors on campus, but came out empty-handed, with no answers to his questions.

“(Leyden) really takes the time to understand where you are in the undergrad process and tries to give you a personable answer,” Hsu said. “She’s one of the unique resources on campus that pays attention to you as a person rather than you as a general student.”

Hsu recently discovered Leyden’s blog after speaking with her about the graduate school application process. After reading through the topics that Leyden discusses in her posts, Hsu said he sent her a note to commend her work, because he believed it would be helpful to many.

During his time at UCLA, Hsu said he had the same questions and wishes that he had those answers available for him at his convenience. He believes that hearing encouraging words from an academic counselor is especially reassuring.

As a peer counselor for Southeast Asian Campus Learning Education and Retention, second-year English student Ha My Le assists students on campus with resources, advice and emotional support. Having somebody like Leyden to vent to helps students find a support system amid the pressure and fast-paced environment of college, she said.

“In a campus of over 40,000 students, students might feel overwhelmed by the sheer amount of stimulus and new-found stress,” Le said. “(Leyden’s blog) seems like a great resource for students who might not feel comfortable in asking for help due to their introverted nature or other reasons that might inhibit them from reaching out.”

Leyden said she considers her advice blog a hobby outside of the work she does on campus. Although there is a growing demand for her time, she said keeping up with her blog posts has not been a source of stress. She said she continues to post on the blog because it allows her to reminisce on her time in college, when she had to figure things on her own.

“It was something I wish I had,” said Leyden. “I figured, maybe if this process of writing will make them feel better, I can actually put in my own two cents because I’ve been there.”