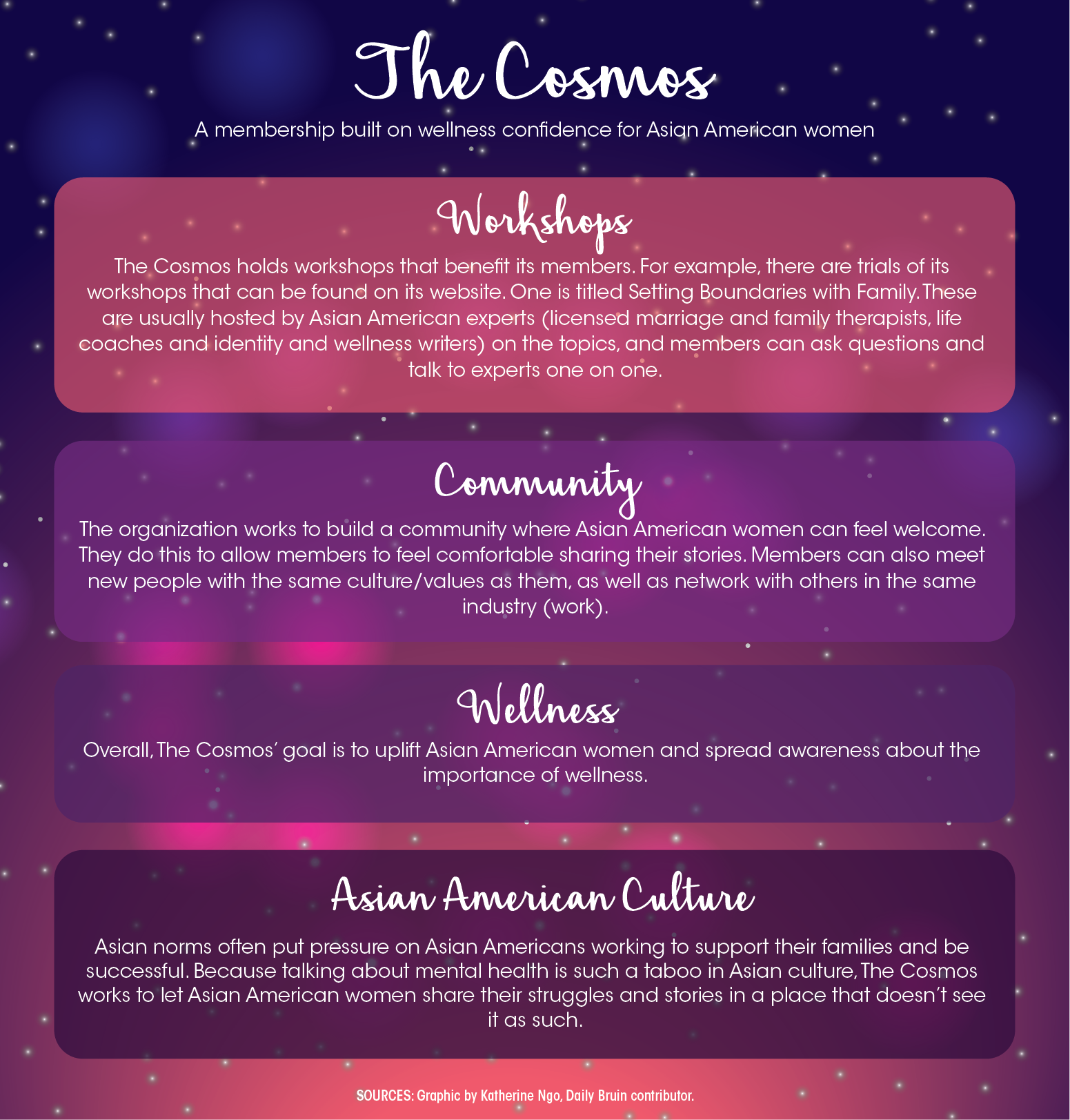 A question between two friends turned into an organization with around 10,000 members across the nation.

Alumna Cassandra Lam co-founded The Cosmos with her friend Karen Mok after having a heartfelt conversation in November 2017 regarding the question, “What does it look like for Asian American women to flourish and thrive?” However, what really catalyzed the development of their business were the opinions of other women that looked like them, Lam said. Lam and Mok published a post on Medium, in which they invited other Asian American women to contemplate the question with them.

“We thought we would only get 10 responses, but we ended up getting over 200 people who filled out this form,” Lam said. “It demonstrated that this question hit a nerve for many people.”

A month later, Lam and Mok held a three-day retreat in Seattle, where they filled an Airbnb with 22 people who were eager to discuss, unpack and reflect on their identities as Asian women. As they witnessed the community that could be established both online and in person, The Cosmos was born, Lam said.

“If we could do this with 22 people, what would it look like to translate this into a larger scale?” Lam said. “That was where it all began – this deep need that (Mok) and I had for cultivating a community that was authentic. It wasn’t rooted in anything professional, like what you do or what you study, but who you are.”

Lam said the organization exists both virtually on their private online portal and in real life, aiming to build a community centered around topics of wellness, mental health and identity. Currently, Lam said their main product is Wellness Confidence Founding Membership, which gives Asian American women access to professional workshops, a network of women with similar experiences, stories and in-person events.

After collecting data on what the Asian community really needs, Lam said she and Mok learned that health and wellness was the No. 1 priority, but also the No. 1 stressor for Asian women. This is why The Cosmos also offers 15-minute workshops led by real practitioners, life coaches and therapists. This is one of the main reasons that Da Eun Kim, a member of The Cosmos, believes it has been especially helpful for her. Kim said she feels well-understood and heard when speaking to someone who identifies as Asian like her.

“When I was in New York, I was lucky enough to have an Asian American woman as my therapist,” Kim said. “But I’ve actually had a lot of trouble finding that in LA through my health care provider, so that was really cool to see professionals that are eager to give their time to other Asian American women who share similar experiences.”

In addition to the personal connections between members and their practitioners, they can also voice their concerns regarding mental health, which is a topic that Asian American culture often disregards, Kim said. Because there is so much pressure within the community to put up walls and suppress emotions, Lam said the combination of community and professional support allows members to feel comfortable. The chat functions and ask-me-anything sessions on the platform provide a back-and-forth dialogue between members and practitioners, Lam said.

“A lot of the time, the reason why we don’t reach out to care is because it’s terrifying to dial a therapist when you only know their name and maybe a short bio,” Lam said. “What we’re doing is removing the third wall between practitioners and those that they could potentially care for.”

Apart from the organization’s online presence, Lam said they have worked to extend their organization across the United States by endorsing ambassadors in eight different cities, including Seattle, Chicago, Denver, Los Angeles and New York. These ambassadors are responsible for growing the local community in person through events like book clubs and holiday parties, she said.

Ronnie Mok, one of the Los Angeles Cosmos ambassadors, said she volunteered for the position because she was already working with diversity and inclusion at her day job. Before joining the team, Ronnie Mok said she hadn’t realized the importance of having an Asian American community. Living in Los Angeles, where diversity is constantly emphasized, blinded her from the experiences of Asian women. Being a part of this group, Ronnie Mok said the best feeling is witnessing someone feel understood.

“We talk about everything that you’d expect a normal person to talk about, but it’s through an Asian lens, so there’s not a lot of context that needs to be given,” Ronnie Mok said. “If someone’s like, ‘Hey, I’m having difficulties with my mom. We have a language barrier,’ she doesn’t need to overexplain to me. I know exactly how that feels.”

Although its focus is on well-being, Lam’s organization was named after the sky because of human dependence on nature. Lam said that the stars in the sky represent a sense of direction to mankind. Throughout history, all civilization turned to the sky when trying to find their place in the world, she said.

“To us, calling this community ‘The Cosmos’ resembles the Asian women community looking around, wondering where we stand and what our purpose is,” she said. “But even moreover than that, it’s about transcending where you are and using your imagination and creativity as tools to get you where you want to be.”