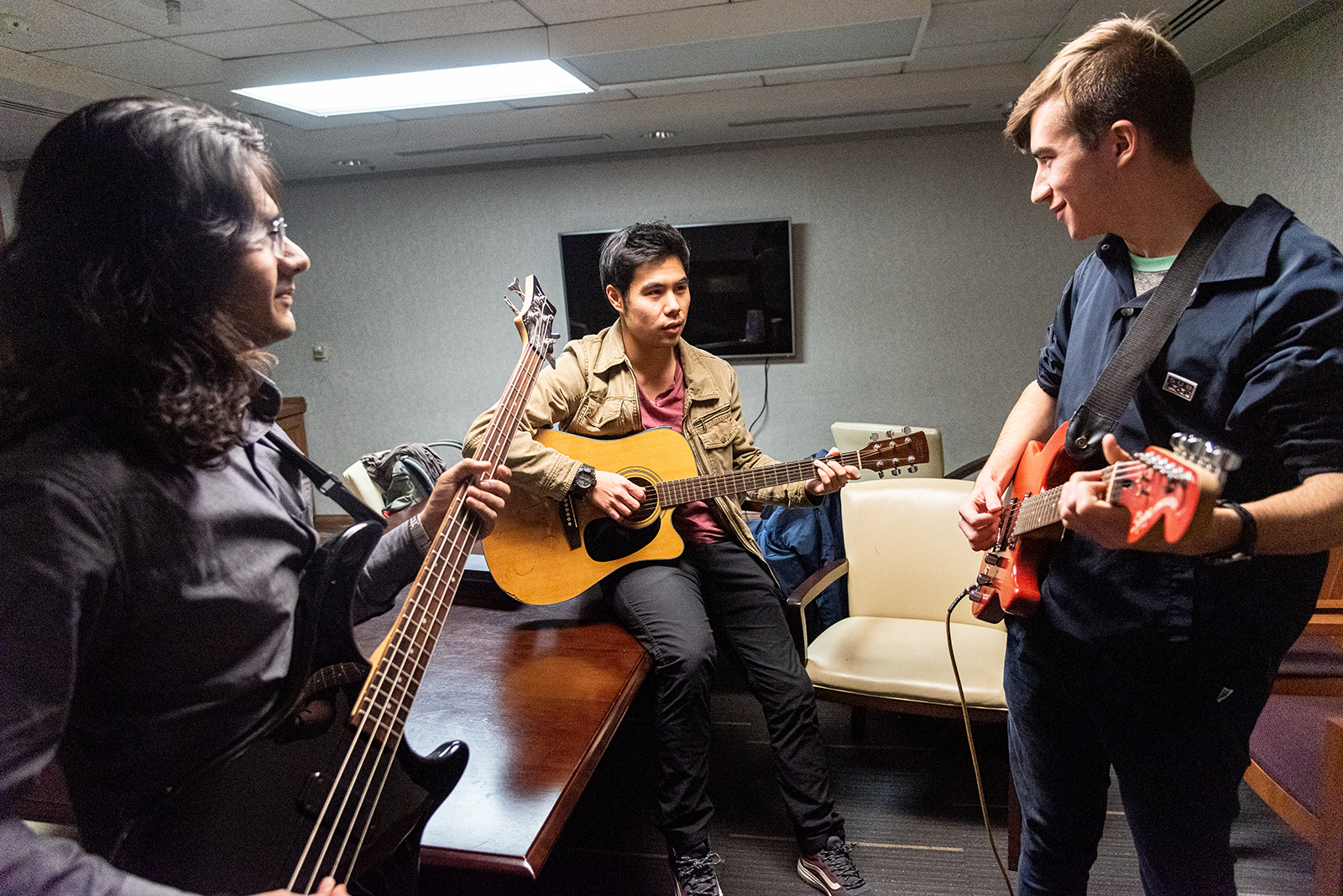 The Music Club at UCLA, created by alumna Helen Parish, allows students to explore music by playing and learning. Students with any level of experience can play or just have jam sessions together. (Daniel Leibowitz/Daily Bruin staff)

Students bring their instruments and passions to Kerckhoff Hall every Thursday night after a long day of classes.

The Music Club at UCLA was created by alumna Helen Parish for students to explore music by playing and learning together. Students with any level of experience can teach or learn to play instruments, meet other musicians or just have jam sessions together. Raziv Hasan, a third-year mathematics and economics student and the club’s marketing officer, said the casual, friendly environment of its meetings and music workshops makes it ideal for teaching and bonding. The Music Club establishes a sense of freedom within its meetings by not having a strict, set schedule. Instead, it allows for members to do as they please, and connections among students happen organically, Hasan said.

“People can come to these workshops and learn what they want to,” Hasan said. “The more experienced people will conduct them, and people who have less experience can come and chill. People can learn when jamming too – that always happens.”

The Music Club’s relaxed atmosphere also allows for a sense of community among its members. As a transfer student, Dylan Coe said he was seeking a club similar to one from his previous college – where he could meet people to form a band and forge friendships. A fourth-year geography/environmental studies student, Coe serves as the club’s co-president this year. Joining UCLA’s Music Club introduced him to new musicians, which allowed him to form a new band, he said.

“We’re an open community. We allow people with any experience level – you just need the enthusiasm for music,” Coe said. “We will teach you. We will provide equipment. We’re by far the most accessible option on campus.”

Coe said his initial eagerness led him to help the club grow, as he hoped to provide more people with the same positive experience he has had. Attendance was minimal when he first began attending club meetings and there was a lack of connection between its members, he said. Students would come to meetings with the goal of finding potential band members. Once they did, they’d disappear and never come back, Coe said.

To combat this, Coe said he and other members began advertising the club as a community rather than just a place to recruit members, using workshops and sharing resources to entice people. After making this change, he said they noticed more consistent attendance and familiar faces – the average attendance grew from five to almost 20 members.

As the club’s population increased, Coe said it has opened up many doors for students in the music industry. Sharing techniques, genres and learning styles can help members become more well-rounded artists, Coe said. Ruth Buergenthal, a first-year music history and industry student, was able to connect with a drummer who later became part of her band. She also said the club’s workshops, such as a recent one centered on surf rock, exposed her to new techniques utilized by different genres that she normally would not have been aware of.

“Everyone finds a way to work with each other’s strengths instead of against them,” Buergenthal said. “There are a lot of people who only sing, or only play guitar, or only play drums, or whatever instrument of all different levels. People are still coming back and feeling like they’re a part of the club in its entirety, not only when we’re singing that one song that that one person knows.”

Apart from the club’s focus on gaining music knowledge and networking, it also hosts a show, Band Night, in Kerckhoff Hall at the end of every quarter. Band Night features any student interested in performing in front of a crowd, including nonclub members, said Hasan. The show provides participants with exposure to larger audiences who can follow their work afterwards, he said.

“I performed at the fall quarter one, and I absolutely loved it,” Buergenthal said. “You get to see people of all different majors that you wouldn’t have met in any other situation.”

Although Music Club is an unofficial club on campus, Coe said he believes that aspect adds to its laid-back atmosphere. Members are free to do whatever they please, and are not obligated to follow certain rules required of an official club. The Music Club also allows hobbyist musicians a way to pursue their passions or destress without judgement, Coe said.

However, the club’s unofficial status has also led it to face a few obstacles, Coe said. For instance, because they rely on donations, club members must share instruments, Buergenthal said. Such instruments are more prone to wear and tear, as they’re broken down and put back together at every meeting, Buergenthal said. The members are hoping to combat this by publicizing their club more on campus in order to grow in number and minimize their financial burdens, he said. As of now, they have been raising their own funds.

“The whole club came together to rent out the place and pitch in (for Band Night),” Buergenthal said. “But the fact that we all pitched in made it so much more of a personal experience for us because it was money out of our pockets.” 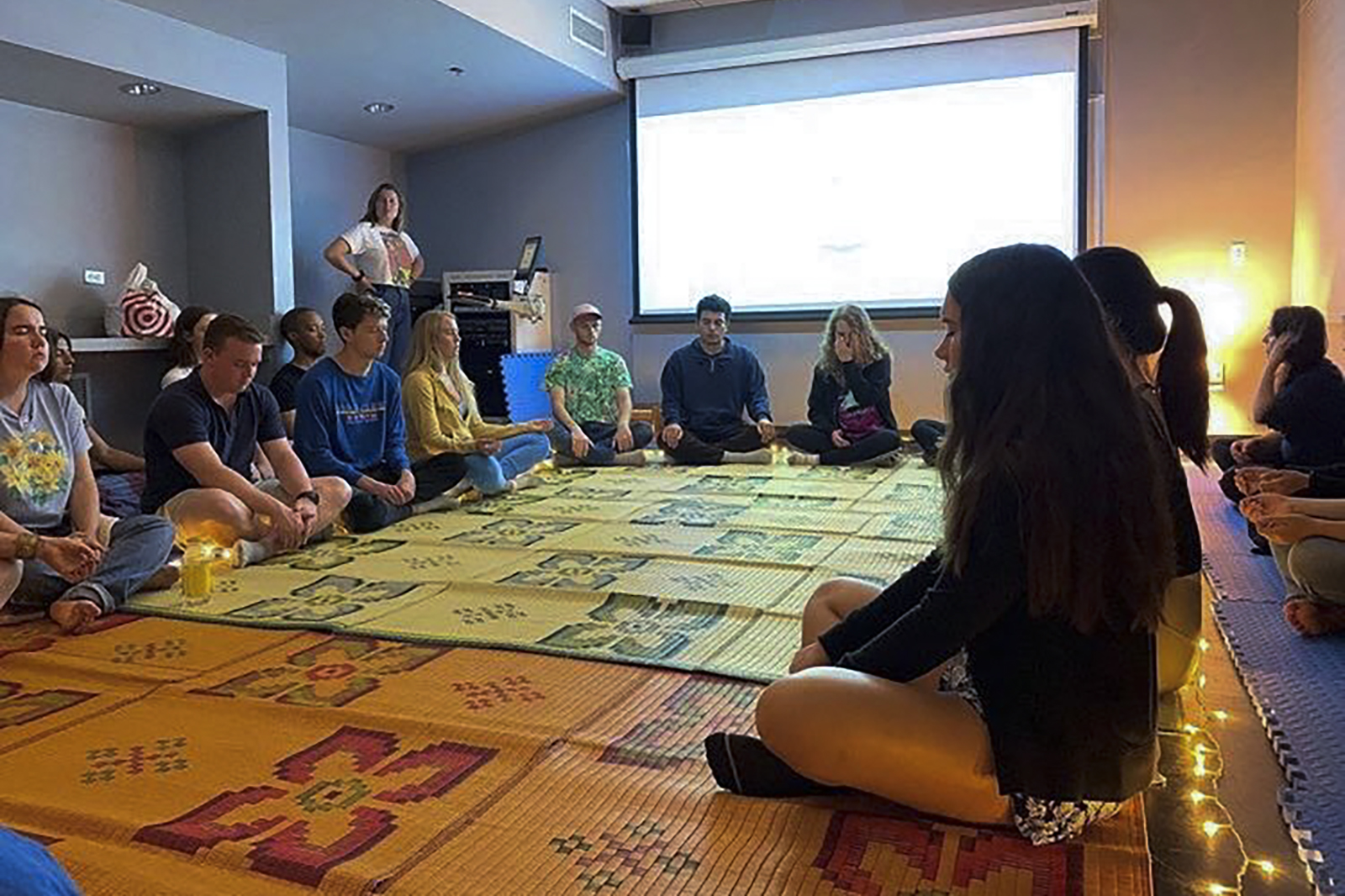