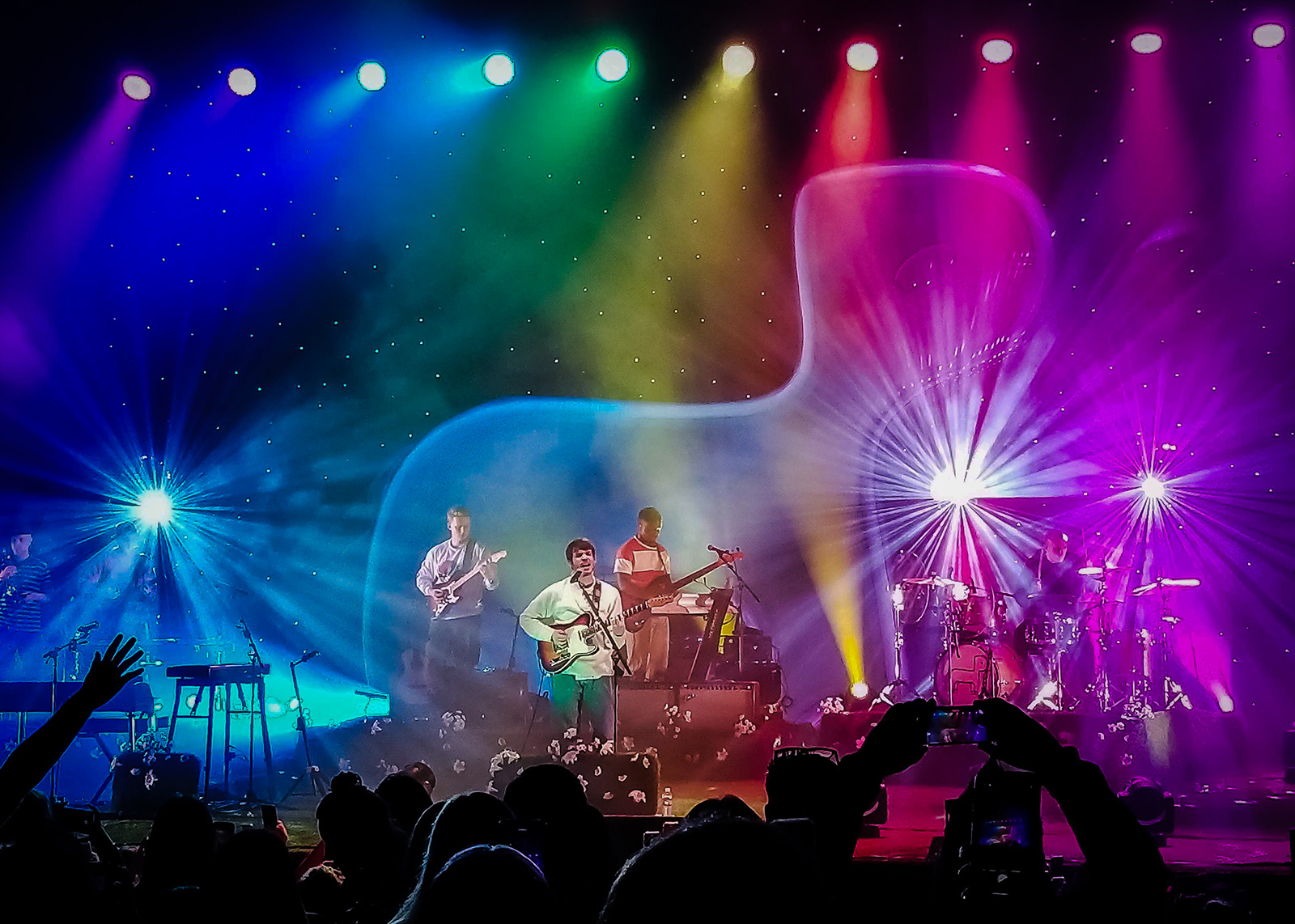 Rex Orange County treated everyone as his best friend as he took to the sunflower-filled stage of his Los Angeles show.

The English singer played at the Shrine Auditorium on Friday night as a part of his “The Pony Tour” for his latest album “Pony.” The stage was set with bushes and flowers on a playful green pasture as a sky covered by cartoon clouds floated still on a backdrop. Between audience interaction and colorful lighting effects, Rex put on a show that welcomed the crowd with his tender lyrics and consistently high energy.

The night opened with a performance of “10/10,” the first song from “Pony.” Rex took a moment to stand and look at the cheering crowd, smiling to mirror the album cover. He beckoned for the crowd to get louder as the rest of his band joined him on stage.

As the song continued, Rex ran between either side of the stage while red and orange light illuminated the performance. The lighting was complemented by a backdrop of a baby blue sky with clouds that shifted between colors along with strobe lights that flashed throughout the crashing chorus.

Without wasting any time, the singer moved on to “Laser Lights” while purple lights faded in to fit the soulful mood. His saxophonist drifted into a solo during the bridge, leaving the crowd screaming for more of the expressive tunes.

Passion and personal lyrics were showcased with Rex’s emotional performance of “Face To Face.” The singer, silhouetted by minimal lighting, grabbed his chest and closed his eyes throughout the song, leaving his feelings on his sleeve as the audience sang along with him. Kept at a minimum was the instrumentation, allowing the focus to stay on Rex and his voice.

After checking in with each section of the audience to make sure the viewers were having a good time, Rex drifted into “Never Enough.” In contrast to the minimal lighting used in previous songs, bright blue and green shades shined across the stage alongside sporadic purple lasers. The high energy from Rex’s performance carried over into “Television / So Far So Good,” with the saxophone and trumpet players adding their own creative flare to each chorus.

Alongside elaborate lighting, the show was marked by tender interactions between Rex and his fans. Between the smooth, jazz tones of “Stressed Out,” the singer took a moment to thank the crowd for their echoing. He even wished one audience member a happy birthday, showing the personal connection he takes care to foster with each of his fans.

After chatting with the crowd, the stage was flooded in blue light for “Pluto Projector,” which grapples with growing old and becoming more mature in relationships. The stage theatrics matched the song by painting a sunrise with stage lights; a projection of a blue sky reigned over the stage while a single orange light moved up from the horizon. The arpeggios during Rex’s guitar solo mixed smoothly with his clear voice to create a mesmerizing moment.

With the sudden fall of a curtain, Rex took the stage on his own with a sole keyboard. Minimalistic lighting emphasized the quaint feel of this part of the show, where theatrics were kept to a minimum and Rex sang directly to the crowd.

He started the personal segment with “Every Way,” an emotional piece he performed with his eyes closed, crafting a somber mood.

After the series of slow, passion-centered songs, “Corduroy Dreams” brought a higher energy back as Rex bounced on stage and initiated calls and responses. Although littered with fun moments, Rex’s whistle solo was among the most notable moments of the song, as he hit the high notes with ease.

In an epic transition, the curtains pulled away to reveal an entirely new stage filled with lights that displayed all colors of a rainbow and a giant cartoon pony. The singer then transitioned to one of his most popular songs, “Never Had The Balls,” with the same wild theatrics as the songs at the beginning of the set list.

After prompting audiences to put their phones down for his performance of “Sunflower,” Rex ended with “It’s Not The Same Anymore,” where he sings about his struggle with his mental and physical health during recent years. And as Rex guided the audience through his personal journey, he ensured audiences left feeling warm and hopeful for whatever comes next.