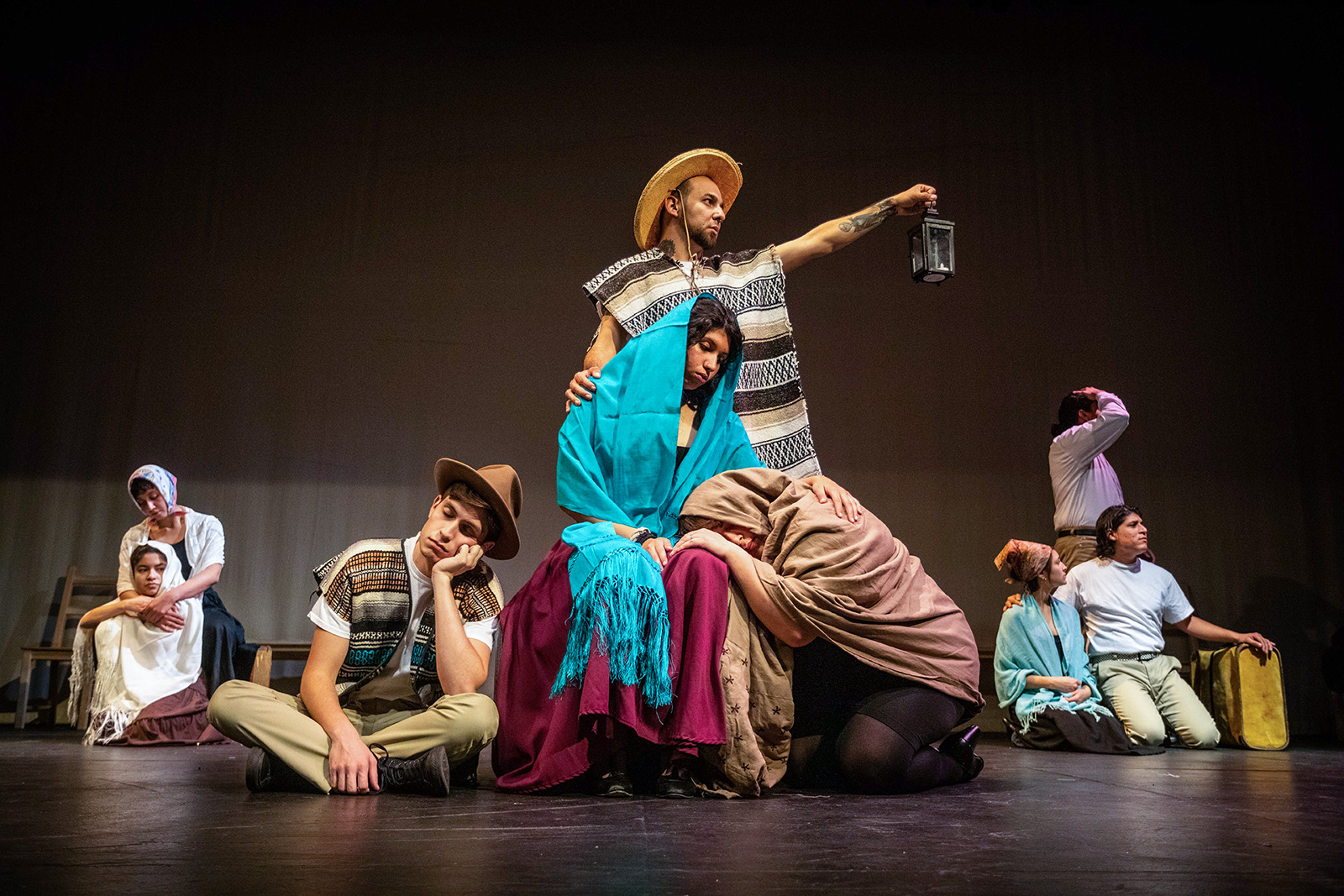 A group of migrants in northern Mexico waits for a train bound for the United States in 1915 during the opening scene of “La Víctima.” The show, put on by the Latino Theater Company, tells the multigenerational story of the Villa and Mendoza families during the era of the Great Depression. (Jintak Han/Daily Bruin senior staff)

"La Victima: A Play with Music"

The Latino Theater Company’s international guest artist was scheduled to perform in October.

Instead, she was detained and deported by U.S. Customs and Border Protection.

The production is a collaboration between the UCLA School of Theater, Film and Television and East Los Angeles College, featuring actors from both schools. Directed by UCLA professor emeritus, and the company’s artistic director, José Luis Valenzuela, “La Víctima” tells the multigenerational story of the Villa and Mendoza families, following them through the Great Depression and decades of challenge. Though the play was written in 1976, the story maintains relevance in the face of anti-immigrant policies and sentiments, Franco said.

“This isn’t an issue that is just now being presented to us,” Franco said. “This is generations of pain, of hurt, that we really want to represent – the people that actually shape our society in ways that go so unnoticed.”

Originally written the year of the bicentennial celebration of United States independence, Valenzuela said “La Víctima” questions whether Chicanos had achieved the same independence. Valenzuela has directed productions of the play in almost every decade, each production necessitated by a different contemporary conversation about immigration.

This time, he said he’s responding to the fear generated by immigration raids in the community and the August white supremacist shooting targeting the Latino population in El Paso, Texas.

Despite the play’s age, some of the language and situations reflect realities many families today must contend with, said actor and UCLA alumnus Israel López Reyes. The play deals with the separation of a mother and son, a problem heartbreakingly magnified at the border today. The familiarity of the situations in the play speaks to the cyclical nature of xenophobia and racism, López Reyes said.

Valenzuela wanted the cast to understand the events and legacy that informed the play so they could better understand why history seemed to repeat itself. He spent time explaining events such as the Mexican “repatriation,” which took place in the early 1930s and involved the deportation of between 750,000 and 2 million Mexicans and Mexican Americans, who were blamed in part for the economic circumstances of the Great Depression.

“They always use immigration as a scapegoat for economic crises in the country – anything, they can blame us,” Valenzuela said. “That’s a very important conversation for the actors that I’m working with: trying to understand how the characters they are playing are part of that landscape in the United States.”

Another key conversation surrounded the modern realities of immigration and the experience of undocumented immigrants; one particularly resonant moment for Franco was an exercise in which cast members answered simple questions about their lives with a partner from the other school, she said. Franco’s partner shared her experience of immigrating with her family and settling into the United States, which inspired and motivated Franco. Creating connections gave the cast a reason to fight for what they believe on stage while considering ways to address the political issues at hand and serve those impacted, Franco said.

And, at its core, Valenzuela said “La Víctima” is meant to be a service-oriented play. In addition to the initial run at the Los Angeles Theatre Center, the show will tour around Los Angeles, and all productions will be free of charge. Additionally, there will be tables for different immigration organizations along with tickets that will list rights and resources for undocumented workers, Valenzuela said.

Such real-world implications provide immediacy and relevance to the show, which in turn comes with a greater sense of responsibility, López Reyes said. However, he said he hopes the show is able to both start a conversation and bring joy to audience members.

“That’s why we do this, … to give individuals that are invisible a sense of dignity through storytelling and character,” López Reyes said. “I hope that they see a reflection of who they are, and I hope that in these times that are so xenophobic and marked by miscommunication, that they find a sense of joy and love in the room.”