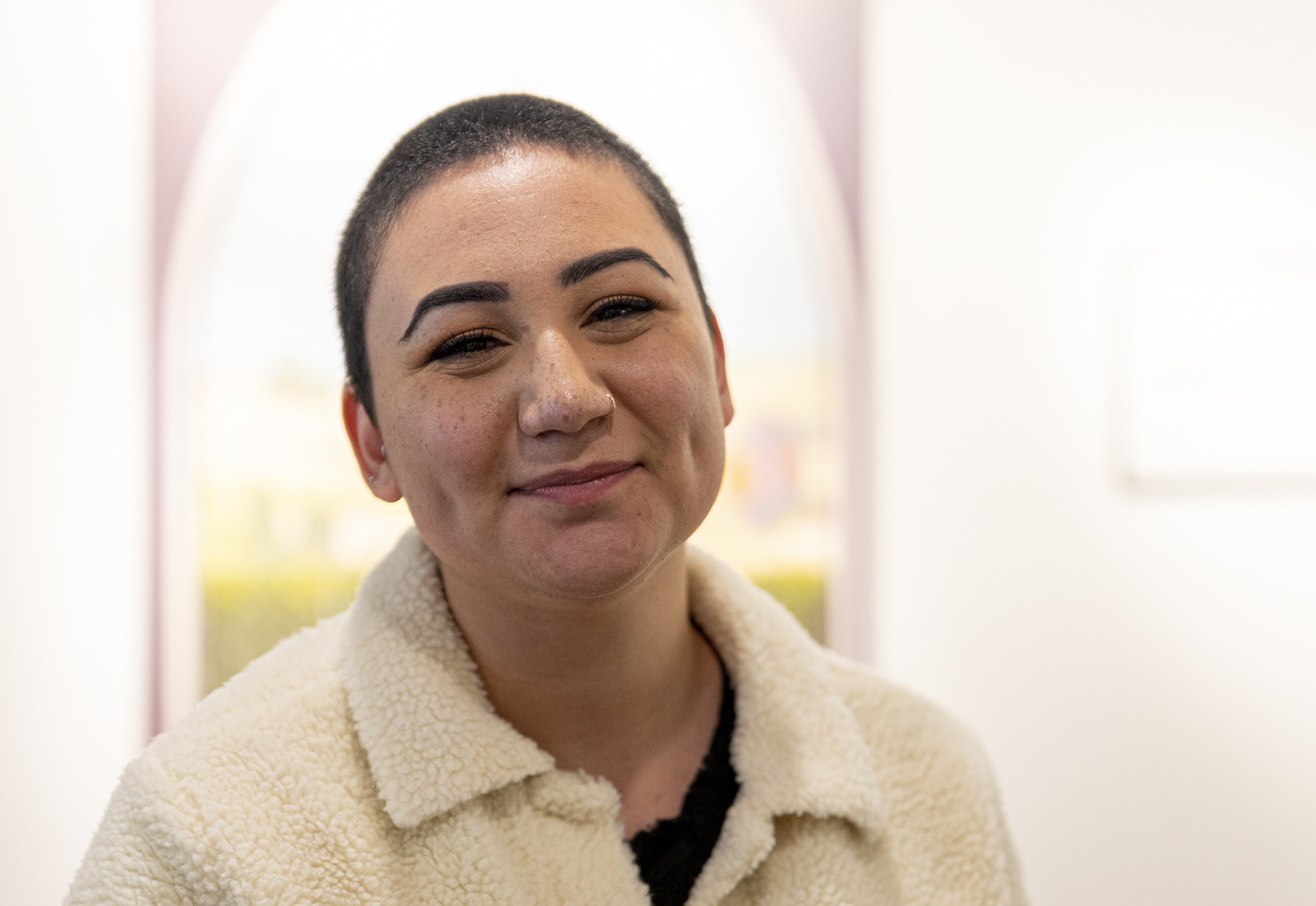 Shelby Montelongo has repeatedly visited the Salton Sea with her brother Ian Montelongo multiple times since their first trip for Shelby Montelongo’s birthday in 2014. While there, they each created their own art, which they have collected into the gallery “Hairline Fracture,” which will be on display at Upside Down cafe on Saturday. (Ashley Kenney/Daily Bruin)

Despite the warning, Shelby Montelongo decided to photograph herself lying on the shore.

Opening Saturday at Upside Down cafe, “Hairline Fracture” is a creative documentation of artist siblings Shelby and Ian Montelongo’s five years’ worth of visits to the Salton Sea. Ever since a birthday trip in 2014, the pair has taken trips, or “art jams,” to Bombay Beach – a community on the eastern shore of the Salton Sea – to explore the abandoned buildings. The upcoming exhibit will feature works ranging from self-portraits to paintings to performance art videos from their various excursions.

“Bombay Beach is so fascinating in that half of it is people that still live there and the other half are these abandoned trailers that are stuck in the mud,” Shelby Montelongo said. “It’s all dried out now from the rising and depleting levels of the Salton Sea. It’s something I’ve never seen before. It’s so bizarre.”

The siblings first visited Bombay Beach after a planned trip to the nearby Salvation Mountain art installation, where a volunteer recommended they check it out. After learning about the abandoned buildings and a rusted crane sitting on the shoreline, Shelby Montelongo said they were immediately hooked on the location.

For the siblings, visiting the Salton Sea was a release from their own everyday feelings of pressure. The exhibition’s title – “Hairline Fracture” – is inspired by the injury of the same name, which Shelby Montelongo said is the result of consistent, low-grade pressure leading to a stress fracture. When they began taking the trips, Shelby Montelongo said her brother was dealing with feelings of self-criticism and she was grappling with her own identity as an artist. Because Bombay Beach is so secluded, she said they both felt free to experiment with their art outside of public pressures.

“My brother and I discovered that … it was really cathartic to take our trips out there because the landscape is just so different than anything we’ve ever seen,” Shelby Montelongo said. “We both grew up in Orange County. Being in (Bombay Beach’s) harsh desert conditions with abandoned houses, it just provided a catalyst for healing.”

Bombay Beach provided Shelby Montelongo a space to experiment with her art, allowing her to explore self-portraiture. Utilizing a plastic Holga camera, she set up her equipment and would take photos of herself in the abandoned buildings. Over the years, this evolved into performance art videos.

In January, Shelby Montelongo said she dragged an abandoned chair from the shoreline and set it up elsewhere in the city. It was covered in bird poop, falling apart and likely home to mites, but she sat in the chair for 20 minutes, filming herself snuggling into it. The video, which will be on display at the exhibit, was a freeing moment for her, as she said it was her first video taken at Bombay Beach and reflects her shifting art style.

Ian Montelongo, on the other hand, focuses more on paintings and illustrations. He said creating art in open air is difficult in the intense desert heat, so the siblings took reference photos of the town and he then based his art off them. He said he didn’t set out to explore Bombay Beach with a specific goal, instead choosing to explore the ruins and find his own meaning in what remained.

In recent years, Shelby Montelongo said there has been a push from the state to improve the area, and investors have been buying up the abandoned properties. Buildings they once had free access to are now boarded up, and much of the graffiti has been cleaned. Ian Montelongo said some of the buildings they had grown accustomed to seeing on their trips have been torn down or boarded up, limiting their access throughout the community.

Photographing the beach’s abandoned buildings reflects more than just dilapidated structures, Ian said. Standing in the rooms and seeing remnants of someone’s past life forces them to consider how the space exists beyond their interactions with it.

“You can see that (the building) was part of someone’s life, but this is after the fact,” Ian Montelongo said. “It makes you self-aware of a blank slate where you can think openly and honestly.”

Shelby Montelongo works as an intern at Upside Down with Melissa Moskowitz, who coordinates galleries at the cafe and plans the small details such as working with installers, writing wall statements and running social media. As a New Yorker, Moskowitz said she had never heard of the Salton Sea before, and seeing their art helped contextualize the area’s decline for her.

For Shelby Montelongo, “Hairline Fracture” is helping to catalogue the changes occurring in the area. One of her brother’s paintings is of an abandoned gas station: Based off a photo taken three years ago, the piece shows a broken-down, open building. When his painting is compared to a photo Shelby Montelongo took of the same structure in January, she said her photo reveals the windows to be boarded up and the wire fence mangled to try and salvage it. In highlighting these changes, Shelby Montelongo said they’re revealing just how much the location is shifting at the moment.

“We are documenting this really specific moment in time as there’s this progression,” Shelby Montelongo said. “The Salton Sea is just in a really large transition period right now.”