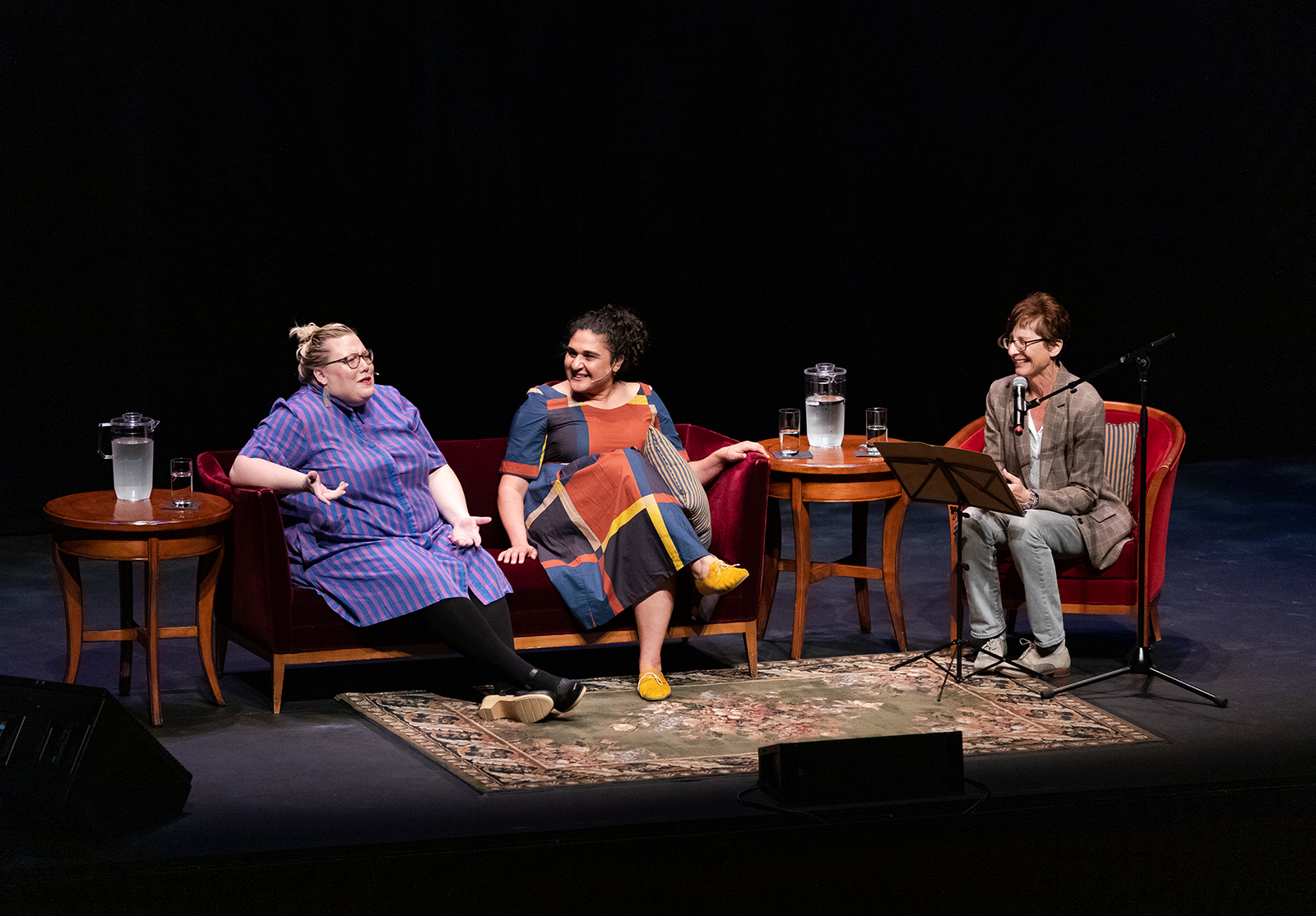 Lindy West (left) and Samin Nosrat (center) took the stage to answer questions Sunday at Royce Hall. West said when she worked on adapting “Shrill: Notes from a Loud Woman” for television, she learned that good television included cutting most of what she had written. (Tanmay Shankar/Assistant Photo editor)

The former, consisting of milk, flour, butter, cinnamon and sugar, and the latter, consisting of rice, soft vegetables and yogurt, were staples in each woman’s childhood kitchen. West, who wrote “Shrill: Notes from a Loud Woman” and its Hulu adaptation, joined Nosrat, who stars in Netflix’s “Salt Fat Acid Heat,” onstage Sunday night at Royce Hall. As a part of UCLA’s Center for the Art of Performance’s Words & Ideas series, the pair discussed their rising stardoms, their creative processes and how they have found spaces to belong in the writing world.

Director of education and special initiatives at CAP UCLA Meryl Friedman, who moderated the discussion, opened the night with rapid-fire questions, then asked the pair how they have handled the specter of celebrity. For Nosrat, she intended for viewers of her show to feel as if she’s their friend in her home, creating a sense of intimacy. Fans have even gone as far as inviting her to their homes after events.

For West, it is the simple act of needing to brace oneself when she leaves home, as many people feel personally connected to her work. West said she never dreamed of being a “fat feminist icon,” and she cannot imagine what her work would look like without those aspects of her identity. Though she said she is grateful that people feel represented by her work, it often feels as if she cannot go somewhere without having to talk to people.

Following a brief tangent about West’s unabashed love for “Naked and Afraid,” Friedman asked how their creative processes have changed since adapting their written works for the screen. West said creating “Shrill” forced her to learn that making good television involves cutting most of what she had written. But for Nosrat, the difference in collaboration is what stood out, she said.

While the book version of “Salt Fat Acid Heat” was guided by her instincts and involved an intimate partnership with her designer and illustrator, Nosrat said working on the show was overwhelming. She said her lack of background knowledge regarding television production made her feel as if the project that had once been so close to her was suddenly out of her hands.

Referencing a previous CAP UCLA conversation, Friedman then asked the pair how people can maintain hope within the current political climate. Nosrat said people’s greatest currency is time – when spending time cooking for wealthy people in restaurants and their homes, she questioned how she was using her time to help people. But when coming together with her friends to put together small meals for strangers, she said she felt fulfilled, and believed her cooking was doing good in the world.

“The most I can do is pass kindness and goodness along,” Nosrat said.

The conversation then turned to audience questions, in which one person asked Nosrat whether her Iranian American heritage and travels during her culinary exploits have changed how she approaches her practice. Nosrat said she was taught to cook in a traditionally European kitchen, and as she travels, she clarifies to the people she works with that she only asks that they share their techniques. For people unfamiliar with the television world, the demanding schedule and reshoots can be daunting, which is why Nosrat said she sits people down and explains the entire process so they feel comfortable in front of the camera.

Friedman brought the night to an end by asking West and Nosrat who has encouraged them throughout their careers. West said she relies on a group of childhood friends to keep her in check. In the same vein, Nosrat tied her answer back to her rising stardom and the need to surround herself with those who know who she really is.

“Once I started getting attention … I stopped to have this moment of, ‘Oh, this is a slippery slope,’” Nosrat said. “It’s easy to be around people going through the same thing as you. There’s no pressure. But then you don’t have people who will hold you accountable.”