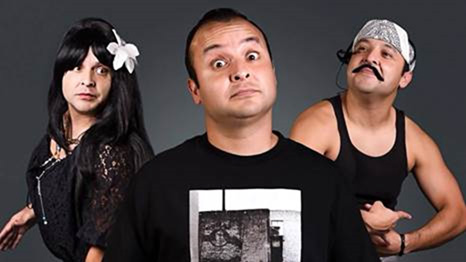 Comedian Frankie Quinones will be performing his one-man variety show at The Wiltern, incorporating several original characters such as Creeper, a Cholo and fitness guru, and Juanita Carmelita, a suburban Latina drama queen. (Courtesy of Frankie Quinones)

Frankie Quinones can switch from one personality to another within one costume change and a few minutes.

The comedian – who has appeared on Funny or Die, Comedy Central and HBO – will be performing his one-man variety show at The Wiltern on Friday. Quinones said his performance incorporates several original characters, ranging from Creeper, a Cholo and fitness guru, to Juanita Carmelita, a suburban Latina drama queen. Quinones’ upcoming show in Los Angeles is one stop in his tour across the nation.

Quinones discussed how his style of comedy came about, his hardships and his breakthroughs with the Daily Bruin’s Julie Lee.

Daily Bruin: What initially inspired you to get into comedy?

Frankie Quinones: My family. They were always hard stand-up fans. We lived in a one-bedroom apartment when I was growing up, and my parents worked really hard. Humor was a big thing that got them through things, and that’s what helped them stay positive. I would perform for them in front of the TV, getting dressed up to play different characters. All my stand-up is based off stories of growing up, or people that I met growing up. My characters are pretty much based off family and life experiences.

It took me a while because I was the first one to go to college in my family, and although they thought that was (the right) direction, I still wanted to entertain people. So finally after working for five years after college, I made the decision to quit my job and pursue stand-up full time. I’d say my biggest inspiration is the power that humor had in my family’s lives.

DB: You are famous for your one-man variety show, where you switch from character to character. How are you able to get into the mindsets of all these different personalities?

FQ: The most popular one is Creeper, who is a reformed Cholo and fitness guru. That’s what I grew up around. My dad was also a Cholo; he always had a lowrider, his Dickies and his Chuck Taylors. … But I would say Creeper is a person that a lot of us all related to, so when I become him it’s really nostalgic to me. I feel a piece of my father in me. It kind of crossed over to not only just people I grew up with but even people from all different communities, especially people that are into fitness.

And Juanita Carmelita is that spicy Latina, we all know one of those. But that’s pretty much my mom; she’s very stubborn and opinionated, but always full of love. A lot of the characters have become natural for me to be able to tap into them right away. That’s how I can perform live and pull it off just because I’ve been doing it for a long time.

[RELATED: Bruin comedians stand up against other schools at Laugh Bowl]

DB: How do you think the hardships you’ve faced have shaped you as a comedian and performer?

FQ: Anxiety and pressure is definitely a real thing. I deal with it like a lot of us do. My shows are really physical, especially because I have to change energies a lot. But if I were to have a weekend full of shows, I do have to have a decompression day because my body breaks down. I’m not in my 20s anymore. During my meet-and-greets after my shows, I do them as Creeper. A lot of people want to take photos with me doing the Cholo squat, so I do about 300 squats a day.

The thing that keeps me going is the people. I have to make physical adjustments by working out, but for the people, I can’t let them down. I still want to put a smile on their faces, so I’d say my love for making people laugh is what gets me through those physical challenges.

DB: How long have you been doing comedy, and would you ever branch out to do anything else?

FQ: September marks 15 years that I’ve been pursuing stand-up, but even during those years I’ve incorporated different voices and storytelling, so naturally character work was involved. But I write on some shows, and we just got a couple development deals to make a TV show possible. Right now we are hoping to sell a narrative TV show.

DB: What show or web series that you’ve been featured on has been most memorable to you?

FQ: Craig Robinson took a liking to me, and took me under his wing to mentor me. He really inspired me and helped me to work harder. Also, a couple of my friends and I that have known each other for 10 years sold a TV show that is not out yet. Those were my breakthrough moments, but other than that I was doing odd jobs. I was bussing tables, Postmating, delivering sandwiches, a lot of times to UCLA. The last time I ever had a job was doing Postmates, and my very last delivery was a sandwich (from) Jimmy John’s to a kid who lives in an apartment right across from the UCLA campus. This was when I got the call that our show was sold. When I saw the kid I told him, “You’re my last delivery, my friends and I sold a television show to Time Warner!” and he didn’t believe me.