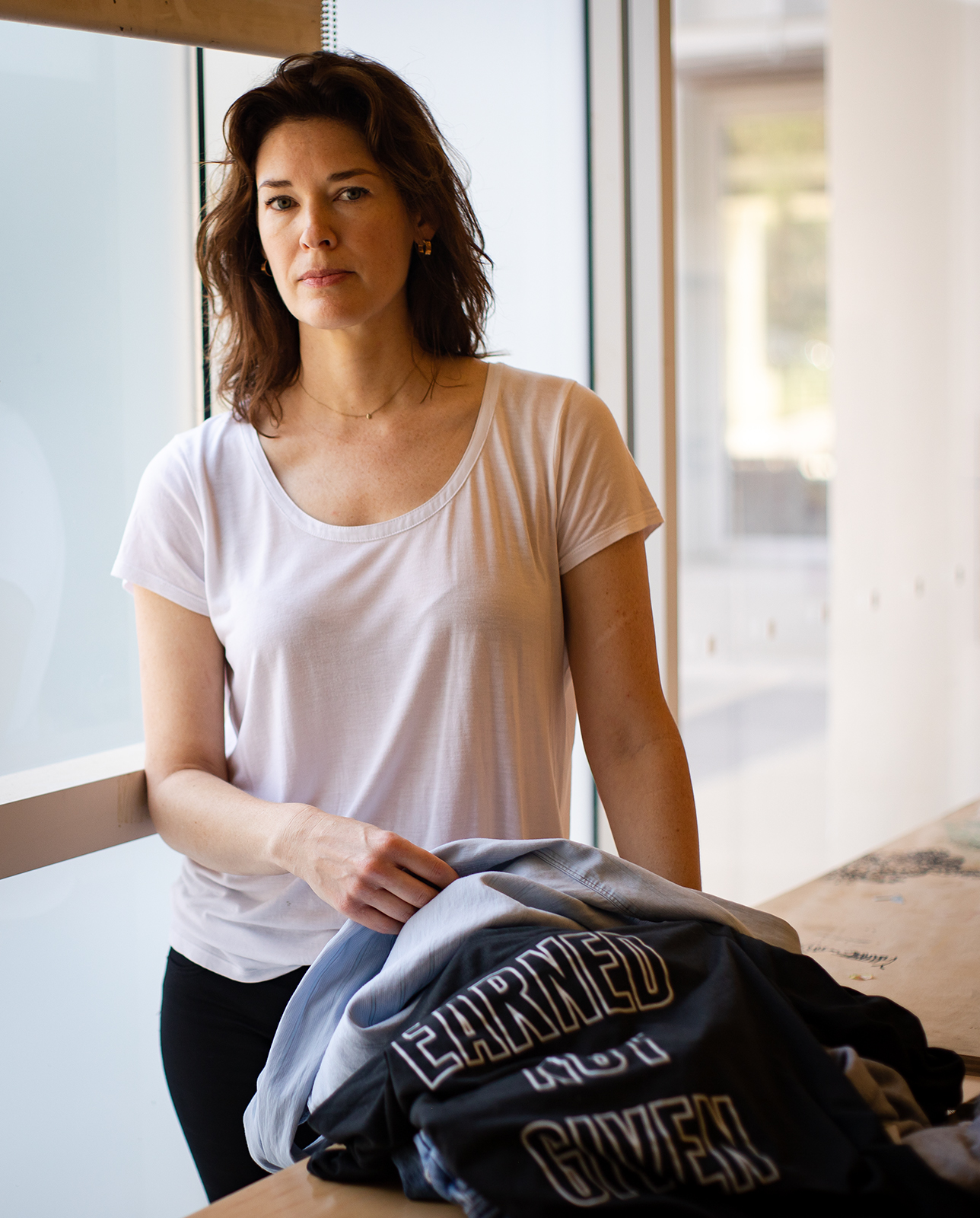 Design media arts graduate student Erin Cooney is making a piece for the “Context Collapse” exhibition. The piece, she said, will include a body made out of clothing filled with plastic debris to represent immigration and climate crisis. (Tanmay Shankar/Assistant Photo editor)

The cues and contexts of human interaction are stripped away online and on social media where different backgrounds, environments and points in time crash together, according to the theory of “context collapse.”

The UCLA Department of Design Media Arts 2020 MFA class’ fall group show, “Context Collapse,” explores how that idea comes to play in art – the idea that multiple works coming from vastly different perspectives viewed together can create a new context of understanding.

Opening Oct. 17 and featuring work from all 11 second-year students in the program, the show spans a wide range of mediums, from sculpture to projection mapping, and themes such as climate change and computer tracking. By offering the public a preview of the students’ eventual thesis-level work, the show allows students to experiment and build toward their spring thesis show in a process that is both artistic and engineering, said assistant design media arts professor Lauren McCarthy.

“There’s always a certain amount of research and development in realizing the concepts and the vision that (the students) want, but also technically solving a lot of challenges,” said McCarthy, who also serves as the show’s faculty coordinator and curator.

The development phases have been ongoing for design media arts graduate student Dalena Tran. Her piece incorporates both sculpture pieces and two-channel projection, in which projectors are located on either side of a canvas and simultaneously project different videos to create a new image. Tran said the piece recreates a moment when she first moved to Los Angeles and witnessed a burst pipe flooding a parking garage. The work is inspired by both a dream and her memories about the experience – exploring how reconstructing a memory necessitates filling in the gaps, and sharing the context of her process of interpretation.

Tran wanted to physically ground this exploration, and chose to use sculpture to bring the context of the work into the physical space. She initially tried working with ash, but felt the material didn’t get her point across about exploring the reconciliation between memory and imagination and wasn’t logistically conceivable because of transportation challenges. She then turned to other materials, starting by making small versions of the sculptures to test their success.

“I’m going through a lot of trial and error with the sculptures,” Tran said. “The sculpture pieces are very fragile and they’re supposed to be … I’m going through all these steps that I make small versions of it and then, if it’s successful, I go up a notch and I make it a little bit bigger and I just keep rescaling, changing my materials.”

For design media arts graduate student Erin Cooney, the experimental process has only occurred in her head thus far because she spent the summer traveling. Her idea, she said, starts as a large enclosure made out of chain-link fence, and in the center, Cooney wants to build a massive body made out of clothing filled with plastic debris. The piece will also have ocean and desert landscapes projected down onto it, both representing sites of human migration.

“I have a vision of how this body is going to appear, but making that happen and bringing the sort of realistic corporeal sense I want to to this body, filled with plastics and placing it in such a way and connecting these arms and legs and torsos together, that’s going to be just created and we’ll see what happens,” Cooney said.

The piece serves as a way to work through what has been in Cooney’s conscious universe, she said. The idea for the piece was born from news coverage she had watched about immigration and climate crises.

The piece invokes the imagery of chain-link fences that she saw being used to cage migrant children, masses of plastic that constitute plastic litter islands floating in the ocean and the desert and ocean landscapes that serve as sites of migration. By juxtaposing those contexts, Cooney hopes to connect the topics and point out where they overlap.

“My feeling is that migration, because of climate crisis, is only going to get worse, in fact, much worse, and we’re having trouble handling peacefully the migration that’s happening now,” Cooney said. “I am trying to consciously bring together ideas of climate crisis and migration and so, in other words, human crisis as well.”

With such a wide range of projects, the gallery layout poses a challenge for technology implementation, said experimental design arts supervisor Gareth Walsh. To help students use the equipment, Walsh advises them on the best way to integrate necessary technology, such as projectors, TVs and sound systems, seamlessly into their works. Additionally, students’ specific needs for darkness versus light, or loud and quiet environments can also pose individual challenges, he said.

While considering placement, McCarthy said she also considers the spatial layout. The pieces need not only space to stand alone from each other, but also to allow participation from the audience, creating a context particular to the show and the pieces on display. McCarthy said she hopes the exhibit and works help provoke larger questions about society and the future.

“There will be pieces where you are invited to lie down and actually get inside the pieces, where you become a part of it because some part or aspect of your data that is captured,” McCarthy said. “I think the audience will have an experience where they’re looking at the art but they’re also becoming a part of the environment.”