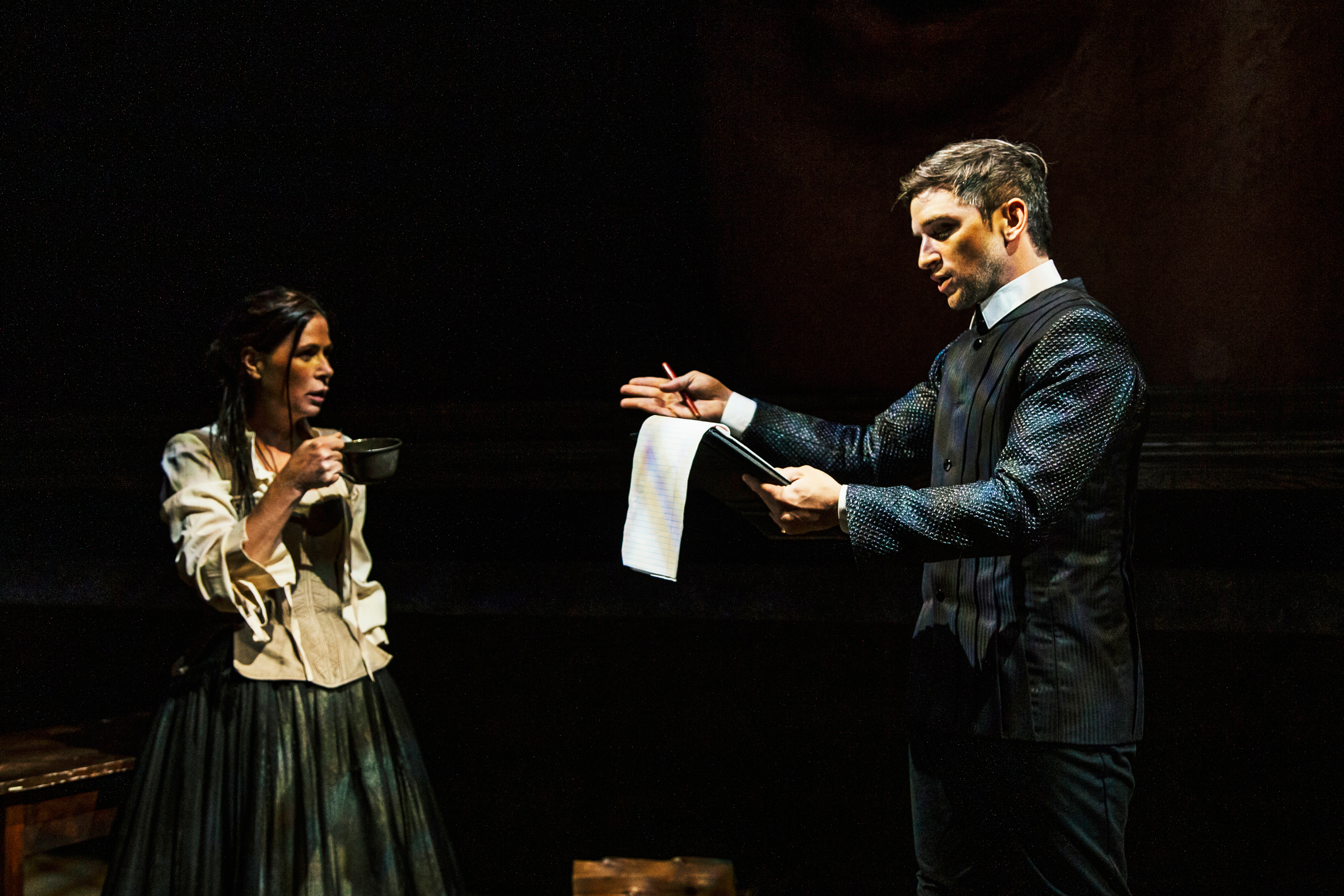 The devil searches for souls to call his own, but in “Witch,” he also finds a women’s heart he hopes to win over.

Running at the Geffen Playhouse until Sept. 29, “Witch” is a six-character play exploring the complicated lives of individuals living in the village of Edmonton. The show centers on Elizabeth Sawyer (Maura Tierney) – a woman the town perceives to be a witch – as well as the competition between the ruler’s son Cuddy Banks (Will Von Vogt) and go-getter Frank Thorney (Ruy Iskandar) for the village’s throne. As the story progresses, the characters are confronted with complex romantic relationships, along with the pressure of making crucial, life-changing decisions.

The theater features a large painting of dark, ominous eyes acting as a background to the main stage. The eyes seem to scrutinize the decisions of performers throughout the course of the show, highlighting the production’s major themes of judgement, gender inequality and privilege. The stage’s imagery provides a curious, unsettling atmosphere to the show’s production.

The play begins with the immediate unveiling of Scratch (Evan Jonigkeit) as the devil in disguise during a conversation with Cuddy. After an ironic sequence of events, in which Cuddy and Frank both sell their souls in an attempt to acquire their mischievous desires, Scratch makes his way to his desired client, Elizabeth.

Citizens of Edmonton are quick to refer to Elizabeth’s quirky character as a witch due to her serious and brutally honest persona, providing a layer of witty social criticism to the production because of the unfounded and humorous accusation. The heavy-handed social commentary continues later into the play, when it is revealed that although Elizabeth and Sir Arthur Bank (Brian George) were engaged while she worked at the palace, she faced consequences – such as receiving ridicule from the public – that her male counterpart was able to avoid due to his social status. Her situation demonstrates how women in the town of Edmonton are easily judged and mistreated in the scandal-prone village, driving home the play’s overarching point.

With the negative stigma surrounding Elizabeth, Scratch expects her to sell her soul to him with no hesitation. Yet, to everyone’s amusement, this is not the case. Elizabeth continually refuses to accept Scratch’s offers throughout the production, causing Scratch to question his sales techniques. As Elizabeth refuses to succumb to the opinions of the literal devil, the scene is a refreshing demonstration of the balance between poignancy and humor, as the spotlight is seen on a woman who isn’t afraid to take a stance and say “no.”

Throughout Scratch’s attempts to acquire Elizabeth’s soul, she is quick to point out that he treats her differently as a woman, offering things of little worth in exchange for her soul, while he is more likely to take riskier bargains with men. But as the story develops, Scratch stops bidding for Elizabeth’s soul and rather attempts to win over her heart. The change of events adds an unexpected but welcome twist to the performance. With Scratch exposing his lost passion in his career and a newfound passion in a woman, “Witch” finds its calling in its ability to offset social commentary with romantic comedy.

The show truly shines in its accurate and representative female characters. Elizabeth herself was a refreshing reminder that females have the ability to say “no” and speak their minds freely. Although she ultimately does request to sell her soul in return for the destruction of the current society, her plea was made in hopes to create a new and more accepting society on Earth. Her character demonstrates the pain of being cast as an outsider, but ultimately shows the growth and humility that can result from that as well.

During one scene, in which Scratch questions the truth of a statement Elizabeth makes, she refutes back, claiming her opinion comes from experience. As a character, Elizabeth epitomizes the reality that often when women speak on a subject matter, their credibility is driven from personal experiences.

However, while “Witch” was captivating and thought-provoking for a majority of the production, a few unnecessary scenes poorly sidetracked from the play’s central plot.

A monologue attempted by Sir Arthur Bank toward a portrait of his deceased wife, discussing the struggles he faces with his son, Cuddy, was cliché and didn’t make a good case for his pity party. Later, a one-man dance break by Cuddy failed to add any significant value to the show, not to mention the repeated attempts of Scratch bargaining for Elizabeth’s soul that got old quick – it seemed as if he took her rejection as “convince me,” undermining the show’s overall feminist message.

Despite these moments during which the play fell somewhat flat, the production managed to come full circle as the plot was sandwiched between two poignant monologues, the first by Elizabeth, the last by Scratch. Both characters continued to defy conformity as they questioned the conditions of the given environment they faced.

These two characters, although existing in a world beyond our own, confront audience members with a startlingly human reality: Perceptions can be altered and societal norms are meant to be defied.