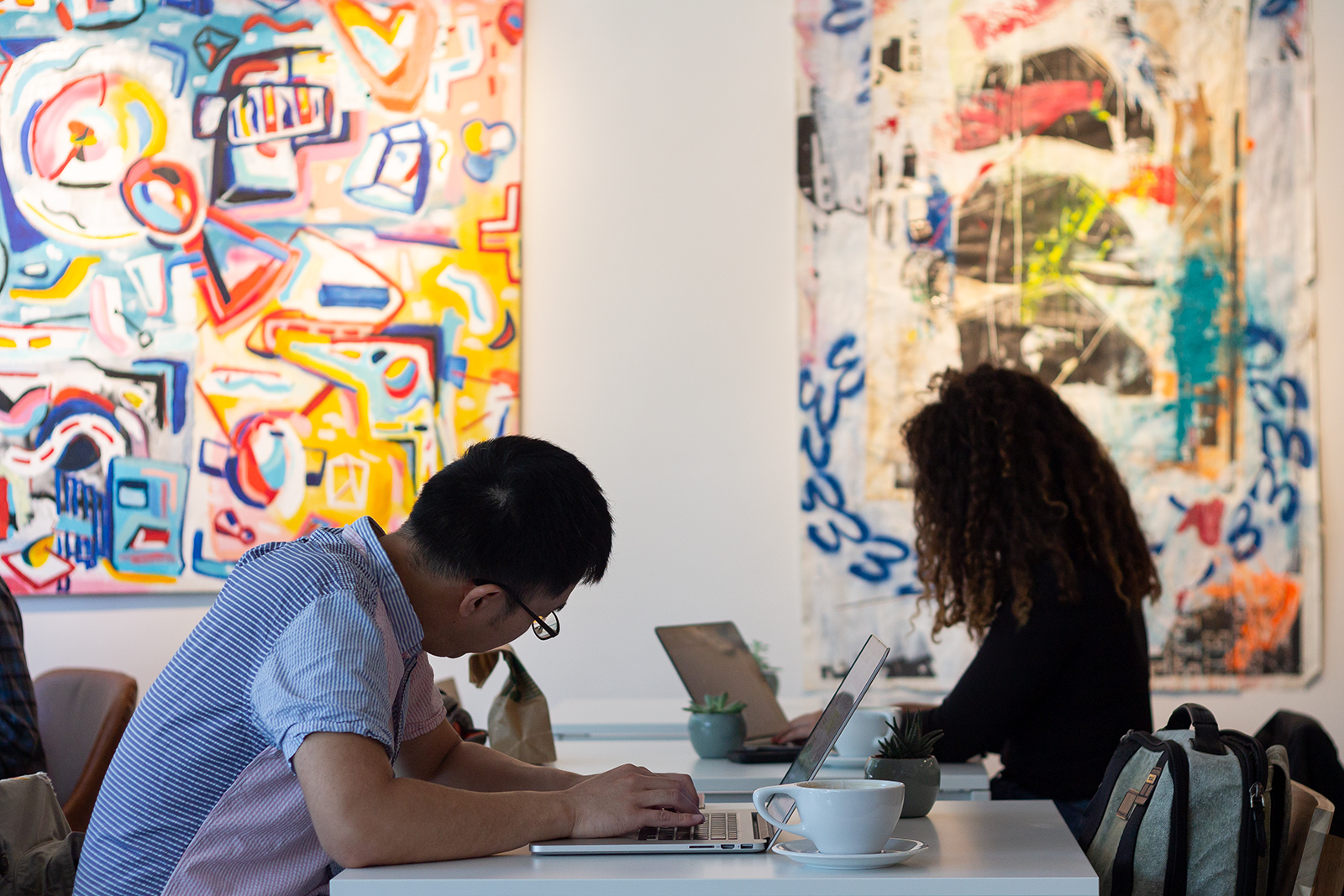 The LA-based non-profit Justice Rising hosted a photo gallery exhibition at Upside Down Café featuring photos of the students they help in Eastern Congo. The organization works to promote secondary education in the country, where they build schoolhouses and hire local teachers to educate children.
(Tess Horowitz/Daily Bruin)

Photos of happy children can have a real impact on awareness of political conflict.

This is the philosophy Nicole Peters, the Strategic Partnerships Manager for Los Angeles-based nonprofit Justice Rising, espoused at a photo gallery exhibition at Upside Down cafe Thursday. Peters hosted the event in which she highlighted the organization’s mission to promote secondary education in Eastern Congo. The nonprofit buys land, builds schoolhouses and hires local teachers to educate local children.

Upside Down partnered with Justice Rising to open a gallery exhibit featuring photographs of the schools and their students in order to raise awareness by displaying artistic images. A coffee shop is not a typical venue for such a gallery, but Peters said she hoped to attract a different crowd than that of their annual fundraiser gala, and inform an audience that might not otherwise be aware of the issue.

“We use these photos to tell our story and advocate for what’s going on overseas,” Peters said. “The Congo has had a conflict going on for 20 years … our hope is to bring attention to that.”

The exhibit is part of a rotation that features a new artist every month, said Isaac Brickner, the director for Upside Down. Though the cafe usually tries to feature local and emerging artists, Brickner said the opportunity to showcase photos of the schools aligned with the cafe’s mission to raise awareness of social issues that affect international communities. Displaying photos of what is happening in Congo, he said, was a way of promoting a cause that their customers might not be otherwise exposed to in their daily lives and environments in the affluent area of Westwood.

“We wanted patrons to encounter something a little more transcendent than their beverage,” Brickner said. “This is a tangible way to bring attention to an issue.”

Peters said she organized the event to invite supporters and friends to check out the gallery, and have the option to make a donation to help foster further development of their projects. Instead of displaying photos that highlight the violence and destruction caused by conflict in the country, Peters said the gallery showed photos of upbeat, friendly kids and adults dancing and smiling. Many of the photos were brightly lit, featuring students both in and outside of their school houses, wearing uniforms and playing soccer.

“On Instagram you get a lot more likes for photos of crying children,” Peters said. “We won’t do that because we feel it’s our job to honor the students and teachers … most of our photos are very upbeat.”

Galleries in the cafe are normally curated by Melissa Moskowitz, Upside Down’s artistic director. Although she has veto rights on the organization’s monthly galleries, she said she found the photos’ high levels of artistry warranted their display. A few black and white photographs highlighted the emotional state of the teachers and students, she said, in which she sees as a great deal of hope. The stark contrasts between the faces of the subjects and their surroundings draws focus toward their facial expressions, she said.

While she was moved by the photos displayed in the exhibit, Moskowitz said more variety in the photographs could have intensified the experience. Including in-progress pictures of the school’s construction would have better illustrated the narrative of struggle that these communities have endured, she said.

“We didn’t see the empty plot of land,” Moskowitz said. “Or the sweat on the laborer’s brow as the school was being built. It might’ve been nice to see that.”

Expectations notwithstanding, Peters said she strongly believes the best way to honor the Congo students is by showing them smiling and happy, despite their painful and difficult stories. The Congo has been the center of political conflict for decades, and Peters said her hope is to bring attention to that without peddling the typical imagery of children suffering. The photographs displayed at Upside Down function for that purpose, she said, and motivate further progress for the aid of future students they help.

“We feel like it’s our job to honor the students, teachers and the people of the stories that we’re telling,” Peters said.