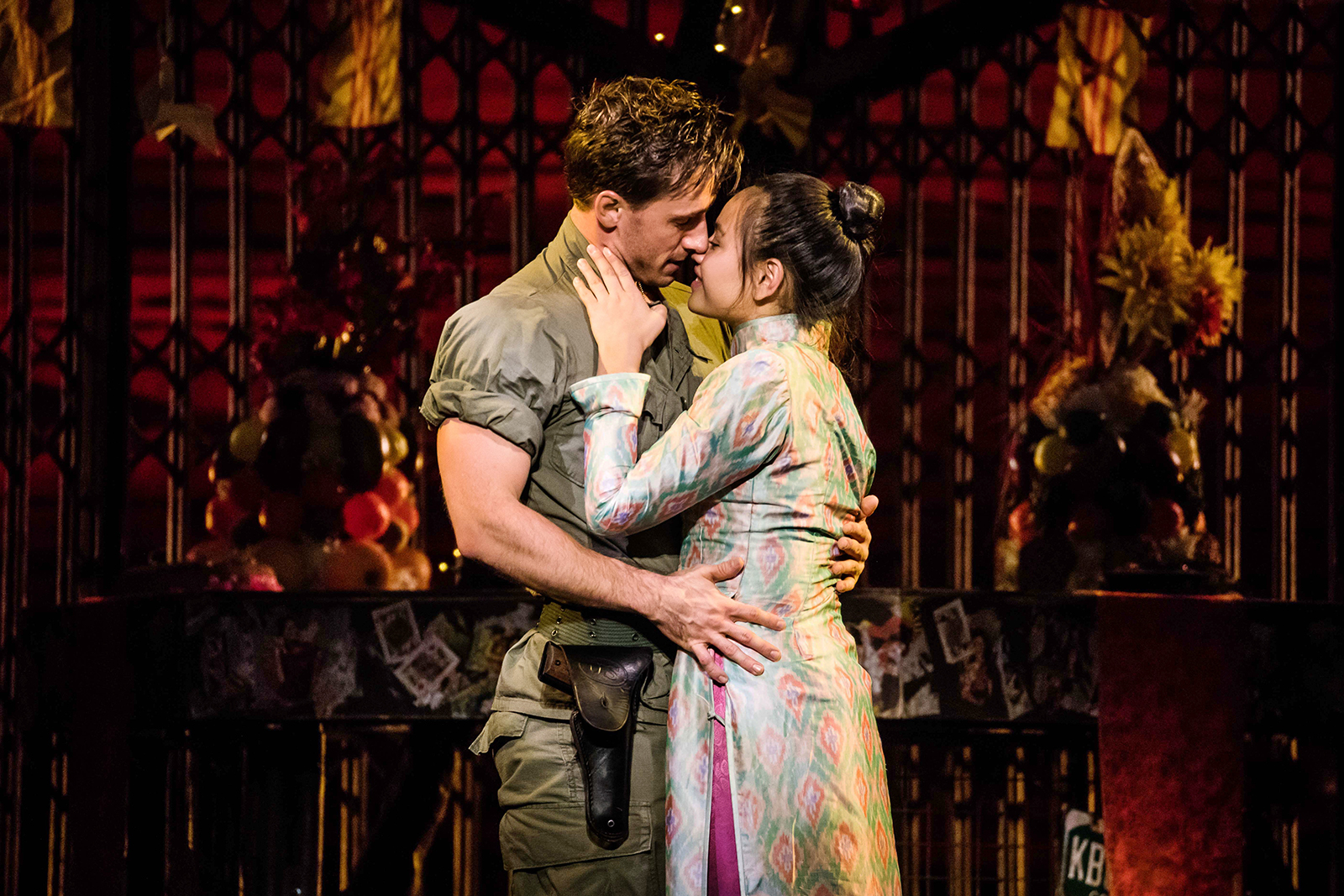 For those expecting a moving, historically accurate account of the Vietnam War, “Miss Saigon” did not deliver.

As showgirls moved across run-down bars and chorus singers clad in bamboo hats rode bicycles across the stage, “Miss Saigon” took audience members through the final years of the Vietnam War. Cameron Mackintosh’s Broadway revival of the 1991 musical “Miss Saigon” will perform its final shows at the Hollywood Pantages Theatre on Sunday.

But instead of highlighting the suffering caused by the civil war and the failed American intervention, “Miss Saigon” brought to the stage the classic tale of a white male savior and an Asian damsel in distress.

This makes the show a tragedy even beyond the musical’s ending.

In the production, choral members meandered across the stage, gyrating their hips and throwing themselves over big, strong soldiers in hypersexualized bar numbers. Vietnamese citizens clung onto Americans, begging for a visa to the West. The Engineer (Red Concepción) spent the entire two hour and forty-minute musical doing everything he could to exchange “Uncle Ho” for “Uncle Sam.” A giant helicopter, a colossal prop caged with barbed fencing, fluttered atop the stage while refugees attempted to scale the metal framework separating them from an escape to freedom. The dancing, characterization and set design romanticized the Vietnam War to the fullest extent possible.

According to “Miss Saigon,” Vietnamese women willingly populated bars and worked as prostitutes. The production also perpetuated the idea that Vietnamese citizens were desperate to flee their own country, a forsaken space compared to the promised West. “Miss Saigon” fails to acknowledge the historical context contributing to America’s presence in Vietnam and the chaos that ensued when the United States left.

America abruptly removed itself from South Vietnam when it became clear its efforts would provide no aid towards the ailing Democratic regime. This left South Vietnam to fend for itself. But “Miss Saigon’s” Western retelling of history could not be masked by its self-dubbed role as the “epic love story of our time.”

The main character’s storyline was rather rushed and almost impossible for even hopeless romantics to believe. Kim (Emily Bautista) and Chris (Anthony Festa) sped through dramatic phrases, failing to clearly articulate each love medley’s lyrical nuances. A dramatic “Why, God, Why?” solo by Chris pondered the ethical implications of America’s involvement in the Vietnam War. Following this, Chris suddenly fell in love with Kim as she unleashed the tragedies of her life: her family’s burnt, charred remains following the bombing of her village and the prostitution job she took on in order to survive. Kim said she’d rather die than face war again, and Chris decided he could save her.

A single spotlight, acting as an incandescent moon, illuminated Chris and Kim as they sprawled on the steps leading up to their bedroom. Her white ao dai basked across Chris, her virgin purity cleansing Chris of his GI sins. And the two professed their love, in what is apparently a moment of musical self-realization.

“How in the light of one night did we come so far?” Chris asks.

His question is never answered. This illogical plot gap remains unfilled by a mere two-song exchange that seemed to symbolize eternal love. And that, in combination with the pair’s incredulous setup – a sudden understanding that Chris’ destiny meant saving Kim – ruins whatever hopeless, heroic romance that could have touched a viewer’s heart.

In fact, the love story that resonates most is not the one shared between Kim and Chris. Her devotion to Tam, their son, overshadows even the devotion she still held for her husband following three years of separation.

Kim swore that she would sacrifice her own life for a chance at a better life for Tam, a promise known all too well for any immigrant, in the musical’s most poignant scene. She clutches Tam as smoke envelopes mother and son. A curtain, ribbed with black fabric painting the endless Pacific Ocean, completes this backdrop: a journey out of Vietnam in hopes of finding a better future for her child. The scene is a sobering piece of reality, a parallel to 2019 refugees crossing North American borders.

It is this narrative, and not America’s haphazard presence in Vietnam, and certainly not Chris and Kim’s ill-fated love affair, that makes “Miss Saigon’s” tale even remotely authentic.

Aside from maternal love, the only culturally-relevant aspects of Miss Saigon reside in the fragments of Vietnamese scattered throughout the musical’s dialogue. When Dreamland’s Bargirls toasted a newly-wed Kim and Chris, they chant “vô,” and when Thuy shooed out militant forces from Kim’s countryside encampment he yelled “di ra.”

When “Miss Saigon” originally opened on Broadway in 1991, protestors picketed outside theaters performing the show. The musical’s original production featured a classic case of yellowface – white actors playing Asian roles. The original Engineer wore prosthetics to change the shape of his eyes and makeup to change his skin color. But over its nearly 30-year history, the musical has evolved: Asian actors now play lead Vietnamese characters.

The revolution does not stop with a diverse cast. It shouldn’t require acute character analysis to understand the strength behind Kim’s sacrifice. At face value, Kim should not be written to be weak. Chris cannot be the only character acknowledging America’s faults in Vietnam. The Engineer’s attraction to the West needs to be contextualized with the deprivation and destruction of his own home.

“Miss Saigon” was a cheap attempt at diverse storytelling. While it might be one of few popular culture products showcasing Southeast Asian refugee narratives, its rarity does not make it real.