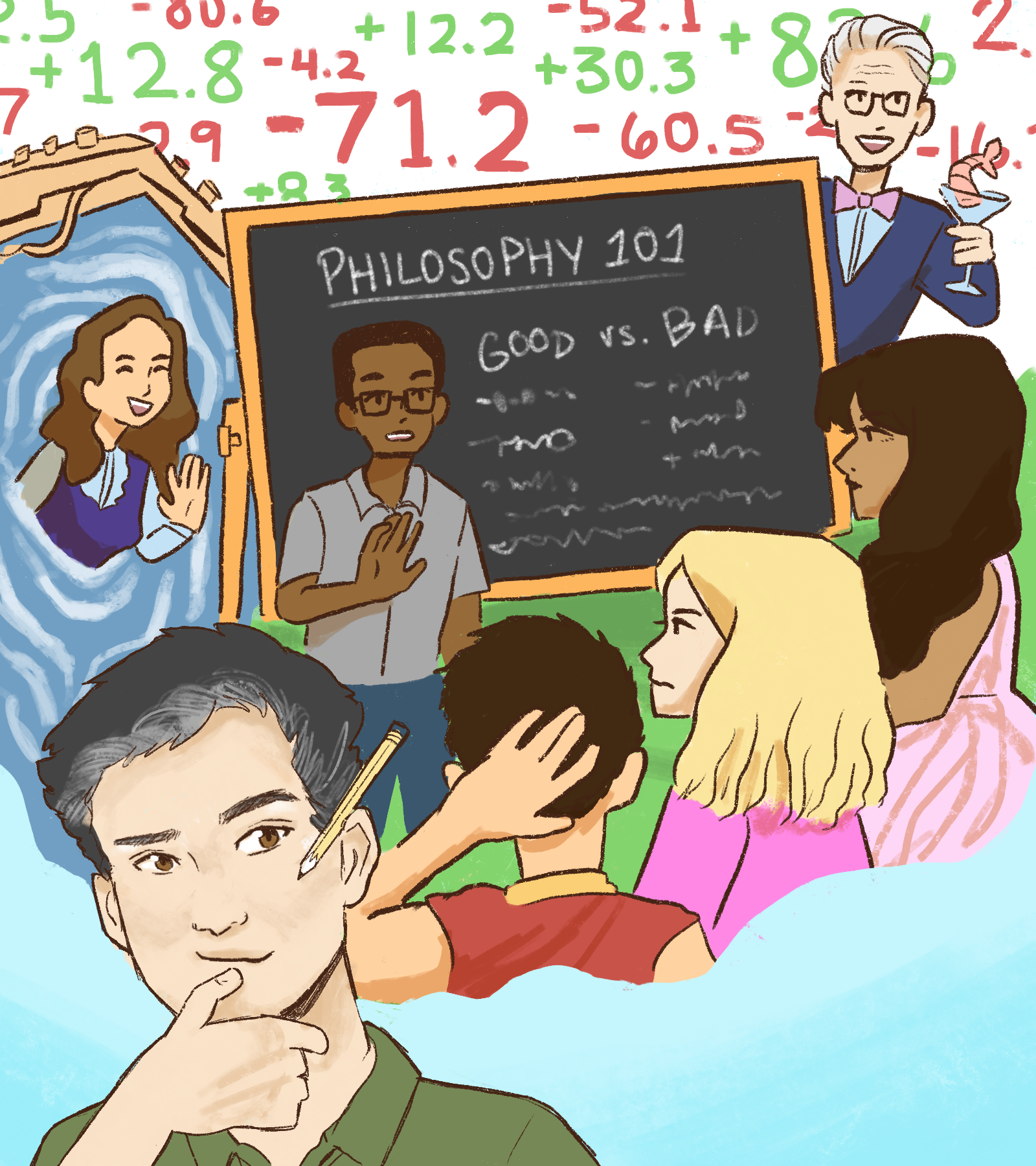 The moral solution of the trolley problem is more difficult when you have to live it over and over.

At least, the writers of “The Good Place” seem to think so.

The NBC series, which earned four Emmy nominations this year, follows four characters who enter the titular “Good Place” after their sudden deaths, but paradise pans out differently than initially expected. While the boundaries between philosophy and science blur throughout the episodes, UCLA alumna Kate Gersten, a writer and producer for seasons two and three, said the show’s unusual afterlife universe helps the writers transform science fiction into comedy.

“The goal was to make these characters feel very real and grounded within the wild world that we created for them,” Gersten said. “The stakes are high for them, it’s life or death – even though they’re already dead.”

But to establish such a grounded world interlaced with philosophical ideas, the team had to go back to school. Writer Christopher Encell said a handful of philosophy professors aided them in their exploration of thoughts posed by the likes of Socrates.

“We’ve had professors come in and hammer in some of the topics we’re trying to easily explain on the show. It’s only 22 minutes,” Encell said. “(We have) to get across Aristotle and Plato’s workings in a way that’s funny and explains to somebody who has never heard of it what it is and how it’s utilized in practice.”

Though “The Good Place” presents a particularly difficult challenge in explaining profound ideas within a limited time, writer Josh Siegal said the sci-fi setting opens avenues to make certain topics humorous. In an episode titled “The Trolley Problem,” Siegal said the show enlisted the aid of UCLA philosophy professor Pamela Hieronymi, who guided the writers through an in-depth lesson on how certain philosophers would have approached the conundrum.

“She walked us through the trolley problem, … how she would teach it to her class,” Siegal said. “If you have comedy in mind, I think you’re immediately thinking of it in terms of, ‘How would this be funny?’ or ‘Through the discomfort of being put on the spot, … in that situation, does (comedy) come out naturally?’”

Comedy then emerges in “The Trolley Problem” as Eleanor, the show’s main protagonist, takes steps to learn how to be a morally good person in order to remain in the Good Place. During one of her lessons, she and the other characters come face to face with the trolley problem through the conjuring of an actual trolley for them to steer.

Life-like apparitions stand in their way, and the characters have the choice to hit multiple people or alter the trolley’s path to hit just one other person. Needless to say, their actions have realistically gruesome consequences because the simulation emulates the deaths of those in the trolley’s way.

Siegal said he imagined the simulated scenario – which does not depict real deaths – through the humorous lens by playing with character discomfort. Chidi, another of the characters, is notoriously indecisive, and he spends precious time panicking and discussing the logistics, often attempting to act after it’s too late.

But the elements of science fiction manage to play a larger role than just making comedic explanations of philosophy. Siegal said the writers often spend time discussing the greater mythology of the show’s universe, passing hours debating topics like whether or not it is possible for a magical train to travel from the Good Place to an area of the afterlife known as the “Neutral Zone.” Having conversations about a fictional world where anything can happen opens doors for the writers to make the content more realistic, he said.

“At most shows, you won’t spend hours discussing off-camera mythology, like where realms are located and how one travels through a portal and whether that would make you nauseous or not,” Siegal said. “But it only ever makes things stronger and funnier to have more tools in your toolbox.”

And while the show is primarily a comedy, Gersten said the premise of “The Good Place” focuses on more than just making people laugh. The series’ lighthearted spirit and deep topics are supposed to leave viewers with smiles on their faces, but also with time to think about the morality behind their own actions as they watch the main characters do the same, Siegal said.

“The thing that I’m most proud of is that where a lot of shows mine their comedy from darkness and bad behavior and what’s worse about people, I think there’s something really refreshing and exciting about people trying to be the best versions of themselves,” Siegal said.