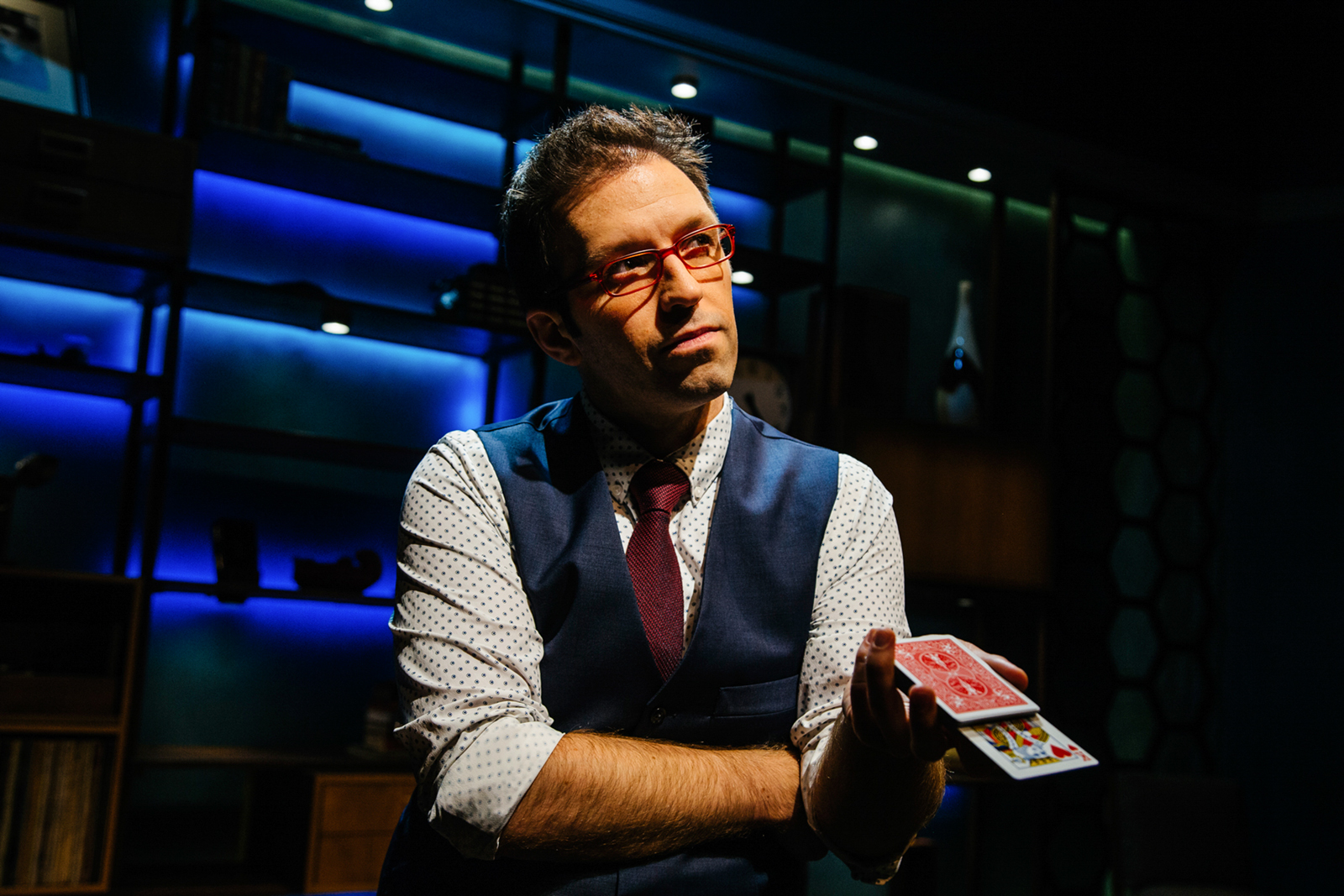 Magician Helder Guimarães balances the mundane and the magical like a sleight-of-hand trick in his one-man show, “Invisible Tango.”

Directed by Frank Marshall, Guimarães’ show will continue its run at the Geffen Playhouse until June 30. Within the intimate Audrey Skirball Kenis Theater, Guimarães invites his crowd to a performance that is part stream-of-consciousness storytelling, part magic show and part philosophy lecture. Combining close-up magic with monologues about how the chaos of life can be interpreted as order, “Invisible Tango” has audience members keep track of far more than a deck of cards.

Guimarães guides the audience through a somewhat clumsy narrative, recalling his quest to discover the owner of an antique notebook while learning about himself. His reflective adventure – involving a mentor, multiple car accidents and a trip to Buenos Aires – often is fragmented. But within the lackluster story are a number of impressive magic tricks adding life to the tale. Cards seemingly appear from nowhere, and Guimarães’ quick hands become the star of the show. When the inspiration sparks, Guimarães doesn’t miss a beat: He smoothly springs into action and involves audience members in his humorous illusions.

Rather than simply relying on sleight of hand or the story’s weak emotional beats, Guimarães wants to challenge his audience intellectually, hoping they ponder questions of destiny, knowledge and the unknown. Laying out cards on a plain wood table while reciting poetry, Guimarães demonstrates both his magical prowess and love of mysterious riddles. In fact, “Invisible Tango” imbues most, if not all, magical moments with a philosophical touch.

Part of Guimarães’ magic grew from a set that came to life around him. His backdrop consisted of wooden shelves against a soft turquoise wall, displaying photos, books and some obscure pieces that fall into the narrative later – like pieces of a puzzle.

Items pulled from hidden drawers seamlessly complemented the imagery of his auditory story. The warm tones of the furniture, soft lighting and the occasional Latin guitar music aided the room in feeling like one man’s homely parlor instead of a theater. “Invisible Tango’s” original soundtrack, scored by the musician Moby, fully immersed audiences in Guimarães’ trip to Argentina and hinted at his Portuguese origins. The environment even included an interactive turntable and vinyls, which Guimarães utilized to cue background music for his tricks.

For those interested in a straightforward magic spectacle, the show’s conceptual core and abstract musings are perhaps heavy-handed. And those interested in a deeply heartfelt performance shouldn’t expect tear-jerking moments of catharsis either. But Guimarães knows how to construct a giddy performance, unafraid to add “an element of danger” to his card tricks through a sharp dagger.

Guimarães’ energetic confidence and animated facial expressions kept the 80-minute show from falling into boredom. While enigmatic at first, the performer’s casual attire – Converse shoes, gray jeans and a suit jacket – and lighthearted interaction with the audience established a personal dialogue. By speaking to the crowd directly, picking participants to help out and standing for most of the show, Guimarães never let “Invisible Tango” feel stale. His energy fed off the participation of the crowd – noting their applause, or lack thereof – with trust being a fundamental aspect of his act.

“Invisible Tango” rests on the notion that the audience should have faith in the magician to conjure moments of surprise and to generate a magic that is both relatable and astonishing. The reciprocal trust arose both from Guimarães’ demeanor and the cozy environment. Yet we are still conditioned to be dazzled, as the audience would tense in anticipation whenever Guimarães would take a break from his story, play a record and say with twinkle in his eye, “Let’s try something.”

“Invisible Tango” may leave attendees confused by the performer’s narrative; revelatory details are often blink-and-you’ll-miss it, and the circuitous nature of his self-discovery leaves many questions. But Guimarães revels in the unknown and hopes – as with his impressive illusions – that you’ll choose the magic of mystery over tedious knowledge.