Concert review: Alec Benjamin lives up to his image with a satisfying amount of angst 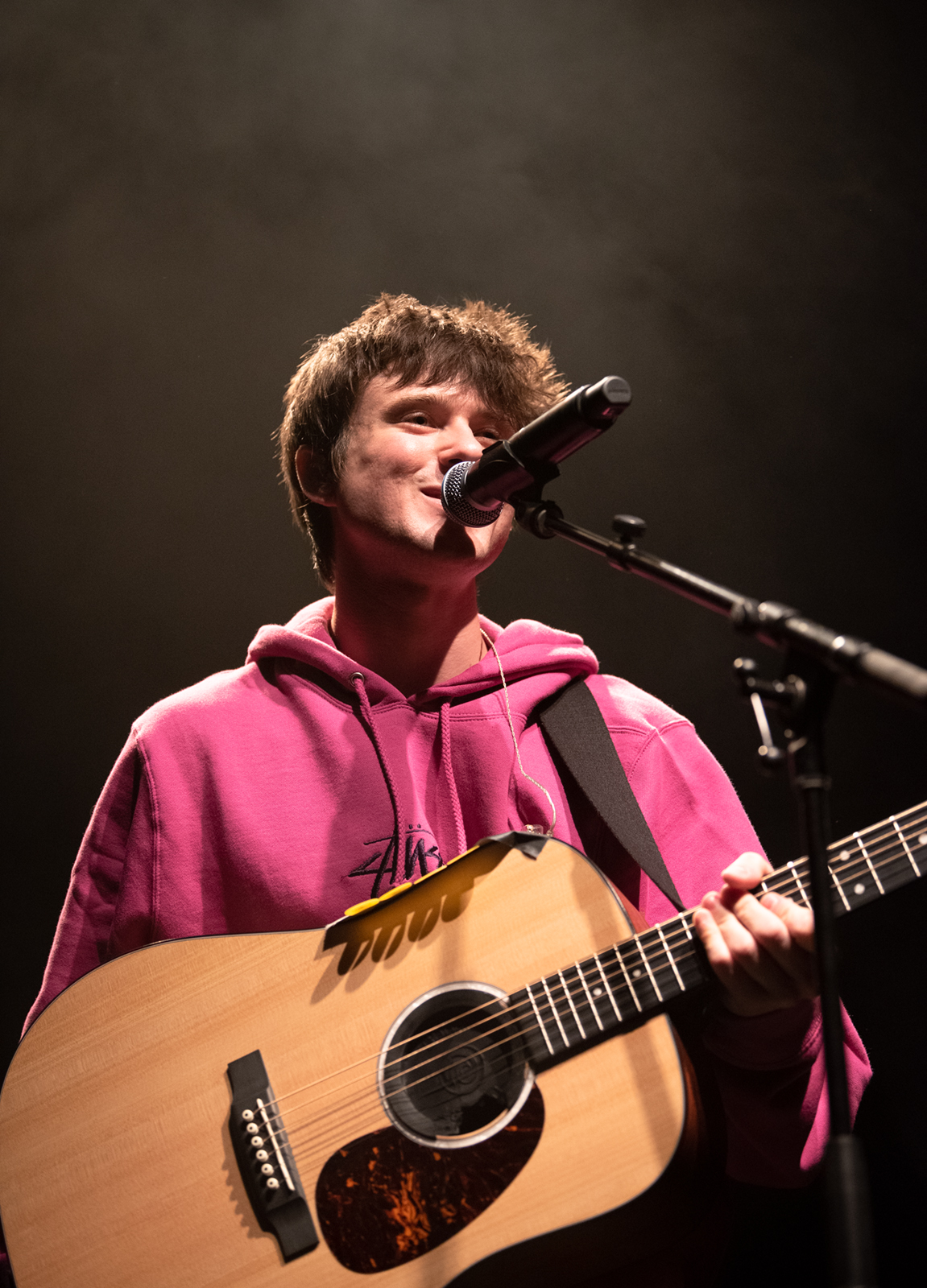 “Let Me Down Slowly” singer Alec Benjamin performed the penultimate show of his Outrunning Karma Tour at the El Rey Theatre on Thursday. (Ashley Kenney/Daily Bruin)

Heartbreak, but then make it casual.

Though Alec Benjamin is only 24 years old, many of the songs on his debut record deal with the loss of childhood innocence and his discovery of life’s less-than picturesque realities. The pop singer-songwriter took the El Rey Theatre stage Thursday, singing over a dozen tracks, including 11 from his album “Narrated For You.” Throughout his show, however, the performer offset the angsty lyrics with conversational prowess and a comfortable openness – and not just because he wore a baggy pink hoodie and neon yellow pants.

His opener, an e-boy named Alexander 23, kicked the night off on a surprisingly experienced note. With only two songs uploaded to his Spotify account, the singer’s lack of musical background could have easily excused a slightly pitchy set, but he instead delivered powerful falsettos between scratchy-yet-soft vocals. Very much in tune with the younger audience, Alexander 23 marked the beginning of one song with the classic air horn effect, while another track discussed “high school friends and high school lovers.” Though visibly a bit uncomfortable when introducing songs, his solo act set the tone for a show focused on connecting with the audience.

Benjamin later emerged with an acoustic guitar, a drummer and a keyboardist. His first song, “Outrunning Karma,” however, relied heavily on a high-volume backtrack. The song’s recorded chorus effectively drowned out the artist’s live vocals and called into question how genuine the rest of the show would feel.

Thankfully, he performed “If I Killed Someone For You” with a much less contrived presence, as his youthfully light vocals shone through. With the attention now on his live sound, Benjamin sang about the inherent evil in expecting another person to change themselves in order to earn love. His disillusionment began on a high note – higher than his own vocal range – with the two negative tunes.

Taking a moment to address the audience, the singer introduced his next song as one he wrote about his relationship with his sister. Benjamin jokingly acknowledged that only the first and third verses of “If We Have Each Other” actually connect to his sibling, as the second one refers to a 90-year-old couple. The other verses also mention his family growing up, with one lyric acknowledging that Benjamin’s sister helped him through the emotional struggles of high school.

During another song, the performer taught his packed audience a short sequence of notes through a call-and-response moment. As the audience wailed the sounds off-key, Benjamin sang “Anabelle’s Homework,” which follows the singer as he completed a girl’s assignments in hopes of keeping her attention. Though the lyrics feel juvenile at first glance, they worked well with his soft voice and elicited a sort of nostalgic pain only felt at the peak of teenage anxiety.

Balancing childlike fantasy with tragic subtones, “I Built a Friend” captured the excellence of Benjamin’s style. The song follows a child who builds a robot and then leaves for college, only to find the robot had committed suicide out of loneliness. With an unrealistic premise, the song still engaged the audience, who sang the chorus as Benjamin held out the microphone.

Shortly after, however, Benjamin let the audience know he had a surprise. As he prepared to sing “Death Of A Hero,” he called out for a well-known fan of his to come on stage. The audience screamed in response to the new man on stage holding a white electric guitar – easily the loudest cheer of the night.

“Either you really like John Mayer, or you don’t like me,” Benjamin said to the crowd’s elation.

Mayer’s guest performance made the show feel even more casual, as the two bantered about Tinder and their distinct height difference before jumping into the songs. After the duo performed stripped-back versions of “Death Of A Hero” and Mayer’s “Slow Dancing in a Burning Room,” Mayer left the stage. Benjamin then discussed the lyrics of the former song, explaining growing up leads to the realization that heroes are fake. Yet, he said that song ironically led to him performing alongside Mayer – his own hero – Thursday night.

Toward the end of his set, Benjamin performed “Water Fountain” and “Let Me Down Slowly.” The first song, despite featuring bouncy rhythms, fell flat live as it drew out the schoolboy narrative a bit too heavily. With the lines “She told me that she loved me by the water fountain” and “But now she’s got a cup with something else in it,” he evoked contradictory elements of fifth grade water fountain meetups with high school parties.

But he closed out the show with a fan-favorite, “Let Me Down Slowly.” A drearily slow song, it would have been an odd choice for closer, but it instead engaged the audience through repetitive, chantable lyrics.

And with that, Benjamin’s performance at the El Rey Theatre, though at times angst-filled, perfectly captured the singer’s relatable and quirky personality. After all, isn’t that what fans came to see?