Theater review: ‘The Niceties’ examines emotional fallout and complexity in conversations about race 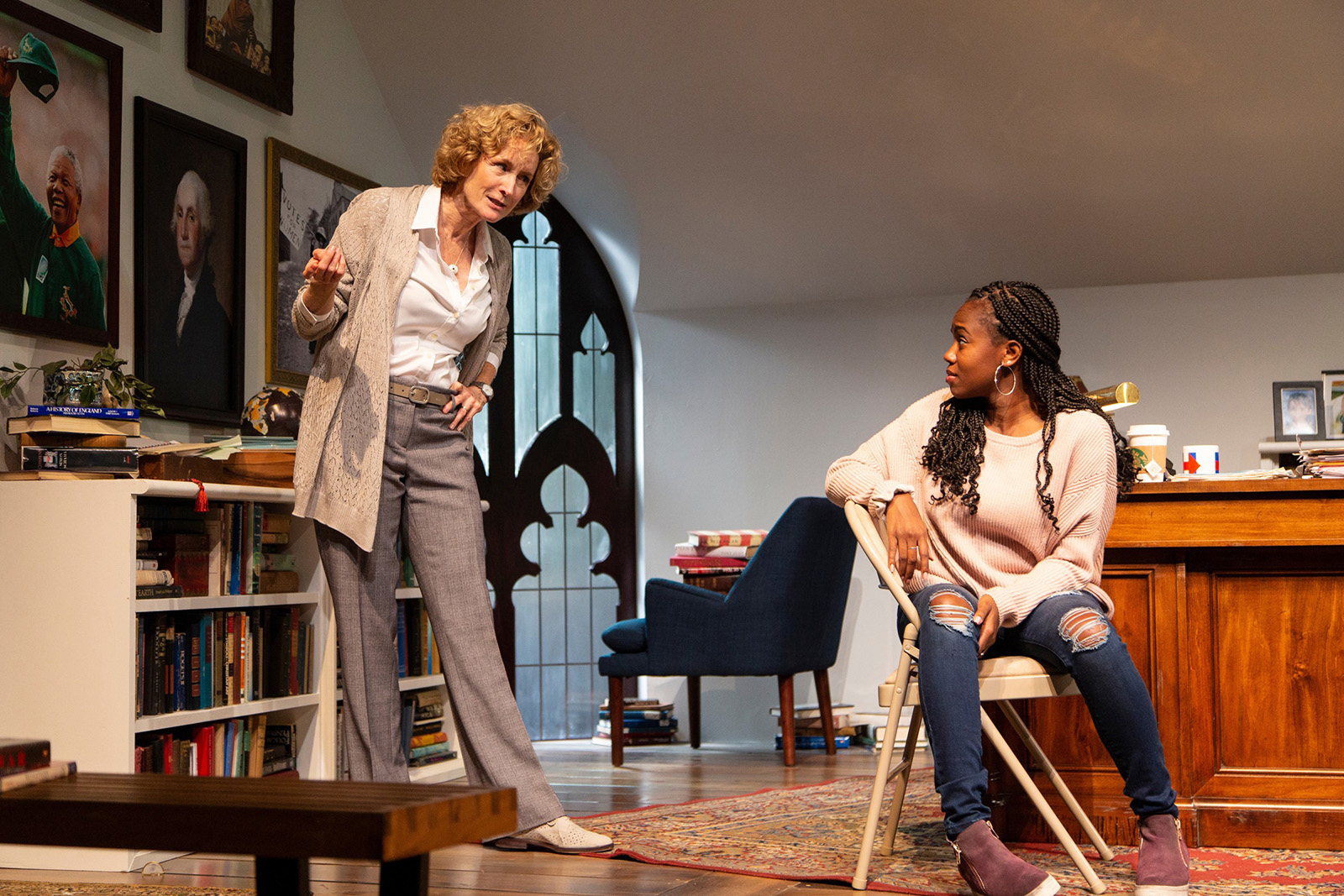 Ever have an intense conversation with a professor during office hours?

Politely asking for a grade change or feigning interest in their research for a recommendation letter might yield awkward encounters, but it surely can’t top “The Niceties.”

The play, which will run at the Geffen Playhouse until May 12, follows university student Zoe Wood’s (Jordan Boatman) conversation with her history professor Janine Bosko (Lisa Banes) during her office hours. Their initially innocuous discussion regarding an essay assignment on the American Revolution slowly but steadily derails into a heated debate regarding racism and privilege in America.

Both Boatman and Banes impeccably portray their characters’ archetypes. Boatman gives an impassioned portrayal of Zoe, a black millennial student who is an outspoken supporter of causes that affect people of color. Boatman convincingly delivers Zoe’s quibbles and objections to Janine’s criticism as a righteous student who must remain composed in her professor’s presence. Her costume, consisting of distressed jeans and a stylish white sweatshirt, further emphasizes her role as a student with a bold, if not idealistic, vision for the world.

Meanwhile, Banes is a perfect fit for Janine, an esteemed white university professor who is confident in her past experience and expertise. Banes boasts the elevated voice of an inspired historian, walking the fine line between sounding intellectually stimulating and unintentionally condescending. She conjures an intensity without yelling, while her costume’s grey palette topped with a long flowing cardigan authentically imitates a university professor’s clothing. Though both Zoe and Janine are meant to be representative of broad demographics, Boatman and Banes’ nuanced performances keep them from verging into stereotype.

Though audiences will inevitably find themselves siding with either Zoe or Janine, the script forces viewers to confront the pair’s equally valid ideas, which writer Eleanor Burgess cleverly introduces through the natural progression of Zoe and Janine’s debate. The script expertly ties together humor with historical facts that could be fodder for political debate to instead create genuine dialogue. Zoe and Janine’s age, race, gender and culture are artfully woven into an overarching debate regarding history. For instance, Janine’s upbringing in a family of Polish immigrants seeking asylum from Hitler’s regime raises questions about the idea that privilege can simply be boiled down to race.

Director Kimberly Senior makes particularly good use of the simple stage set: Janine’s office. With numerous portraits of historical figures – such as George Washington – framed on the walls and shelves filled to the brim with history books, the room exudes comfort for Janine while simultaneously serving as unknown territory for Zoe. The seating emphasizes the unbalanced atmosphere, with a folding chair and austere bench for Zoe and an ergonomic rolling chair for Janine. Even their movements within the space indicate their delicate relationship, with Janine remaining behind her desk and Zoe lingering near the exit door and occasionally approaching Janine.

Zoe and Janine’s escalating conversation keeps the audiences engaged, as the debate repeatedly edges close to personal and offensive territory. Their highly tense academic dispute eventually erupts into a fierce argument, providing a thrilling conclusion to the first act.

As Zoe reveals she will be protesting Sandra Day O’Connor’s appearance on campus, Zoe and Janine restrain themselves by logically appealing to the retired Supreme Court justice’s political record. Despite their attempts to be open-minded, they appear visibly astonished, if not outright offended, by each other’s positions. It’s one of many scenes that do an excellent job demonstrating the complexities of racism, with two like-minded women in fierce disagreement over who merits admiration in American history.

The second and final act, which takes place three weeks after the first, opens with a slightly heavy-handed attempt to create a resolution between Zoe and Janine. Additional information is revealed about their backgrounds to make them appear more or less relatable, but feels contrived in comparison to the nuance of the first act. Perhaps it was an intentional decision to make Zoe and Janine’s apologies feel forced, as the apparent facade of mutual empathy quickly erodes and their debate escalates once again. But the play swiftly picks up from where it left off, becoming increasingly spiteful while still providing incisive commentary.

Despite the second act’s rocky start, Boatman and Banes continue to shine in their subtle displays of their argument’s emotional toll. Janine is initially cautious, yet quickly becomes frustrated with Zoe, taking more personal jabs at her. Zoe, on the other hand, begins the act humbled by privileges she had not previously acknowledged, such as her middle class upbringing and the opportunity to attend an elite university. The pain Zoe and Janine share from their first argument invokes sympathy about how destructive such conversations can be.

Though the repeated escalation of their argument admittedly feels reminiscent of the first act, the debate manages to explore more perspectives on the issue. For instance, a major source of conflict in the second act is determining how diversity can be realistically attained in academia.

The diverse range of perspectives Zoe and Janine explore are effective in highlighting contemporary race relations in America, where discussions can quickly become emotionally charged. Such issues regarding race and privilege are obviously complex, which the play openly accepts. But rather than displaying an unrealistic resolution to the characters’ underlying debate, “The Niceties” instead invites conversation, while refusing to shy away from the painful aspects of discussing race.

While “The Niceties” is not perfect in organically introducing various perspectives on such issues, it sparks a conversation desperately needed in America today.