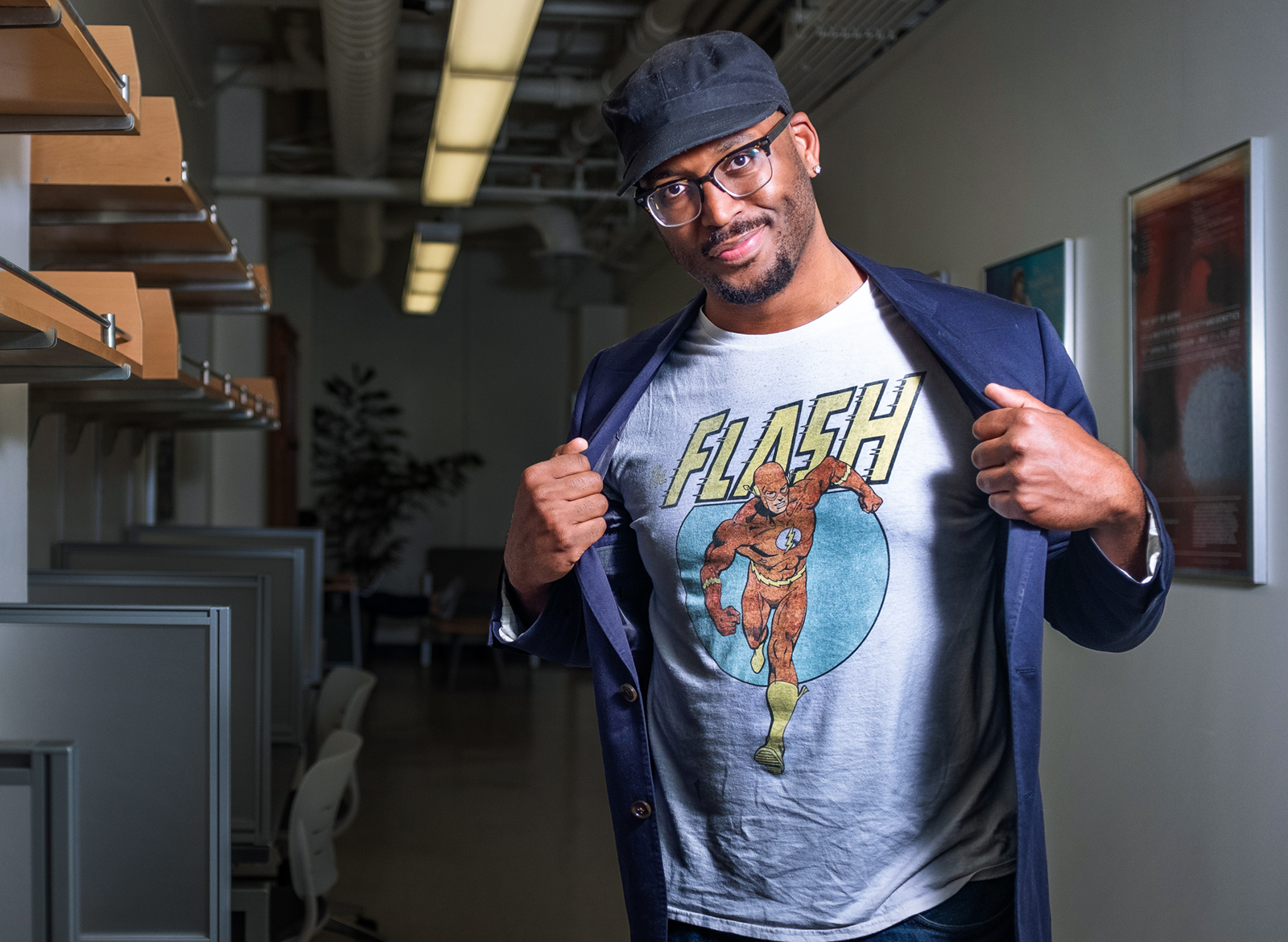 Shane Campbell-Staton, an ecology and evolutionary biology assistant professor, co-hosts the “The Biology of Superheroes Podcast.” Campbell-Staton said he uses superheroes and their powers to understand the overlap between biological reality and futuristic fantasy. The podcast has covered topics such as Spider-Man’s web-slinging and The Walking Dead’s zombie apocalypse. (James Schaap/Daily Bruin)

Thanos had to break a few laws of nature before he eradicated half of the universe with a snap.

Topics similar to the Marvel villain’s defiance of physics are addressed in “The Biology of Superheroes Podcast,” hosted by Shane Campbell-Staton, a UCLA ecology and evolutionary biology assistant professor. What originally began as a two-week course at Harvard University developed into a podcast and a full academic course at UCLA titled Ecology and Evolutionary Biology M157: “Biology of Superheroes: Exploring Limits of Form and Function.” In both his class and podcast, Campbell-Staton said he uses superheroes and their powers to examine the meeting place between biological reality and futuristic fantasy.

“All these fantastical ideas start with (a) premise that we can very easily explore in our own universe,” Campbell-Staton said. “And then from that starting point, you can say, ‘How do we go beyond (the) limitations to get to what we see on these pages?'”

Even though he was not interested in comic books as a child, Campbell-Staton said they became his guilty pleasure in graduate school after he bought his first comic, “Superman vs. Muhammad Ali.” As he read stories about heroes such as the Flash and the Hulk, he eventually began to wonder which biological theories could explain their abilities. After reaching out to longtime friend and podcast co-host Arien Darby, Campbell-Staton decided to discuss his questions and ideas on a public platform.

The podcast has covered topics such as Spider-Man’s web-slinging and The Walking Dead’s zombie apocalypse. Campbell-Staton is more responsible for the science side of things – finding research related to superpowers and reaching out to fellow scientists to guest-star. For example, Sheila Patek, an associate biology professor at Duke University, was recently featured on the podcast to discuss the biomechanics behind Iron Fist’s martial art abilities.

Meanwhile, Darby, a lifelong comic book fan, adds superhero knowledge to the podcast. Darby said he also contributes humor and pop culture commentary to balance the podcast’s more science-heavy segments. In episode 10, Darby gives a personal account of his taekwondo training and how his childhood self would envision fighting enemies alongside the Iron Fist.

“We joke with each other throughout the episode,” Darby said. “But at the same time, we really are focusing on delivering some hard-hitting science and grounding conversations that we have in the actual theory.”

As a scientist, Campbell-Staton said it is easy to be critical of the biology depicted in comics due to its fantastical nature. But once he steps out of his scientist shoes, Campbell-Staton said he views the unnatural phenomenon of superpowers as an entryway into analyzing biology that already exists in the universe. Despite his obvious inability to travel throughout the multiverse, Campbell-Staton said the notion of parallel universes with distinct characteristics raises questions regarding the roles of fate and chance in evolutionary history.

“(‘Spider-Man: Into the Spider-Verse’) just came out (and) deals with those same concepts,” Campbell-Staton said. “So we can use that as a thought experiment in the same way that scientists use thought experiments all the time to approach really complex thoughts.”

While the podcast is publicly available online, its academic counterpart was only available to 80 students during winter quarter. Lisa Anderson, a fourth-year biology student, said the class combined her passion for superheroes with her course of study, as each lesson was based around one character and the biological theories related to his or her abilities. For example, as a means to understand the effects of aging on regeneration, Anderson said the class once focused on Wolverine’s rapid healing ability.

Joshua Kim, a fourth-year biology student, said Campbell-Staton would provide background of a hero’s origin and powers for students who were not familiar with the comic narratives. Kim said it is uncommon for science classes to cover topics from pop culture, so Campbell-Staton’s use of superheroes to teach biology was refreshing.

“(The class) seemed more unique than just like a normal biology class, like plants or marine bio. … Something about superheroes (doesn’t) really come across that often,” Kim said.

Campbell-Staton said his class and podcast allow him to delve into more fields of science than he typically encounters as a biologist. Investigating the stories of Cyborg and Vision required him to conduct research on the current state of artificial intelligence, while the advanced mechanisms of the Terminator encouraged him to determine the current state of the world’s cutting-edge technology. Running the podcast has broadened Campbell-Staton’s scientific knowledge, he said, but it has also helped him connect biology to the social world.

“(The podcast) helps me step out of my own scientific brain and step into the real world,” Campbell-Staton said. “It helps to bridge science and society.”