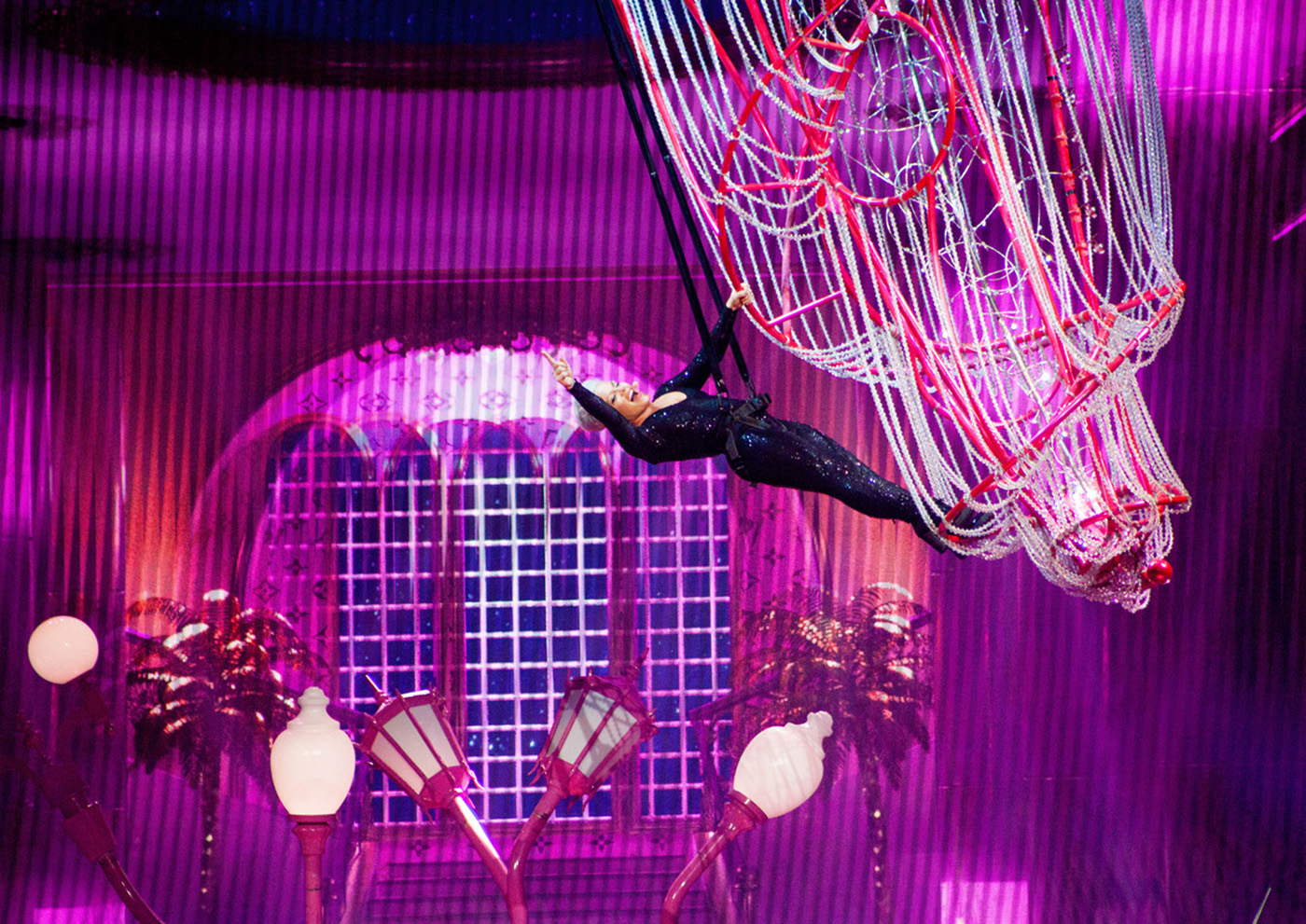 P!nk performed at the Staples Center on Monday as part of her “Beautiful Trauma” tour. Aerial stunts accompanied her performance – the pop artist entered the stage on a suspended chandelier wearing a sparkling, black bodysuit while flipping and twirling mid-air. (Mia Kayser/Daily Bruin staff)

Decadent runs and fully charged instrumentals flew through the air Monday night – and so did P!nk.

The career pop artist performed at the Staples Center as a stop on her “Beautiful Trauma” tour. The tour follows the release of her 2017 album of the same name. While P!nk has been a household name since the ’90s, aerial stunts accompanied by unshakeable vocals gave reason as to why she can still pack arenas nationwide.

Before P!nk graced the stage, pop artist Julia Michaels attempted to ignite the night. Fitted in a polka-dot sundress and tennis shoes, Michaels performed a mix of original songs and tracks she wrote for other artists, such as her top single “Issues” and Justin Bieber’s “Sorry.” Even though she proclaimed enthusiasm of performing at the Staples Center, her immature vocals indicated she wasn’t yet ready for a stage of this magnitude.

Often drowned out by the band, Michaels’ falsetto-heavy numbers failed to reach the depths of the stadium. When Michaels’ voice did find an optimal balance with the instrumentation, her inability to hit higher notes became apparent instead. But the singer’s underwhelming set was quickly erased by the spinning discs of KidCutUp, a DJ who enlivened the arena with singalong throwbacks, such as Montell Jordan’s “This is How We Do It” and Cyndi Lauper’s “Girls Just Want to Have Fun.”

As a reminder of her pageantry and playfulness, P!nk entered on a suspended chandelier in a sparkling, black bodysuit while hot pink bellhops, luggage carts, and a hotel lobby background dressed the stage. She delivered unwavering vocals throughout her opening number, “Get the Party Started,” all the while flipping and twirling in mid-air.

An intricate dance number and lampposts on wheels joined the stage during her performance of “Beautiful Trauma,” one of the few newer songs peppered throughout her set. Following her title track, P!nk strutted downstage in a vampirical black and pink coat to the first of many energy-ridden throwbacks of the night, “Just Like A Pill.” Through headbanging and cardio-inducing choreography, P!nk revealed there was no limit to the amount of intensity she could radiate from the stage.

As a precursor to a song called “Revenge,” P!nk played a short comedic cartoon that depicted fights between lovers. She then took to the sky once again, joined by dancers fighting with life-sized bobbleheads. Although the Real Slim Shady didn’t sing his verse in person, a humongous inflatable look-alike mimed along. This larger-than-life figure would normally distract, but P!nk’s relentless draw for the limelight always pulled back the audience’s eyes.

P!nk also masterfully executed a rendition of “Secrets” during an intricate and nerve-wracking aerial silk routine performed with a background dancer. Poised at a height that could prove fatal, her progression of risky stunts diffused a mixed sense of nail-biting anticipation that is often reserved for circus acts. Despite hanging upside down and spinning in circles, her vocal performance remained concrete, demonstrating her experience and control.

Soon after, the stage came back to life in the form of a dark forest through an eerie, wooded background, a single large-scale tree and a multitude of props. Leaves fell from the ceiling and dancers with elaborate, deep-hued costumes and animal masks prowled around the stage. Entering with a willful jaunt, P!nk belted “Try” while dressed as a dark garden fairy. The imaginative, lush scenery served as the pinnacle of visual artistry for the night, with P!nk effortlessly resting as the dark, yet gleaming apex.

Trading fairies for flames, P!nk lit the stage with pillars of fire during her performance of “Just Like Fire.” She then played a short biographical film depicting her career of activism for marginalized communities. Subsequently, a lightning-filled animation accompanied P!nk’s “What About Us,” flooding the room with emotion as she and her dancers depicted scenes of strife and turmoil through a contemporary dance number.

Although P!nk’s enthusiasm never subsided, the second act of the concert featured a series of intimate, stripped-down performances. Ballads such as “Barbies” and “F**kin’ Perfect” pulled away from the theatricality of previous numbers, though honestly left something to be missed. P!nk introduced “Raise Your Glass” with a heartfelt account of her daughter Willow’s difficulty with self-confidence in her physical beauty. After discussing her own experiences with being seen as too masculine and unattractive, P!nk invited her daughter to dance alongside her to an instrumental interlude during the song.

By this point, her set mirrored the adrenaline-filled highs and satisfying lows of a rapid roller coaster. The final high of the night would come in her performance of “So What” as she somersaulted through the air yet again. As she soared throughout the entirety of the stadium, from section to section, P!nk exclaimed that she is still a rock star.

Wearing jeans and a white T-shirt, P!nk closed with “Glitter In the Air.” She left the stage with a final lyric to summarize the evening, “Will it ever get better than tonight?/ Tonight.”