Pop-up review: With mishmash of unrelated exhibits, the Egg House isn’t all it’s cracked up to be 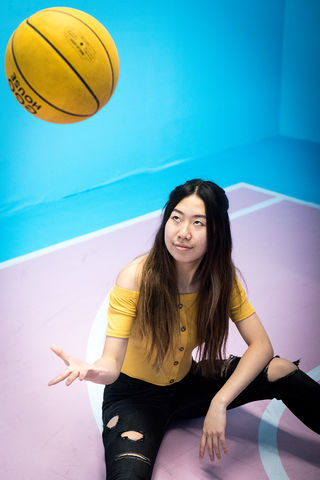 The latest pop-up on Melrose Avenue takes the egg out of egg-cellent.

The first Egg House opened in New York City in 2018 and from there traveled to Shanghai and will now be in Los Angeles until April 28. However, on a street already filled with plenty of Instagram-worthy backdrops, the attraction does not add a particularly compelling element. Although its unconventional theme of eggs plays well with the trendy vibe of Melrose Avenue, its lack of coherence sticks out like a sore thumb.

Walking into the Egg House, each individual exhibit has its own merits. They are interactive and colorful, with every shade of pastel, and of course, gram-worthy. Inside one of the rooms, visitors can find enlarged eggs in miniature shopping carts which line a room wallpapered in various egg patterns. Another room has a pink and blue basketball court featuring egg yolks as balls to be slam-dunked by visitors, while across the hall artificial eggs are cracked in half and turned into chairs beneath a shining Hollywood sign hanging on the wall.

Out of all the rooms, the ball pit steals the spotlight. Rather than a simple ball pit for visitors to swim around in, the Egg House creates an egg hunt out of the activity. People can search for a golden egg hidden among hundreds of white and yellow rubber balls. The golden egg can later be traded in for Egg House merchandise, which includes a variety of trendy phone cases, enameled pins and egg-themed socks. The prizes, which can also be purchased, call to a recent trend of materialism and the search for the perfect “aesthetic.”

While each display room has eye-catching colors and props, they feel oddly separate with a lack of connection from one exhibit to the next. On the lower floor, a blue room with two swings is adjacent to a strange room with vividly yellow pool noodles jutting from light pink walls. The Egg House then feels like a lesser version of the Museum of Ice Cream: the ball pit is a poor imitation of the sprinkle pool which carries the same concept only with plastic sprinkles. Meanwhile, the pool noodle room tries to employ pleasing pastel colors, but this was also done before by the ice cream pop-up.

Another room further incorporated eggs, but under the larger concept of brunch, once again alluding to current trends. “Brunch Babes” shines as a neon pink sign boxed off in palm tree wallpaper. People can pretend to eat miniature plastic toast or bacon patterned felt with a choice of fake milk or fake orange juice. The brunch theme gives the Egg House authority to sell merchandise that is only tangentially related to eggs, like avocado phone cases or toast key chains.

A solar room display featured three planets hanging from the ceiling with a giant inflatable sun at the center. The room was poorly thought out and lacked a connection to the overall egg theme. The same could be said of the black-and-white Route 66 exhibition: save for the “Egg-Shell” gas station, the room was a photo shoot opportunity with no other clear association with eggs.

Amid rooms that either make little sense and feel like they were slapped together in a matter of minutes, sections of the Egg House can only be described as unfinished. Colored sheets hanging from the ceiling have no clear purpose, and accidentally walking behind an unlabeled curtain means running into the storage areas.

“Photo shoot opportunity” is then the perfect descriptor of the Egg House. It is a place that offers the perfect backdrop for any Instagram feed that needs a little spice. However, it does not fully live up to its theme with rooms that possess no true association with the beloved breakfast food.

[RELATED: Viewers can immerse themselves in giant food displays at interactive art exhibit]

The exhibits themselves are sparsely related, but even more so the Egg House features an excess of blank, underutilized space. There were spaces in the building that could have easily promoted another egg-themed exhibit, but instead, one finds themselves walking through blank spaces of an otherwise industrial building.

The Egg House in LA takes advantage of modern social media culture. Each room is photo-ready and guaranteed to gain likes and retweets. Overall, however, it lacks substance. The atmosphere feels manufactured and for $34, there are better places in LA that provide memories that last longer than an Instagram photo.