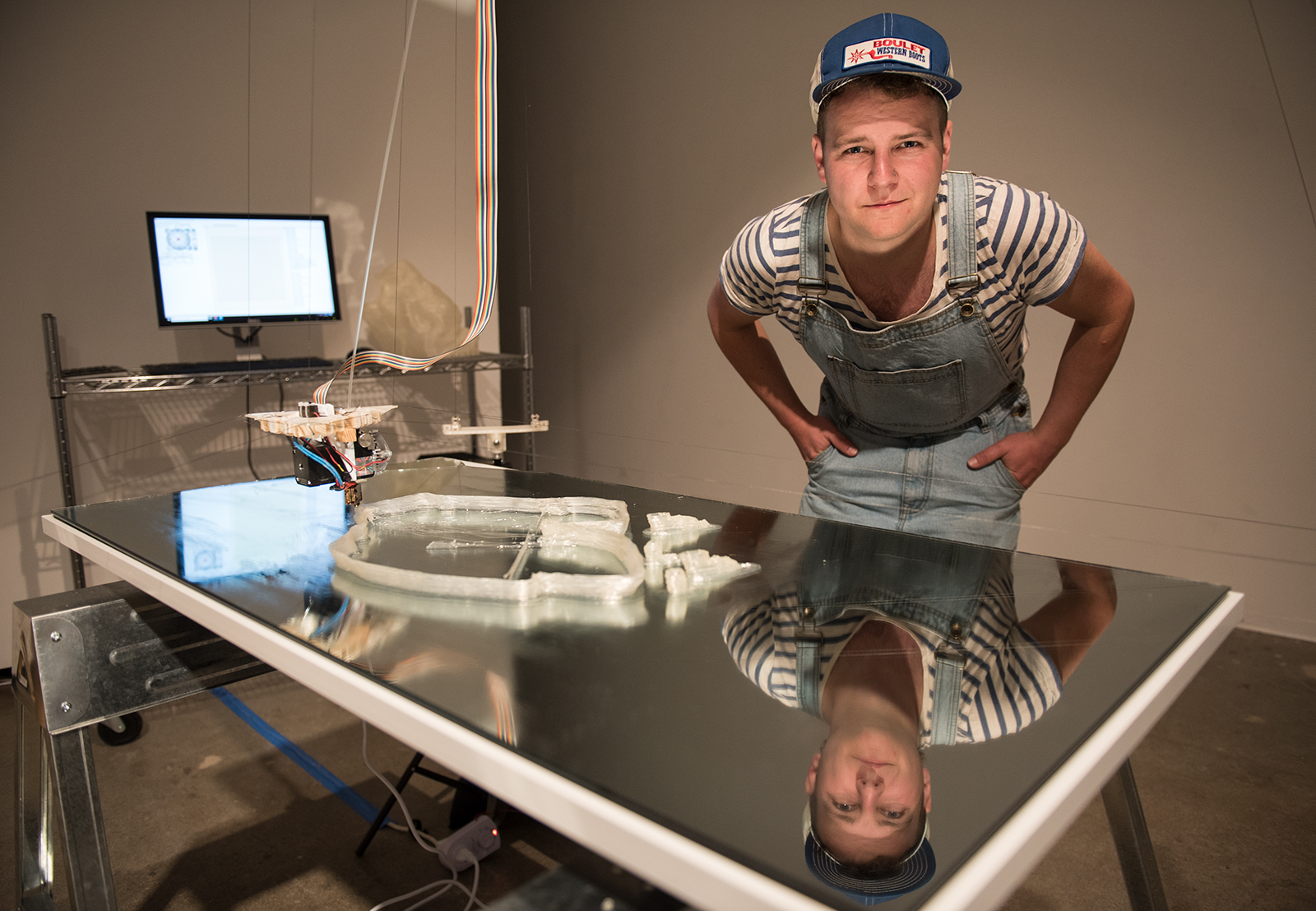 Ben Lerchin used 3D printing technology to create works for their exhibition titled “Spatial Erratic,” which is part of a series of exhibitions by graduate students. (Niveda Tennety/Daily Bruin)

Ben Lerchin uses 3D printing technology to explore the relationship between humans and nature in their solo exhibition.

The exhibition, entitled “Spatial Erratic,” is part of a series of exhibitions by graduate students in UCLA’s department of Design Media Arts. Lerchin said the title is a play on “glacial erratics,” a geological term used to describe large boulders transported by glaciers to a landscape they don’t fit into. Open Tuesday through Thursday at the Broad Art Center, “Spatial Erratic” relates the human body with ideas connected to the dynamic rocks, Lerchin said. By utilizing 3D printing, the exhibition creates an intersection between environments and the technology Lerchin uses to recreate them.

“This project has really forced me to look at human relationships with the landscape that constantly encourage the need to develop strategies for recognizing it as a fluid relationship,” Lerchin said. “Things that we might have called nature are hardly that anymore, because our reach has broadened so far.”

Lerchin’s exhibition consists of several different elements that utilize technology to merge the human form with their artwork. The first piece of the exhibition is a pair of 3D-printed legs standing atop shards of a broken mirror as an orange construction light flashes in the middle of the structure. A full-length mirror with jagged edges will also accompany the piece. Lerchin said the mirror serves as a literal reflection of the viewer to inspire thoughtful meditation on where an individual stands within an artificial environment.

The centerpiece of the exhibition is a 3D printing apparatus that will construct a full-size boulder throughout the duration of the exhibition. Because the piece is ongoing, the boulder will be at different levels of construction based on how long the exhibition has been open, Lerchin said. Although a monitor will display the completed print, not all dimensions of the form will be seen, showing the limited perspective of the machinery attempting to capture a natural environment.

“‘Spatial Erratic’ is an accumulation of sedimentary flows extruding a plastic landscape,” said Emily Martinez, a former collaborator. “The kinetic sculptures consider the landscape as body and the body as landscape.”

Elements of the human form will be incorporated into the piece to further the concept of a hybrid between humanity and nature. For example, a part of the 3D print may simply appear as a rock, yet upon further inspection turn out to be a stomach, Lerchin said. By doing so, Lerchin figuratively merges the human body and the boulder in order to show the intimate relationship between the two subjects.

Looking at nature from a technological perspective has been a common theme in Lerchin’s past works, “Thousand Yard Stare” and “Aggregate Vision,” Martinez said. In the pieces, Lerchin uses a camera to capture the environment in seemingly unreadable, glitchy ways by constructing the image in slits rather than a cohesive panoramic, she said. By fabricating environments, Martinez said Lerchin’s latest work continues to play with landscapes while combining the human element.

“But (‘Thousand Yard Stare’ and ‘Aggregate Vision’) decenter the human perspective,” Martinez said. “There’s this way of framing, but it’s human-centric. So, (Lerchin) instead designed this contraption that photographs the landscape.”

The gallery will also include an armchair and two modernist bookshelves housing titles like Edward Abbey’s “Desert Solitaire,” Philippe Descola’s “Beyond Nature and Culture” and Doreen Massey’s “Space, Place, and Gender.” Lerchin said the bookshelves imply a future in which technology, like the large 3D printer, may be found in an individual’s home environment.

Using 3D printing technology not only aided in the pragmatics of the exhibition, but also served as commentary itself, Lerchin said. The medium is a reference to technology, and the objects printed – from human body parts to the boulder – represent the role humans have in imposing themselves on an environment. Design media arts professor Erkki Huhtamo said by creating the 3D printer on their own, Lerchin’s tool-building therefore becomes a part of the artistic process.

“The computer programming and the 3D printer that (Lerchin) is building define the outcome of the whole artistic process,” Huhtamo said. “It doesn’t easily fit into this traditional idea about art. It pushes the idea further into some kind of unknown territory.”

Lerchin said they drew inspiration from the various environments they have been situated in, from Washington to the Bay Area to Los Angeles. Each city had a distinct landscape, yet human interaction with it transcended boundaries. The exhibition ultimately critiques the burden created by humans forcing artificial technology on environments, they said.

“When I was an (undergraduate student) working in Walla Walla, Washington, I was dealing with the landscape there and looking at the relationship that we have to it as humans; how it can be a threat, how we affect it, how it affects us,” Lerchin said. “I think there’s a tendency to look at it as a sort of passive force that we need to control, and I think that’s deeply problematic.”