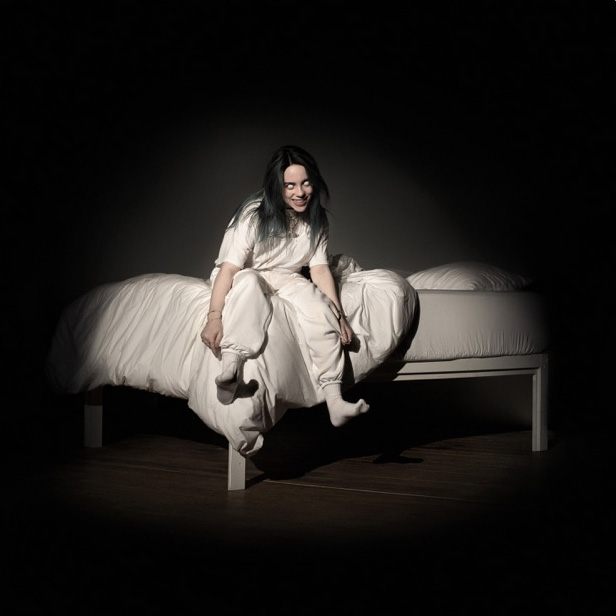 "WHEN WE ALL FALL ASLEEP, WHERE DO WE GO?

Billie Eilish unveils nighttime terrors in her debut album “When We All Fall Asleep, Where Do We Go?”

The 17-year-old singer-songwriter generates intrigue by juxtaposing her angelic voice with dark, twisted lyrics and electronic sounds. Each song in her new album relates to a different night phenomenon Eilish said she personally experiences, such as sleep paralysis or lucid dreaming, offering alternative possibilities for the unexplainable sleep states. Her lyrics – often metaphorical – make little sense but cleverly reveal her inability to wrap her mind around her subconscious thoughts. “When We All Fall Asleep, Where Do We Go?” provides the listener with a hauntingly beautiful experience, and likely one that no one has ever experienced before.

All teenagers experience teen angst, but Eilish’s way of dealing with love, rejection and insecurities is far from normal. In her album, she turns her own uncomfortable feelings into larger disturbing phenomena, singing about burying a friend and becoming her own monster. While the album is largely unsettling, her hushed feathery vocals create a beautifully strange sense of comfort throughout.

The entire album is characterized by Gothic dance beats, electronic sound effects and ethereal melodies. The LP opens with the sound of Eilish slurping before announcing “I have taken out my Invisalign, and this is the album!” which is followed by hysterical and creepy laughter. The second track, “bad guy,” has a catchy and upbeat tone and fits into the pop category more than her usual sounds. However, it remains unpredictable as she constantly introduces disturbing vocal effects, fluctuating intonation and heavy bass-like sections.

Completely swerving the upbeat tempo of “bad guy,” Eilish brilliantly juxtaposes guilt with innocence in the next track, “xanny.” The slow tempo and vibrating beats create an effect of drug-like relaxation, complementing Eilish’s satirical lyrics and melodic vocals. Electric oscillations and lyrics such as “too intoxicated to be scared” contaminate the purity of the melody, producing a mesmerizing effect that lures the listener in.

The four prereleased singles, “you should see me in a crown,” “wish you were gay,” “when the party’s over” and “bury a friend” fit quite well into the album’s theme of exploring unexplainable experiences. Probably the least grotesque of all the songs on the album, “wish you were gay” is built mainly on a traditional acoustic background and strays from chilling sound effects or lyrics. The song is about Eilish wishing a love interest were gay because she wants a reason for him to not like her back. Her wish later came true after he came out to her, she said, which likely represents her ability to control her own dreams.

Bringing back the eeriness, Eilish takes strange to new levels in “8” and “ilomilo” – best described as what a possessed doll in a haunted house would sound like. High pitched chimes and childlike inflections generate discomfort even when accompanied by lively guitar strums and groovy beats. Although every song on the album is odd in its own way, the oddity within these two tracks renders them the least appealing.

Sung from the perspective of the monster under her bed, “bury a friend” features random shrieks and dark trap beats.Through lyrics describing physical pain, such as “step on the glass/staple your tongue,” Eilish seems to describe a nightmare she is trying to escape from. Her play on innocence reappears with a verse reminiscent of a nursery rhyme but any trace of innocence is dismissed as the angst develops throughout the song.

The last three tracks end the album on a tranquil but unsettling note. “listen before i go” is accompanied by a beautiful piano ballad, but the apparent calmness is disrupted by lyrics about a suicide attempt and distant sirens toward the end. The last track, “goodbye,” echoes memorable lyrics from every track in the album in anti-chronological order, ending on Eilish accepting herself as her own greatest enemy with the lyrics “I’m the bad guy.” Her mysterious tone evokes a sense of awakening from a dreamy state in which everything she experienced during the night blurs together, making it difficult to distinguish her night visions from reality.

“When We All Fall Asleep, Where Do We Go?” unleashes Eilish’s vivid imagination as she strives to understand her own unexplainable feelings through a versatile mix of dark trap beats, ethereal melodies and electro-pop. Her music is just as unexplainable as the themes she explores, but her angelic voice generates a sense of tranquil discomfort that is both peculiar and successfully intriguing.