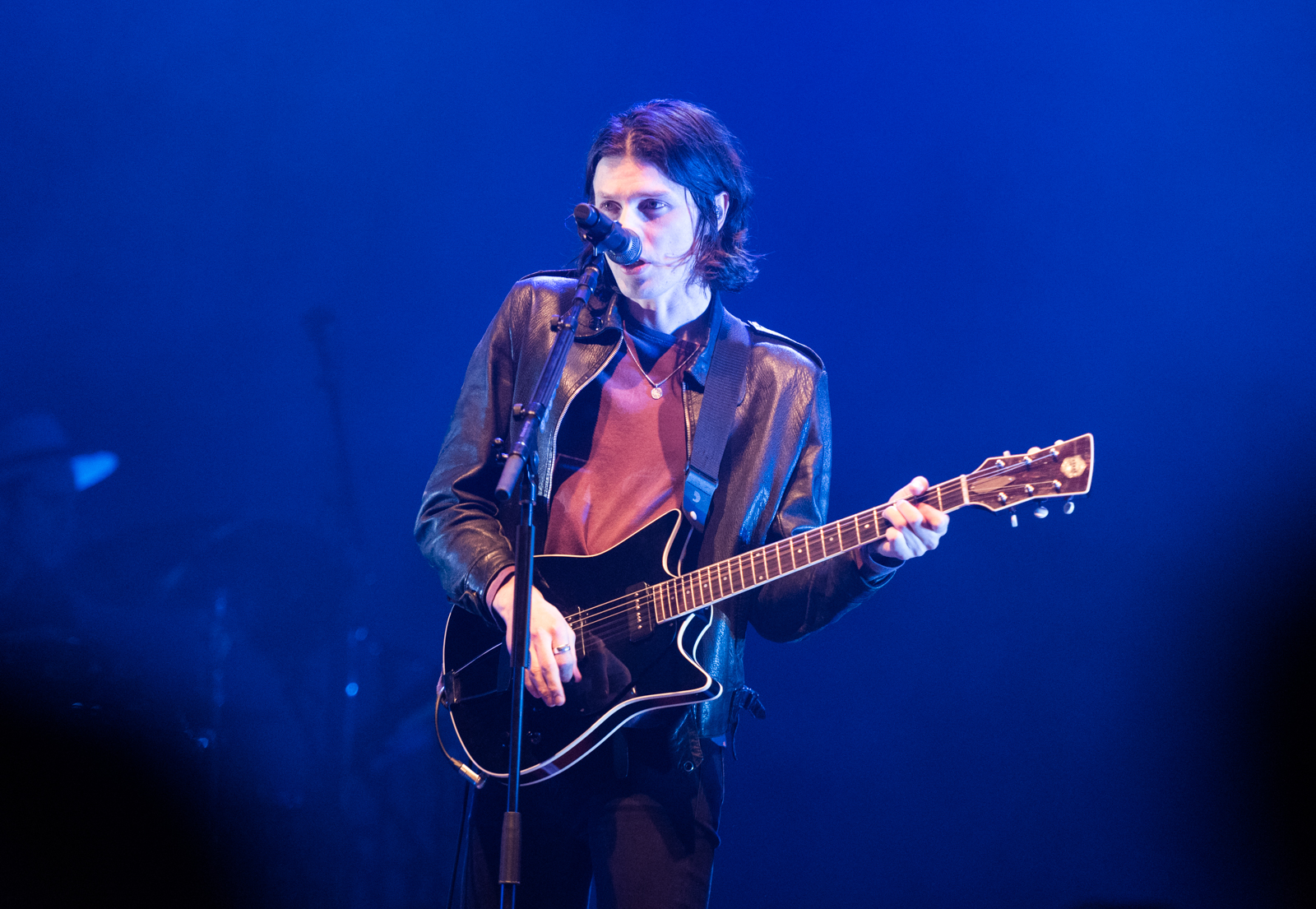 James Bay opened the Los Angeles show Monday with “Pink Lemonade.” He swapped out guitars after each song during his “Electric Light” tour set at The Wiltern. (Emily Ng/Daily Bruin)

James Bay strutted on stage in a leather jacket, wielding a jet-black guitar while strumming electricity into the air.

The indie rock artist brought melodic vocals to The Wiltern on Monday night during the Los Angeles leg of the “Electric Light” tour. Although the tour was supposed to take place last year, Bay said it was rescheduled because he needed to work on some songs. A sold-out crowd came for the performance that featured tracks from both his latest album, “Electric Light,” and his 2014 debut, “Chaos and the Calm.” Bay’s rich vocals atop the live instrumentals showcased layers of full-bodied sound more vibrant and pronounced than the ones found in the recorded versions.

Before Bay and his four bandmates flooded the hall with near-deafening beats, opener Noah Kahan welcomed the audience with rustic, minimalist tracks and wistful hair tosses. Dressed with a denim button-up and acoustic guitar, the folksy pop singer serenaded the crowd with a range of fragile refrains and soulful runs during a set that included “False Confidence” and “Hurt Somebody.” His sentimental ballad dedicated to a friend who died, “Carlos Song,” swarmed the atmosphere with heart-wrenching emotions.

In juxtaposition with Kahan’s homey appeal, Bay opened his set with a performance of “Pink Lemonade,” his slender frame rambunctiously bouncing along with the bass line. After switching guitars – which he did after every song – Bay continued the upbeat energy with “Craving,” the first track from his debut album. As he moved effortlessly between the soft verses and drum-driven chorus, beams of light oscillated between the stage and audience, creating a captivating display that immersed the crowd in the dynamic performance.

The lighting shifted to a deep blue before Bay ignited “Just for Tonight,” an upbeat song about giving in to the lust of a past romance, with his electric guitar. Though the instruments overpowered Bay’s vocals during the verses, the sheer volume exuding from the stage charged the ambiance with palpable excitement.

Soon after, the audience relaxed its rocking to a soft sway as Bay transitioned into a series of love songs, including “Wild Love.” Hot pink lighting and soothing falsettos – which some audience members straining to sing alongside Bay’s more on-key notes – set the mood for youthful spring romance.

An audience cheer and one relaxed song later, Bay performed “Us,” a fan favorite from his latest album. The ballad, notable for its dialed-back instrumentation, allowed Bay’s soulful voice to shine more than it previously did.

Midway through the set, Bay invigorated the crowd with one of his most popular songs: “Let it Go.” The chart-topper prompted a mass karaoke performance, with the audience singing its heart out alongside the crooning Bay.

Now jacketless with sweat-drenched hair, Bay and his fellow bandmate added a surprise guitar duet breakaway during the middle of the “Best Fake Smile.” Full of energy, Bay flounced around the stage, bringing the audience toward another spirited climax. The band left the stage after the song came to a close.

Bay’s encore, which the crowd anxiously awaited, featured a special performance of an unreleased song called, “Bad.” The song’s intricate falsettos and soothing chords captivated the crowd and injected romance into the air. One audience member’s scream of “Oh, my God” and the resulting laughter best summarized the feeling of the moment.

Bay’s band returned to accompany him in a cover of the Beatles’ “Come Together” as an ode to his English roots. Though Bay stayed true to the original version, his addition of a boisterous, yet drawn-out guitar solo reminded audience’s that this was a rendition, not a remake.

Bay finished his encore with his Grammy-nominated single, “Hold Back the River.” The crowd shouted along, ending the night in a culmination of carefree enjoyment. Bay thanked the crowd for sticking with him despite pushing back his concert, but the energetic highs and emotionally rich rhythms evident in the band’s music made this delayed tour well worth the wait.