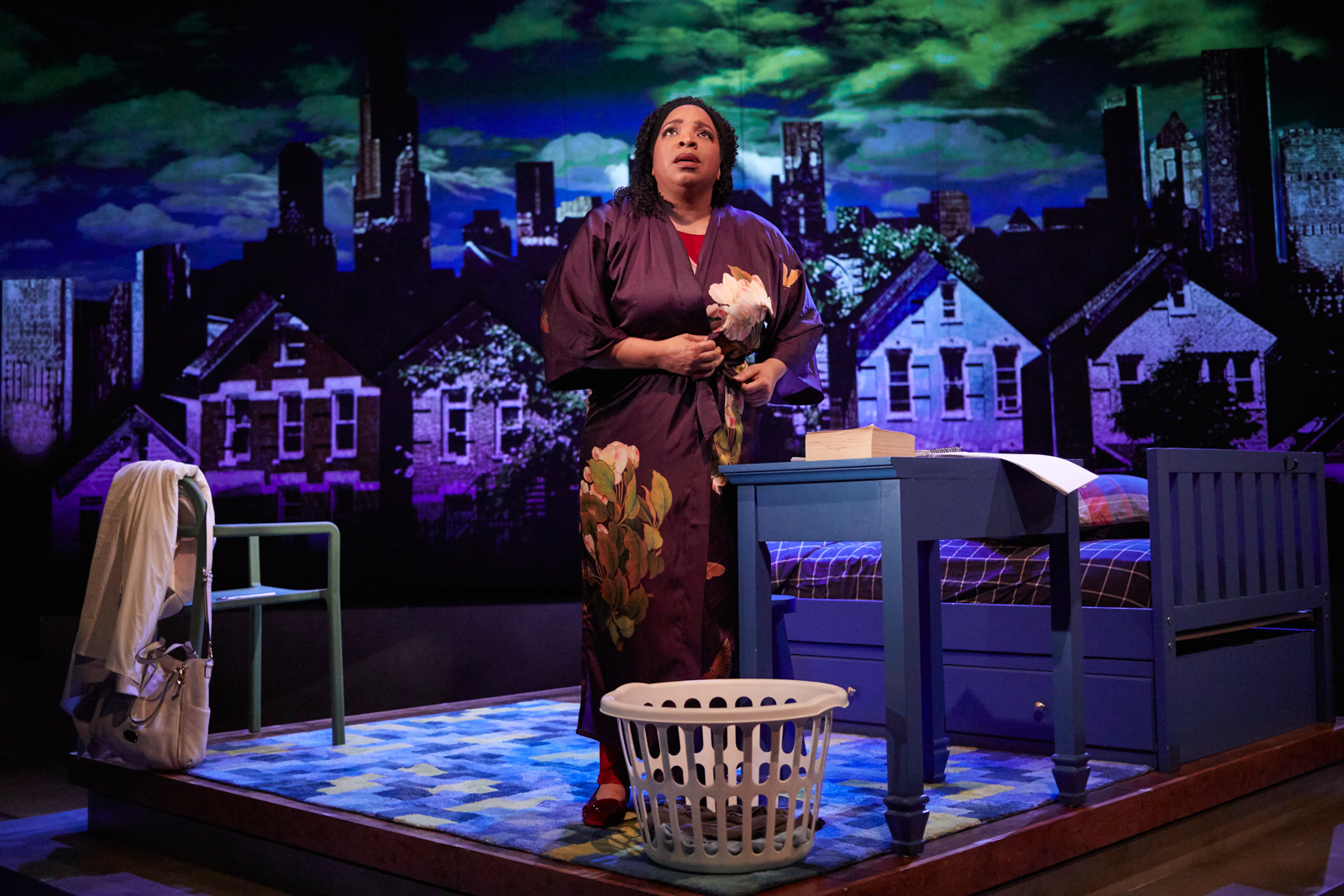 According to the average superhero origin story, tragedy leads to a path of great strength. But what happens when the hero chooses to grieve instead of fight?

Amid the discourse surrounding police brutality against black males, playwright Inda Craig-Galván challenges the brave mother archetype in “Black Super Hero Magic Mama,” which will run at the Geffen Playhouse until April 14.

The play follows Sabrina Jackson (Kimberly Hébert Gregory), a mother grieving after her unarmed teenage son, Tramarion (Cedric Joe), was killed in an accidental police shooting. As Sabrina reels from her loss, she is pressured by family, reporters, witnesses and the police to speak up. Instead, she remains silent inside her son’s room – miles away from a microphone and podium.

Because of the outside world’s demands, Sabrina has a mental breakdown that transports her psyche into the alternate universe of a comic series created by her son and his close friend, Flat Joe (Noah Abbott). As her alter ego Maasai Angel, Sabrina encounters both villains and allies while she journeys to fight the root of her grief.

Although the narrative deals with an emotionally heavy subject matter, the comic book elements successfully weave notes of humor throughout, bringing dimension to play’s tone. Hébert Gregory’s swift tongue and demanding body language were able to pull laughs from an audience that was simultaneously reaching for tissues. As Hébert Gregory waves her hands and hips to invoke the sass of a nagging mother, or dramatically puffs her chest during her hero monologues, she skillfully draws from character tropes without making the gestures feel cheesy.

The second act, which is set primarily in the alternate universe, takes advantage of a number of comic book tropes, such as leveling up and third-person narration. With quips that bash Hawkeye and the DC Extended Universe, the play employs self-awareness of its stereotypical hero plot as a tool to rake in laughs. Instead of seeming out of place, the humor cleverly reminds viewers of the playful demeanor Sabrina lost alongside her son, strengthening the audience’s sympathy towards her.

But what truly makes the play stand out are the parallels between the superhero arc and Sabrina’s grief, which are strengthened through Myung Hee Cho’s set design meant to evoke classic superhero imagery. The play is primarily set in Tramarion’s bedroom, which rests on a rotating platform. As Sabrina begins to come into her hero identity, she has many moments in which she stands strong with a weapon in hand as the platform spins, creating an image similar to the quintessential camera pan around a hero as they arrive at the battleground.

While these references to iconic hero moments tiptoe along the line of being heavy-handed, the emotional investment one feels in Sabrina’s development fuels these moments with a deeply satisfying quality. The rich sentimentality of the narrative reminds audiences that these moments became cliches in the first place because they work effortlessly when done right.

Again mirroring the standard superhero arc, the play questions whether or not the expectations the public holds Sabrina up to are justified. As referenced in the play, an admirable hero overcomes their tragedy by helping others. Batman used his wealth to suit up after the death of his parents, so Sabrina should use her platform to fight injustice.

But is it fair to impose the rules of comics onto the rules of real life? Here, the play misses an opportunity to address a key difference between the two narratives: Superheroes typically face a distinct villain responsible for the tragedy – Sabrina faces an entire political system. Though this fault in the extended metaphor wasn’t fleshed out, the superhero parallel is nonetheless an effective allegory of how an empowered person handles loss while providing a more comprehensive take on the subject.

In all, the metaphor is not a seamless match. But its fresh take on a current political issue effectively re-evaluates the publicity surrounding grief and a hero’s responsibility to themselves