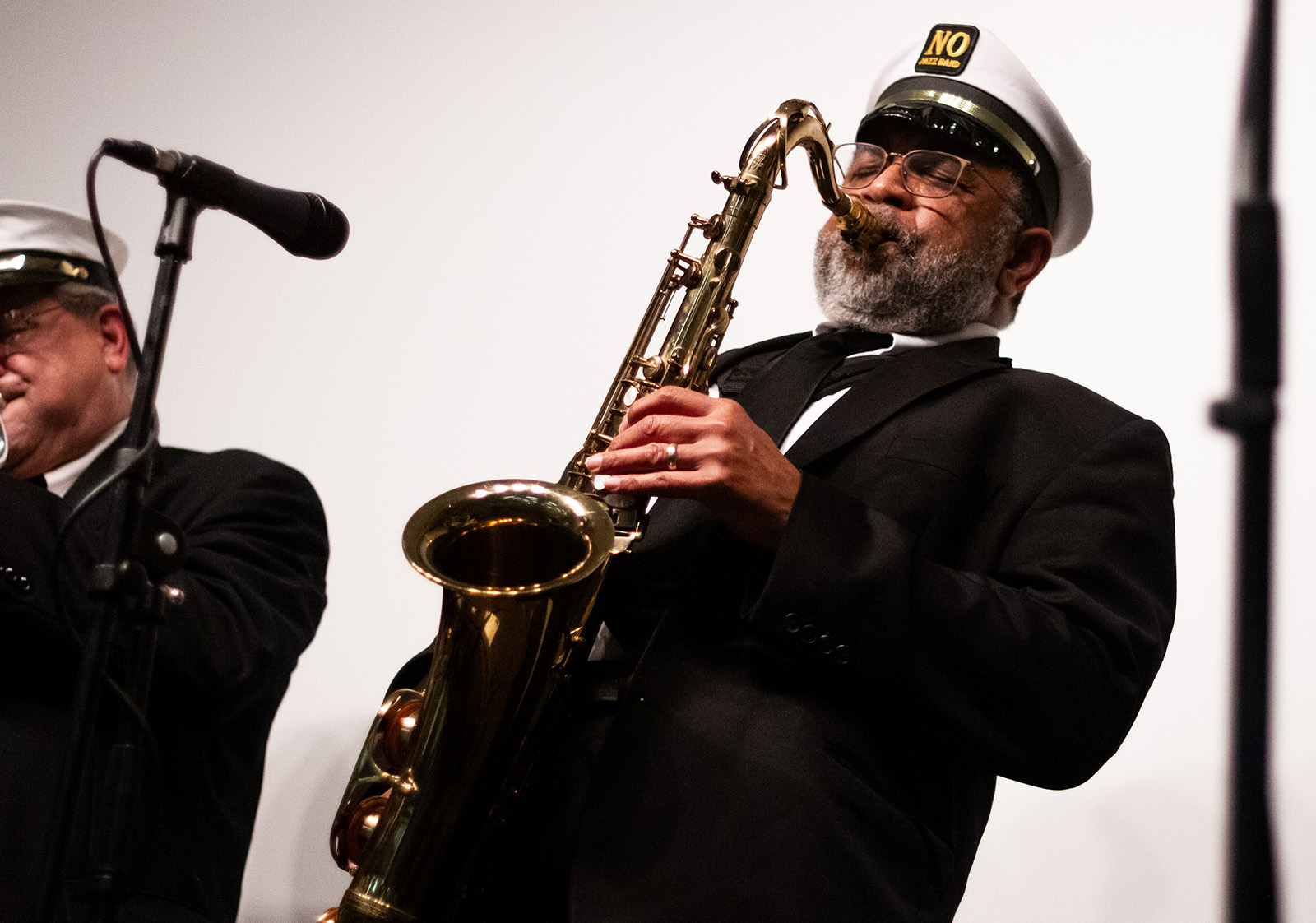 On Sunday, attendees of “Celebrating Mardi Gras,” observed a concert by the New Orleans Traditional Jazz Band. The group performed songs traditional to Mardi Gras while also discussing the history of the holiday and its association with New Orleans, said band leader and saxophonist Hilarion Domingue. Attendees later had the chance to create traditional Mardi Gras decorations like masks and jewelry.

“Blues is the grandparent of all the music we (play),” Domingue said. “(Africans) brought over rhythm and self-expression, the Europeans brought over harmony.”

The band is composed of performers from California as well as some from New Orleans like himself, Domingue said. They perform traditional New Orleans songs and blues music at parades, funerals and other special occasions. The eight band members wore black tuxedos and white hats for their set, tapping their feet and swaying their bodies on stage. The ensemble took breaks between songs for Domingue to discuss the history of Mardi Gras, the first American celebration of which occurred in Mobile in colonial French Louisiana in 1703.

About one hour into the performance, audience members jolted up from their seats and formed a second line alongside the band which played “When the Saints Go Marching In.” The parade made its way through the aisles of the auditorium, the dancing and cheering crowd following behind closely.

After leading the audience in the procession, the band departed and the arts and crafts portion of the event began. Children attendees crafted necklaces consisting of purple, green and gold colored beads. The colors each have symbolism within the context of Mardi Gras, said the Fowler Museum’s assistant director of education Allison Clark – purple for justice, green for faith and gold for power. Children decorated full-face masks as well as eye masks with colored markers, crayons and glitter glue.

Domingue had earlier touched upon the history of the masks, saying members of secret society clubs historically wore them during Mardi Gras events to hide their identities in public. Secret societies were like a fraternity or sorority, he said, for each had undisclosed features, like their own private handshake.

[RELATED: Photographer to speak on his images of traditional New Orleans parades]

Clark said she’s observed children’s ability to get involved with second line parades by dancing with the crowd or getting dressed up in feathered fans and parasols. The event incorporated children in their arts and crafts program, Clark said, because she wanted them to use their abilities to make artwork to love and be proud about.

“When you look at the photos, you can see a variety of people participating in a second line parade … including children,” Clark said. “We always encourage participants in our family program to look at the artworks presented in the exhibition (so) they can find inspiration in those images.”

Audience member Sonya Brooks, a graduate education student at UCLA, said she attended the event to learn more about her Creole heritage. Mardi Gras symbolizes freedom and celebration, and Brooks said she came to the event to see the band’s appreciation of the holiday.

“Both of my parents are Creole and they are from Louisiana,” Brooks said. “(The event) is just a wonderful example of music and culture that’s here that a lot of people don’t know about. … I am so happy to see that culture being exemplified now.”