The Quad: Is the IFC doing enough? Analyzing recent policies to combat sexual assault at frats 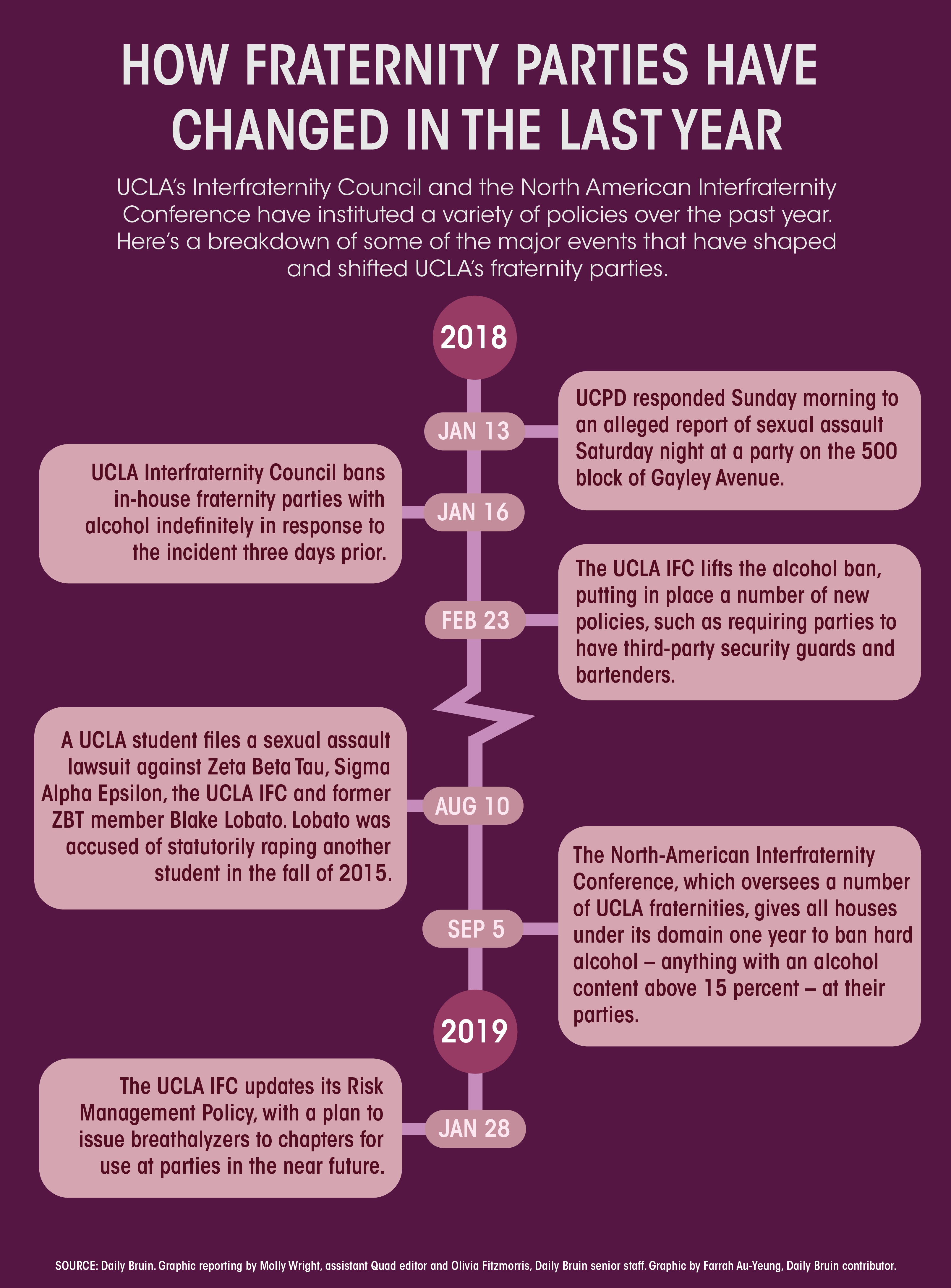 UCLA’s Interfraternity Council banned fraternities from hosting events with alcohol a little over a year ago, on Jan. 16, 2018. This came in response to the alleged sexual assault by Benjamin Orr, a member of the Theta Delta Chi fraternity and the chapter’s former president.

The next month, the IFC lifted the ban and approved a new risk-management policy involving third-party security guards and bartenders and limiting parties to certain areas of the house. The IFC banned hard alcohol from in-house events in October and they also added some additional Title IX and sexual assault trainings for members of Greek life.

Fast forward a few months to Aug. 10, 2018: A student files a sexual assault lawsuit against the IFC, the Zeta Beta Tau and Sigma Alpha Epsilon fraternities, as well as a former ZBT member for incidents which occurred in the summer of 2016.

Clearly, change is needed to prevent incidents like these from occurring over and over again, and it is the responsibility of those with power to do something about it.

As the IFC announced Jan. 28 that they plan to introduce Breathalyzers to fraternity parties – yet another implementation targeting overconsumption of alcohol – it raises the question: Are the IFC’s new policies really helping to prevent sexual assault and making students safer at fraternity parties?

Joshua Kaplan, president of UCLA’s IFC, said in a written statement that the IFC believes banning hard alcohol will lessen instances of alcohol poisoning and other alcohol-related complications. He added that third-party bartenders and security are another measure to protect students’ safety.

“Having third-party security overseeing events is an excellent measure to further strengthen the risk management that begins with the risk management teams of each respective chapter,” he wrote. “Additionally, third-party bartenders serve as a direct check on party attendees’ drinking, refusing to serve underage persons and cutting off legal drinkers when they are palpably inebriated.”

Third-party security guards at the door have two essential jobs: checking BruinCards and IDs to determine someone’s age, and then marking the hands of students who are not yet 21. These guards stay at the door all night, and they don’t actually enter the party itself.

Avyay Kuchibotla, a third-year statistics student and a member of the Delta Tau Delta fraternity, said he hasn’t noticed a big change in the party environment since the implementation of the new rules, such as the third-party security guards.

“I think security is mainly just for outside and controlling access to the party,” he said. “I don’t think they’re specifically policing, that’s still left to the students.”

Once inside the house, parties are very similar to how they were before the new rules, except for the presence of a hired third-party bartender who will not give drinks to girls who are marked as under 21.

Nikhita Vivek, a third-year economics student, said she feels safer at fraternity parties with a professional pouring the drinks.

“I know the drinks that I’m having, if I decide to have any, are completely safe. I think that’s probably the best part,” she said. “It definitely feels a little more monitored.”

On paper, having a hired bartender would seem to add order to the consumption of alcohol at a party, as these individuals can avoid giving alcohol to people under 21 or to those who appear to be too intoxicated.

However, some students have found ways to get around this obstacle to free-flowing booze. Niaz Sassounian, a second-year pre-human biology and society student said the third-party hires don’t make a big difference to the party, as it is easy to get alcohol from someone in the fraternity even if you’re under 21.

“(Guys) have all their hard (alcohol) and they keep it in their rooms and you see them walking up and down to go drink and come back,” she said. “They also take girls with them and drink hard (alcohol) so it’s like everyone just does it in secret, there’s always a way to do it.”

So even though hard alcohol is officially banned at IFC-member fraternity parties, students who attend these events have options: They can still drink beforehand, sneak alcohol in or access it from other people aside from the bartender. Heck, they can even have an older friend order a drink for them.

If the new IFC policies were solely meant to limit overconsumption of alcohol, they would still have a ways to go. But this might not be the right aspect of fraternity parties to tackle. At the end of the day, excessive amounts of tequila don’t commit sexual assault, people do.

“I understand the place that (the regulations) come from, in terms of alcohol (as) a facilitator of sexual violence, but it’s not what is conducting the sexual violence, it’s not a being that has agency,” said Sophia McMurry, a co-director of Bruin Consent Coalition and a third-year philosophy student. “So I think it picks out the wrong thing and we’d like to see it pick out the right thing, which is the values and attitudes of its members.”

Looking beyond alcohol, is the presence of these third-party bartenders and security guards doing anything to change the culture of fraternity parties?

In his statement, Kaplan wrote that the new policies had “significantly increased safety at IFC-events and have had the additional effect of a positive cultural change to fraternity life at UCLA.” Kaplan added the IFC has more in store to further protect students, such as incorporating iPads into the check-in process in order to track entry and exit of students at fraternity events.

Vivek said the new policies have made parties feel more monitored and toned down.

“It definitely affects the vibe of the party when you have a lot more security around,” she said. “But I think it would help to have at least one or two upstairs.”

If the presence of third-party security and bartenders makes the party feel more monitored, perhaps extending the terrain of security guards within the house could help rid people of the idea that other areas are somehow undetectable and without consequence.

“I know there’s staircases that go up to the bedroom, so they could put security there. You can tell if a girl or guy is not aware of what they’re doing,” Sassounian said. “Just (ask), ‘Hey are you okay? Do you want to go with this guy?’ And usually when you say that a girl gives an honest answer.”

It’s also worth looking into the approaches that other colleges use to keep fraternity parties safer. For example, the University of Virginia, as of the 2017-2018 school year, requires IFC-approved security guards at the door for major fraternity events with a list of guests who can enter. As the guards stay at the entry point, this policy is similar to UCLA’s.

Chris Hopkins – a member of a fraternity at the University of Virginia and contributor to the university’s newspaper The Cavalier Daily – wrote in November that fraternity parties were still not safe spaces for women and needed increased security.

“More sober brothers, restricting access, caps on alcohol and willingness to remove belligerents need to become the norm,” he wrote.

The University of Southern California also requires security at events with alcohol, as of the 2017-2018 school year, and they have a policy that hosts – also known as fraternity members – cannot bring guests to private areas of the house if they or the guest have consumed the equivalent of two alcoholic drinks in the last four hours.

Alma College in Michigan requires alcohol-related greek life events to have security guards from a specific vendor. These guards generally stay at the entry point to party but also conduct five-minute interior checks for student safety.

As fraternities face mounting pressure to prevent sexual assault, universities across the nation are attempting to improve their policies and ensure students’ safety. There does not appear to be a magic formula as of yet, but UCLA and the IFC can certainly continue to observe and learn from other universities’ approaches as they hone their practices.

As for the hard alcohol ban, the IFC’s policy barks up the wrong tree.

“(We) felt like (the alcohol ban) was a poor short-term solution to a systemic issue, said McMurry. “What needs to happen in order to combat sexual violence on campus and ensure a safe and protected community for our students requires education and advocacy at the level of changing values that we hold.”

The IFC should certainly scrutinize its member fraternities and the parties they throw, especially in response to sexual assault cases, but our students deserve more than a one-time, Band-Aid fix. They must feel safe at fraternity parties, and that does not mean banning alcohol, it means banning acts of sexual violence and a culture that allows them.