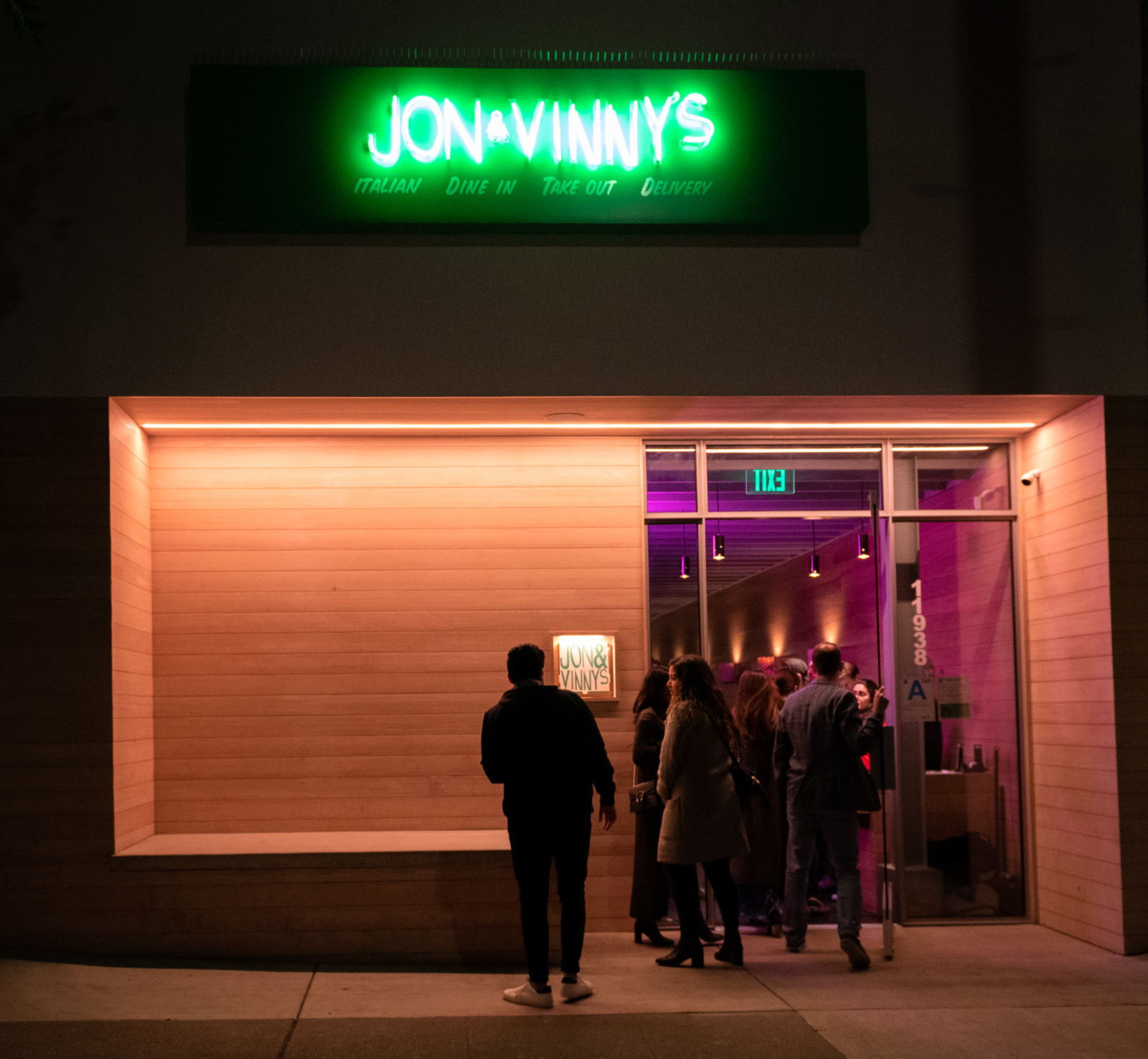 An industrial stone pizza oven, chefs gracefully tossing salt into their pasta and a glass of Cabernet make for a quintessential Italian dining experience at Jon & Vinny’s.

The restaurant on San Vicente Boulevard opened mid-January, offering the same diverse Italian menu as Jon & Vinny’s original location in Fairfax, which opened in 2015 and garnered widespread attention. The crowded but dynamic restaurant offers a menu full of pizzas, pastas, meats and wines, but at fairly steep prices.

Jon & Vinny’s maintains a minimalist exterior, decorated with wood panels and a lit-up green neon sign. The restaurant boasts a white oak aesthetic across its walls, tables and chairs, creating a casual night scene with a dimly lit interior, save for the kitchen and counter seats. Customers have a full view of chefs spinning pizza dough, toasting garlic bread over a wood fire and skillfully seasoning various dishes. Those who sit at the counter seat can feel the heat emanating from the pizza oven and from the flambeed dishes across from them.

With packed seating and an open kitchen, the place is naturally a bit loud. Jon & Vinny’s is packed during dinner hours – customers without reservations must give their names and numbers to the hostess to test their luck. Those who can snag a seat, however, will be greeted by friendly and efficient staff.

The chefs, donning aprons over their Jon & Vinny’s T-shirts, enthusiastically voiced orders to each other with dashes of casual conversation sprinkled in, as if they were trying to give customers an exciting glimpse into a gourmet kitchen. Their enthusiasm, combined with purple ambient lighting, encouraged a social, yet classy atmosphere. The service kept up with the liveliness as well, as servers promptly passed out dishes and refilled drinks for customers.

As expected of any Italian restaurant, Jon & Vinny’s offers 10 varieties of pastas made in-house. The ricotta ravioli, served with generous amounts of marinara sauce and Parmesan, provided a tasty and mostly balanced dish. The ravioli were a tad larger than bite-sized and packed with appropriate amounts of ricotta, achieving a Goldilocks balance on both accounts. Though a bit salty, the marinara sauce was smooth and provided a flavorful dipping sauce for garlic bread, served separately. For $16, the serving size was decent, but not generous, with Jon & Vinny’s establishing itself as a restaurant that prioritizes quality over quantity.

Though they also stand fine on their own, the marinara braised meatballs make an excellent addition to any pasta dish. Served with two pieces of garlic bread and a scoop of ricotta, the entree is a treat for the eyes, with chunky marinara sauce nearly flowing off the edges of the plate. Unlike the sauce of the ravioli, the marinara sauce accompanying the meatballs provides a tasty and subtle flavor, while the ricotta adds a complementary tinge of creaminess.

The garlic bread, being a side item, was an unexpected highlight – toasted just enough to give the thick pieces a crispy outside while maintaining a soft inside. The well-seasoned garlic butter was spread generously and gave the bread a savory flavor. At $17.50, the dish is in line with the rest of Jon & Vinny’s expensive menu, but is one that can live up to its price tag.

For dessert, Jon & Vinny’s offers a variety of cookies, soft serve and other Italian desserts such as cannoli and budini, many of which are displayed in a two-shelf glass box next to the counter seating. The snickerdoodle is a reasonably sized serving at $2.50, with a chewy texture that delivers a subtle cinnamon flavor without being overly sweet. Having cracks throughout its surface and a light, even coat of cinnamon, the coaster-sized cookie is a short and sweet way to end a meal.

With an energetic vibe and a tasty selection of Italian food, Jon & Vinny’s is the perfect place for anyone in search of an upscale location to savor a good meal with friends. As with any high-end restaurant in Los Angeles, however, the prices of multiple dishes can easily add up, and an automatic 18 percent service charge makes the bill an even tougher pill to swallow. Jon & Vinny’s certainly is the place for a special occasion, but not the one for casual eating. Though I will inevitably crave more of Jon & Vinny’s Italian dishes in the future, my wallet and I might just have to settle for Covel.