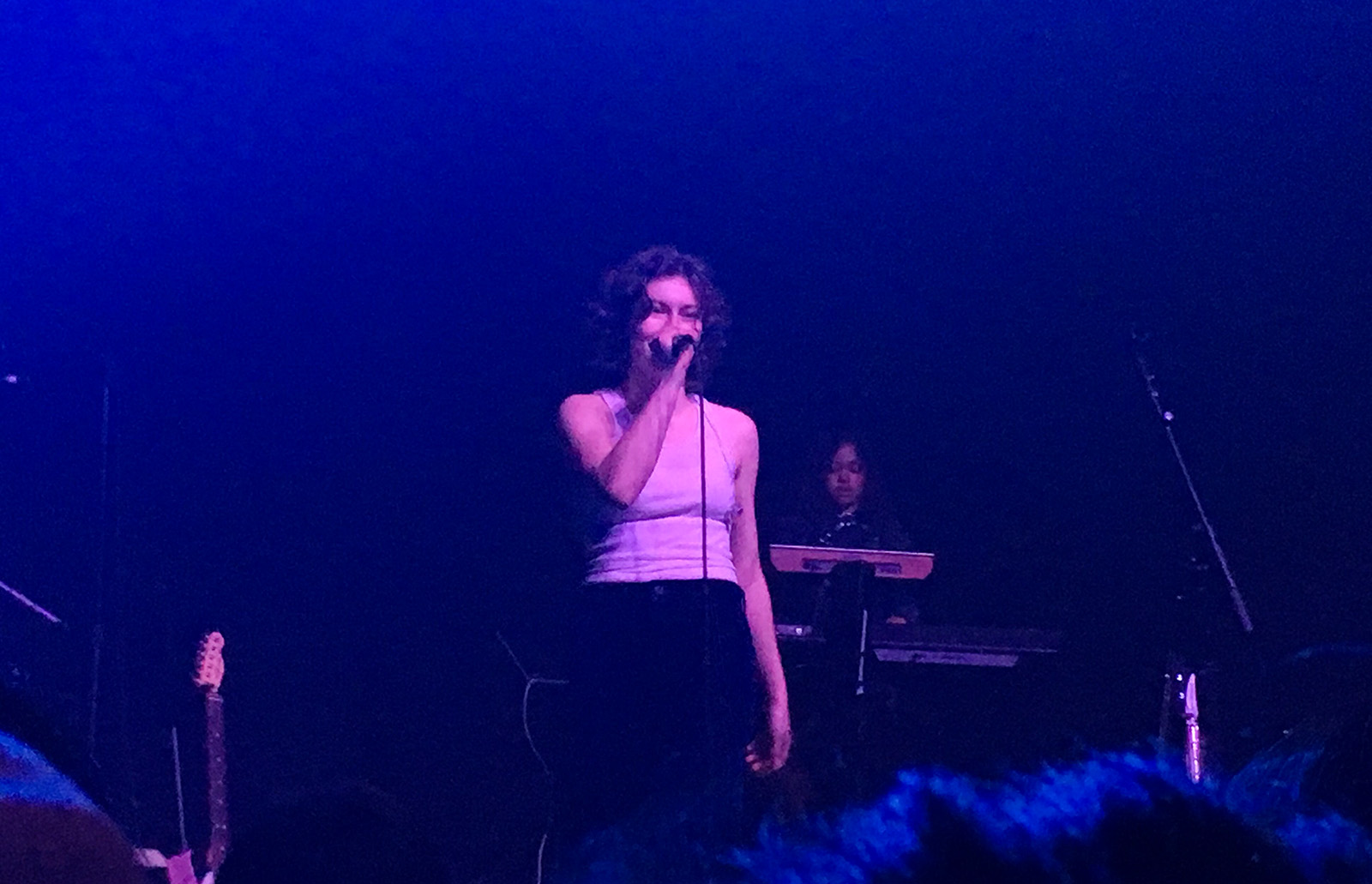 King Princess took the stage for her “Pussy is God” tour stop at the Fonda Theatre wearing a white tank top and blue velvet pants. The alternative singer remixed popular songs such as “1950.”
(Courtesy of Kaia Sherry)

King Princess disappeared into a thick plume of smoke, Juuling to the deep thrum of the bass.

Establishing herself in the pop world, the 20-year-old alternative artist burst onto the scene in early 2018 with her single “1950,” which she describes as an ode to unrequited queer love. Her unapologetic public image, complete with a foul-mouthed lexicon and unshaved armpits, quickly garnered her a receptive audience, particularly within the LGBTQ community. Performing at the Fonda Theatre on Thursday night for the “Pussy is God” tour, the young singer added a raspy edge to her growing repertoire by incorporating bluesy guitar solos into her softer, low-key songs.

Before King Princess took the stage, Australian artist Banoffee appeared in darkness, garbed in a fluorescent green cardigan. Banoffee amped up the energy in her electropop set, giving an engaging performance – the singer relinquished vocals altogether in her final song, allowing her looped vocals to reach a final dramatic climax in repetitions of “I’m Not Sorry.” Following Banoffee, an unnamed drag queen pranced onstage to enthralled cheers, miming out a brief skit to early-2000s vocal acrobats like Christina Aguilera and JoJo.

Despite headlining the show, King Princess casually strolled onstage with the air of a garage band vocalist, lightly engaging the audience with a brief, expletive-laden greeting. Ordering her setlist with little rhyme or reason – a perfect reflection of her rebellious persona – the artist began with the groovy “Useless Phrases” before transitioning smoothly into the rhythmic “Cheap Queen” with a few plucks of bass. Donning a white tank and velvety, blue pants over her small frame, the singer cheekily proclaimed her ability to make grown men cry, all while twirling her curly bob.

Her set then moved to more melancholy moods, singing about the sudden reappearance of a past lover in “Best Friend” in what was possibly the poignant peak of the night. Though her starting croons held the levelness of a healed heart, the ending lines were laced with an edge of anger indicating otherwise. Sheathed in a halo of blue light, King Princess closed her eyes, tensing her shoulders at the crux of the song. Similarly, the following tune “Waiting on This House to Burn Down” approaches a crumbling relationship with a shrug and a careless flick of a Juul.

After a brief fake-out of her song “Holy” – the singer laughingly said the vocals were too high – King Princess launched into her breakout hit “1950.” The live version proved to be less demure than its mellow studio counterpart, intertwining Jack White-esque licks beneath the expected E-major piano chords that guide the song’s melody. Transformed into a fiery rock ‘n’ roll anthem, King Princess’ voice could scarcely be heard over the crowd bellowing every lyric. The song, placed oddly in the middle of the show rather than as the finale, worked far better in its alternative rock reworking, adding a pulse to a lyrically insightful song.

Tuning her guitar, she then jumped into the bluesy “Prophet,” red and purple tones highlighting the suggestive movements of her hips. After playfully winking at audience members, the artist began an impromptu Q&A, taking questions from raised hands in the audience. Hinting at the release of her new album, King Princess ended the session by denying a fan use of her Juul, jokingly alluding to contracting strep throat. Proudly introducing her provocative song “Pussy Is God,” the singer said, “This isn’t question time – it’s time for a big pussy song.” She delivered as promised, her sultry vocals complementing the sexual content of the song.

As her final song of the night, King Princess performed “Talia,” reworking in a similar way as “1950” by adding a bluesy-rock vibe to an originally synth-driven song. The crowning moment came with the added instrumental, an intense drum-guitar playoff culminating in King Princess’ pleading vocals, their raspiness more indicative of grief than stylistic flair. The two encore songs, “If You Think It’s Love” and “Ohio,” brought the concert to a calm close.

Bowing out with a cheeky smile, King Princess captured the rock-edged tones of the night with a final strum of her guitar. 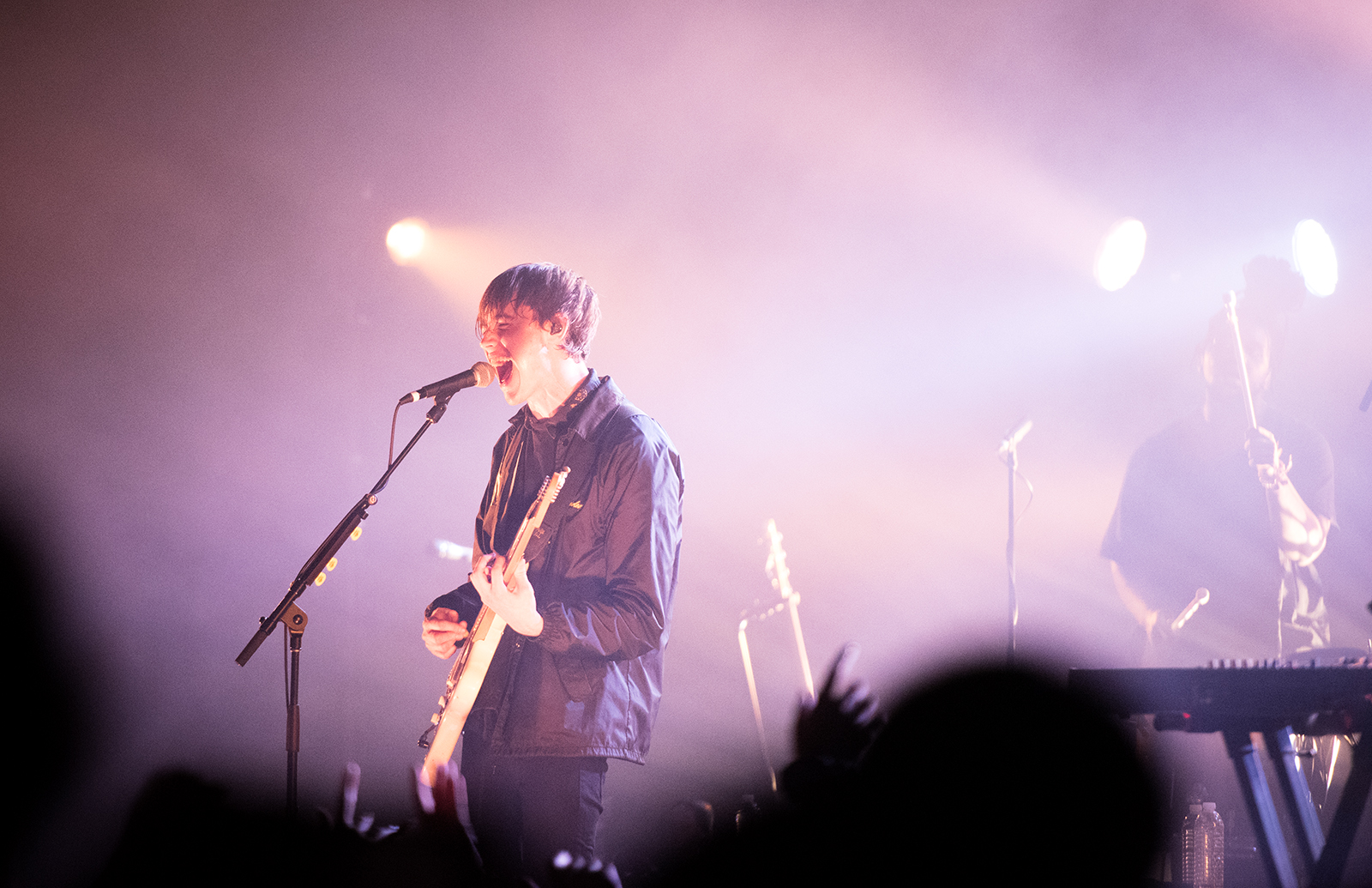